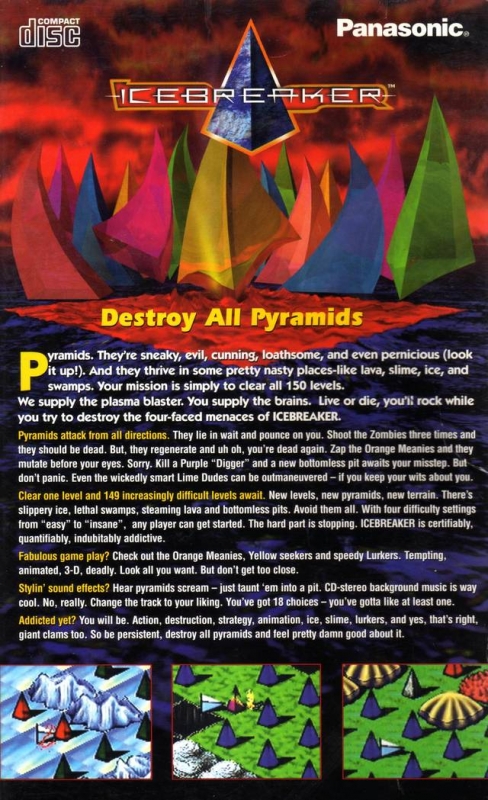 Pyramids. They're sneaky, evil, cunning, loathsome, and even pernicious (look it up!). And they thrive in some pretty nasty places-like lava, slime, ice, and swamps. Your mission is simply to clear all 150 levels.
We supply the plasma blaster. You supply the brains. Live or die, you'll rock while you try to destroy the four-faced menaces of ICEBREAKER.

Pyramids attack from all directions.
They lie in wait and pounce on you. Shoot the Zombies three times and they should be dead. But, they regenerate and uh oh, yuou're dead again. Zap the Orange Meanies and they mutate before your eyes. Sorry. Kill a Purple "Digger" and a new bottomless pit awaits our misstep. But don't panic. Ever the wickedly smart Lime Dudes can be outmaneuvered - if you keep your wits about you.

Fabulous game play?
Check out the Orange Meanis, Yellow seekers and speedy LUrkers. Tempting, animated, 3-D, deadly. Look all you want. But don't get too close.

Stylin's sound effects?
Hear pyramids scream - just taunt'em into a pit. CD-streo background music is way cool. No, really. Change the track to your liking. You've got 18 choices - you've gotta like at least one.

Addicted yet?
You will be. Action, destruction, strategy, animation, ice, slime, lurkers, and yes, that's right, giant clams too. So be persistent, destroy all pyramids and feel pretty damn good about it.