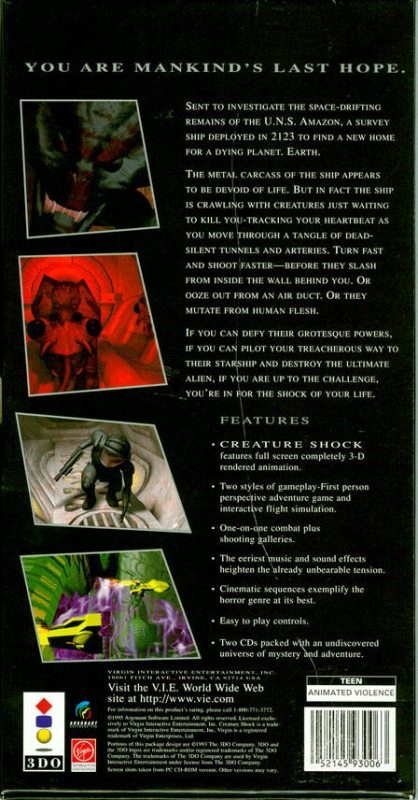 Get ready for the fright of your life.

Your heart is pounding. Your pulse rate is rising. Your mind is racing. You can taste the sweat from your brow. You have no idea what lurks around the next corner.

But you know it won't be pleasant.

In the 22nd Century, the Earth is experiencing overpopulation and environmental destruction on a critical scale. Three ships are launched to search the solar system for a suitable second home. Four years later, as the UNS Amazon nears Saturns, all contact is lost, save for the faint signal of an emergency distress beacon.

There's something out there. Something very large, very alien and evidently very unfriendly...You are mankind's last hope, sent to investigate the space-drifting remains.

The metal carcass of the ship appears to be devoid of life. But in fact the ship is crawling with creatures just waiting to kill you. Tracking your heartbeat as you move through a tangle of dead-silent tunnels and arteries. Turn fast and shoot faster - before they slash from inside the wall behind you. Or ooze out from an air duct. Or they mutate from human flesh.

If you can defy their grotesque powers, if you can pilot your treacherous way to their starship and destroy the ultimate alien, if you are up to the challenge, you're in for the shock of your life.