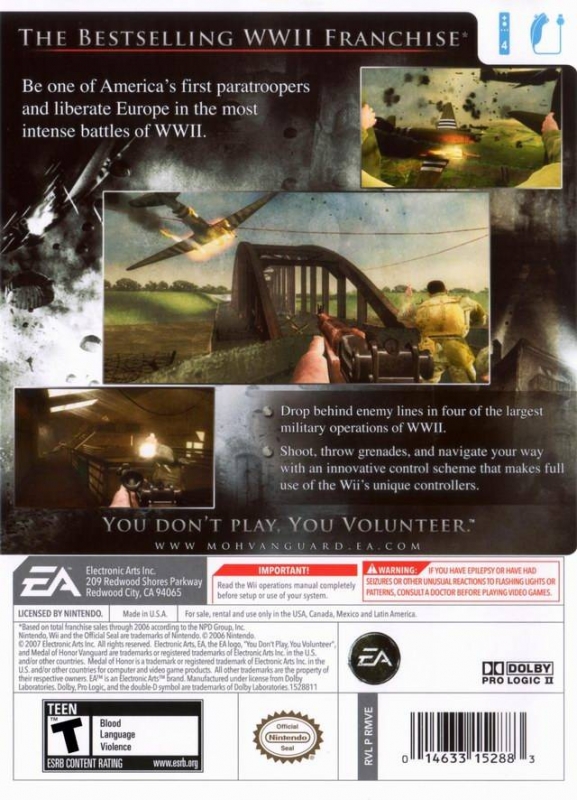 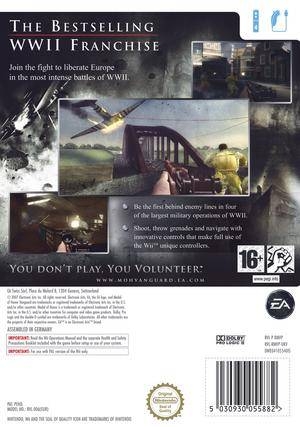 To say first-person shooters based on World War II are a dime a dozen might be putting it mildly. There are still some great ones every now and then, such as Call of Duty 3 on the PlayStation 3 and Xbox 360, but even the best WWII games are getting dangerously close to having their top-notch gameplay overshadowed by the "been there, done that" feeling you get from doing the same or similar missions over and over again. There's no great gameplay to be found in Medal of Honor: Vanguard, so there's nothing to hide those feelings of déjà vu that you'll get when you play it. Nearly everything in the game has been done before, and it has all been done better.

Vanguard places you in the role of Frank Keegan, a paratrooper in the 82nd Airborne division. Each mission is set up with a bit of black-and-white footage narrated by Keegan, followed by a brief cutscene once the mission starts. It's the same basic story from previous games, and you're not likely to give it a second thought. There are four campaigns, each of which is divided into two to four missions. You'll be fighting in Italy, France, the Netherlands, and Germany, doing just what you'd expect to be doing in a WWII FPS. You'll plant charges on enemy antiaircraft weapons, procure documents, rescue missing soldiers, clear bunkers, use bazookas on tanks, and shoot a ton of Nazis. You'll get to do a little bit of parachuting here and there, but there's nothing to it--you have a tiny bit of control over where you land, and it doesn't matter a whole lot where you end up. There's no online play to speak of. This isn't a huge shock on the Wii, but considering that other Medal of Honor games for the PS2 have had online play, its omission is notable. You can play some split-screen multiplayer if you'd like, but come on--this is 2007, not 1997.

Even if you can look past the clichéd mission objectives, there's plenty of other issues to bring you down. Enemy artificial intelligence is atrocious. Nazi soldiers exhibit no advanced tactics, unless you count ducking their heads back behind cover for a few seconds after bullets whiz past as an advanced tactic. Even if they do seek some sort of cover, they'll just stick their heads back out in a few seconds so you can shoot them. The soldiers you fight with are just as brain-dead, and it's almost comical to watch your group fight the enemy--everyone's in plain sight, but nobody's hitting anything.

One of the biggest problems is horrible hit detection for bullets. It routinely takes two or three shots to register a hit, if it registers at all. Most weapons have terrible range, so you've got to get pretty close to your target to get a kill. Nazi soldiers don't seem to have this problem and can easily hit you from any distance, through even the smallest openings. It makes it pretty tough to find cover when you can't see who is shooting you, or even discern the enemy's general location. You don't have a health bar, but your screen grows red as you get hit, so you've got to take cover to regain health. Even this system, which has been used in countless other games, doesn't work very well. You're frequently given very little warning that you're getting hit and near death; sometimes just one or two seconds pass from the first shot to the last. All of these problems are at their worst near the end, when the developer tried to make up for the game's brevity (you can beat it in about six to eight hours) by making the last two missions ridiculously difficult. The checkpoints are few and far between, and you're getting shot from all angles. It's extremely frustrating and not much fun.

Like most of the other first-person shooters on the Wii, Vanguard has been saddled with lackluster controls. The basic controls are fine, and being able to look around corners is a nice touch. Once you get a hang of aiming and looking around with the Wii Remote, you'll find that it offers much more precision than the PS2's analog sticks. But because many of your moves are mapped to the hard-to-reach face buttons of the remote, you'll find yourself accidentally moving the remote and thereby altering your aim when you try to change weapons or select a grenade. Don't even bother trying to move the remote forward to melee--you almost always mess up your aim and miss. You move around by using the Nunchuk's analog stick, and this works well. The problems come with the more advanced controls. The Nunchuk's buttons are used to change your stance from prone to crouching to standing, but you can also do this by moving the Nunchuk up or down. It doesn't take much movement to make this happen, and you'll often wind up crouching or standing up at very inopportune times. You can turn 180 degrees by moving the Nunchuk quickly to the left, but if you move it to the right, you reload your weapon. Needless to say, mixing these two up is an easy and often fatal mistake.

Thanks to some muddy graphics, it's often difficult to figure out who's shooting you.

Medal of Honor: Vanguard looks pretty much like every other WWII game out there, though it looks a little better on the Wii compared to the PS2 version, thanks to widescreen and 480p support. The frame rate isn't all that fast, but it's usually consistent, slowing down only when things get really hectic. You'll fight in bombed-out villages, fields, and churches, as well as inside war-torn homes. Most of these locations aren't very interesting, though there are some nice touches here and there, like when you look up in the sky and see it filled with paratroopers. Very little of the environments are destructible, and outside of some decent-looking smoke, the effects aren't much to get excited about. There are lots of browns, grays, and greens, which makes it hard to discern enemy soldiers from their surroundings unless they're firing their weapons. There are some decent enemy death animations, but they often take place a full second or two late, which makes them look quite silly. Probably the game's best aspect is its audio. You'll recognize the main theme from previous Medal of Honor games, and the orchestral soundtrack kicks in when the action gets intense. The game's sound effects are good, and while the voice acting isn't remarkable, it is helpful. Your fellow soldiers will warn you to get down when you're getting shot and even point out enemy locations from time to time.

With so many World War II games already on the market, just being average isn't enough anymore. In many ways, Medal of Honor: Vanguard isn't even average; it does too many simple things poorly and does nothing particularly well. There's really no reason to pick it up on the PlayStation 2, and thanks to a higher price tag for the Wii version, there's very little reason to buy it for the Wii, either.