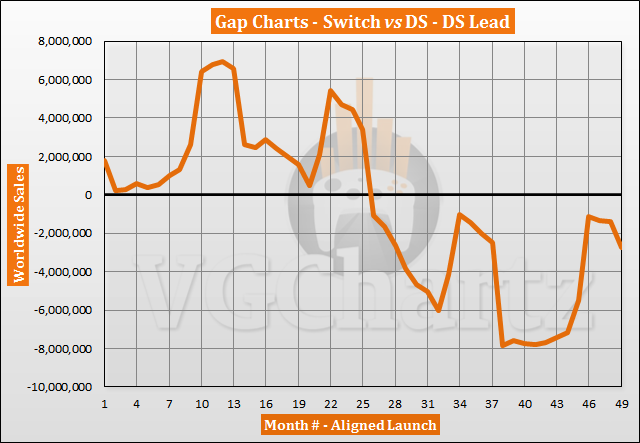 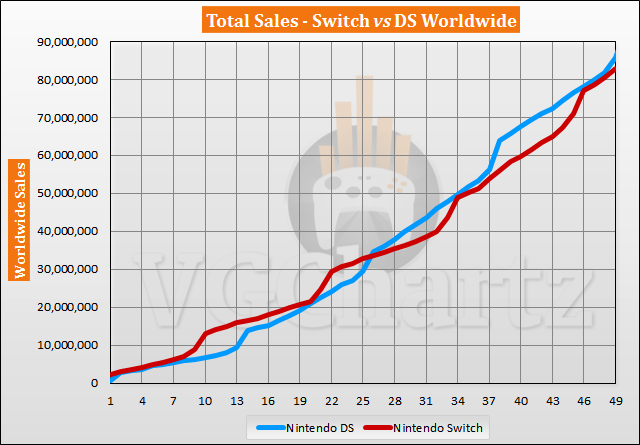 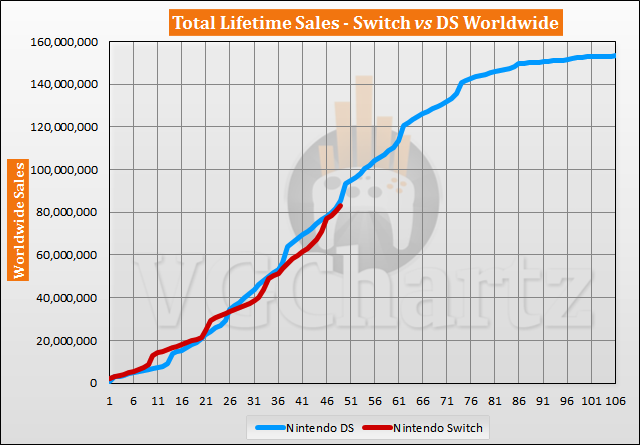 March 2021 is the 49th month that the Nintendo Switch has been available for. During the latest month, the gap grew in favor of the DS by 1.37 million units when compared to the Switch during the same timeframe. In the last 12 months, the DS has outsold the Switch by 244,016 units. The DS is ahead of the Switch by 2.74 million units.

The 49th month on sale for the Nintendo Switch is March 2021, while for the DS it is November 2008. The Switch has sold 82.93 million units, while the DS sold 85.67 million units during the same timeframe.

If the Switch continues along its trajectory then we might be looking at the best selling game console of all time. That's nuts.

it has to sell almost twice as many as it has sold so far, that is a difficult proposition

Just depends on how long until the replacement. If it sells 25 million+ this year, even a 5 million decrease per year in subsequent years would nearly make it.

I hope switch ends up being the best in the end

DS will reach 100M first (in 6 months) and most likely be overtaken by Switch 3/4 months later, just to be overtaken by DS again 2 months after that. The tug of war of those two giants will be legendary.

And who ever thought this comparison would be happening 4 years ago?

I see Switch surpassing DS this Holiday for a few months, then DS going up again, after that we will se how strong Switch Legs are.

We are in the Middle of DS peak and Switch is still competitive AF.
All Switch has to do is not dropping like a rock the last years of sales and it'll become the biggest system of all time, having a slighlt disadvantage right now is fine.

I think the Switch will outlast the DS by a year but will still drop extremely quickly after that.

I think the Switch can permanently surpass the DS around month 70, December 2022 and not look back. Maybe even earlier.

I think it will continue to be competitive until the 2011 holiday seasons for the DS which will be in month 85.

It's really really going to depend on when the successor launches. I expect the switch 2 to be backwards compatible. So the current switch sales will dry up when the new one launches.

But 2025 is my guess for the replacement. So you'll probably be correct.

If it launches then it will have a similar lifecycle to the Xbox 360, I am guessing the drop will be close to the DS drop but will still be able to maintain the holiday seasons well which will let it surpass the DS in the 2011 holiday seasons when the DS stopped selling during holiday seasons.

To be honest, at this rate. I'm surprised it has not been compared to the PS3 and Xbox 360 combined. I made a video about it and it is extremely close.

I just see them stopping production of the current switch very soon after the replacement. And especially if it's fully backwards compatible.

I expected this, thank you. I shared the article a lot.

Pretentious they are I believe those who can say which one will win.

Did you maybe mean presumptuous?

I thought pretentious was a correct English word here. But yours sounds better.

what games generated such a peak in sales for the DS during the next few weeks? Specifically 46 to 51.

Holiday season. The peaks are always holiday seasons. Month 50 is December 2008 for the DS.

Even though the Switch sales are amazing I don't think it can compete with the DS's.

Why is that ? Switch has only 71.2 millions units to sell to outsell the DS and still has yet to have a price cut for both of it's models + there is a revision on the way. Knowing it is currently outpacing last year, let's say it ends up performing around the same 28 million units, leaving like 46 millions units to be sold in 3-4 years. Let's say it has a big drop next year and ends up selling 20 millions, it would need to sell only 26 in 2-3 years. I honestly have little faith it won't become the best selling console of all time if Nintendo nails Botw 2, Metroid Prime 4, Bayo 3, the next Pokemon and Mario games and if the revision is well received to make sure it keeps a great momentum.

Yes, you're right, I guess it's not impossible. I would be happy if that happens because I love Nintendo.

Same, I feel like after this year we will know how likely it is to happen. Going from the Wii u to maybe the best selling console of all time is hilarious to me.