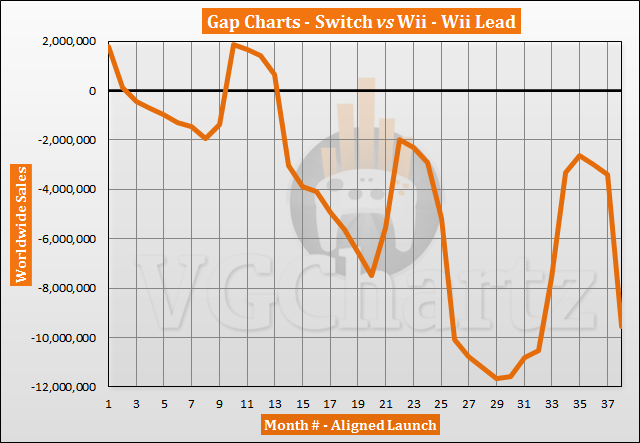 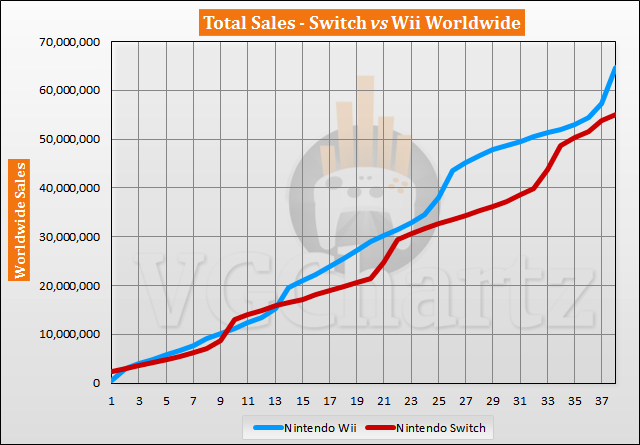 April 2020 is the 38th month that the Nintendo Switch has been available for. During the latest month, the Wii grew its lead over the Switch by 6.18 million units when you align the launches of the two consoles. In the last 12 months the Switch has outsold the Wii by just 507,499 units. The Wii is currently ahead of the Switch by 9.56 million units.

The Wii launched in November 2006, while the Nintendo Switch launched in March 2017. Therefore the holiday periods for the two consoles don’t lineup, which is why there are big increases and decreases. The Switch has sold 55.08 million units, while the Wii sold 64.65 million units during the same timeframe.

The Wii sold 101.63 million units worldwide during its lifetime. The Switch needs to sell another 46.55 million units to outsell the Wii.

I love how the graph shows the future sales of the Wii as well. Great job!

That was a suggestion from the community last month. It is something I never thought of doing, but it adds a lot to the Gap Charts to show people how well the older console has sold.

@trunkswd It would be great to have year markers too. And markers for holiday seasons. Keep up the good work!

@trunkswd I think one of those suggestions was from me. :) Great to see this site always responds to suggestions when it can.

I'm all for suggestions on improvements to the site and all the original sales articles I write.

Love the last graph, it gives the whole picture

I agree it is a nice addition. Have to thank some people from the community making the suggestion.

There's a chance that Switch will take the lead during holidays this year. It depends a bit on the forthcoming games and hardware shortages.

I wish graph shows when is switch and wii holiday season

The Wii's (and the DS's) momentum began petering out around that time, but right now, Nintendo has a stronger hold than ever of the market with the Switch. :X

This graph makes me skeptical again on the idea that the Switch can reach 120 M.

Wii sales were fairly frontloaded compared to most video game consoles. PS4 was a fair amount behind the Wii when you align the launches, but PS4 has had stronger legs and has now sold 10 million units more than the Wii, and counting.

It actually make me more optimistic, since the Wii reaches a plateau way early, in its 5th year, while the Switch doesn't seem to be stoppable at this point

Just wait a bit when the Switch will look TWO gen retarded compared to the 2 other guys.

Yup, once Switch is two generations behind, it will turn out that PS and Xbox consoles are still incapable of running Nintendo games. I wonder how the market will react to that.

@Amnesia I'll give you the benefit of the doubt, especially since I don't know if English is your first language, but in the future do not use the word retarded.

To clarify, I didn't mention English perhaps not being your first language to insult you or imply that your English is bad. I just noticed that your profile says you're from Hungary, and maybe you're not fully aware of what words may be considered offensive.