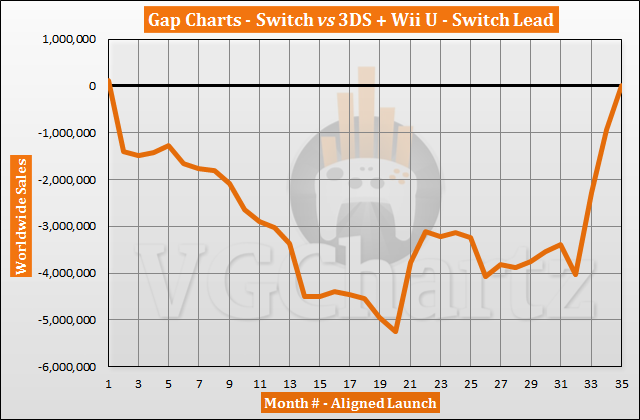 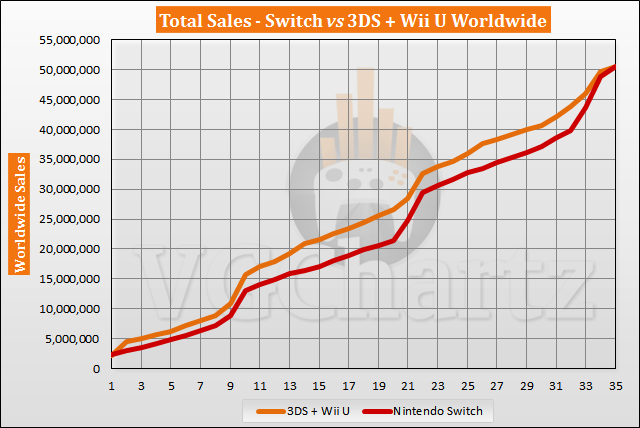 January 2020 is the 35th month that the Nintendo Switch has been available for. During the latest month the gap grew in favor of the Switch by 923,034 units when compared to the combined sales of the 3DS and Wii U during the same timeframe. In the last 12 months the gap has grown in favor of the Switch by 3.22 million units. The Switch has nearly closed the gap and is now just 3,163 units behind.

The 3DS launched in February 2011 (however, 3DS sales have been aligned to March 2011, since it only launched at the end of February in Japan), the Wii U launched in November 2012, and the Nintendo Switch launched worldwide in March 2017. The Switch has sold 50.51 million units, while the 3DS and Wii U have sold 50.52 million units during the same timeframe.

The 3DS and Wii U sold 88.68 million units lifetime through January 2020. The Switch needs to sell another 38.17 million units to outsell the 3DS and Wii U. The Wii U has been off the market for a few years, while the 3DS is still on the market. However, 3DS sales have shrunk considerably and is only selling a few thousand units per week.

The beginning of the end for 3DS+WiiU.

They put up an admirable fight, well the 3DS did anyway.