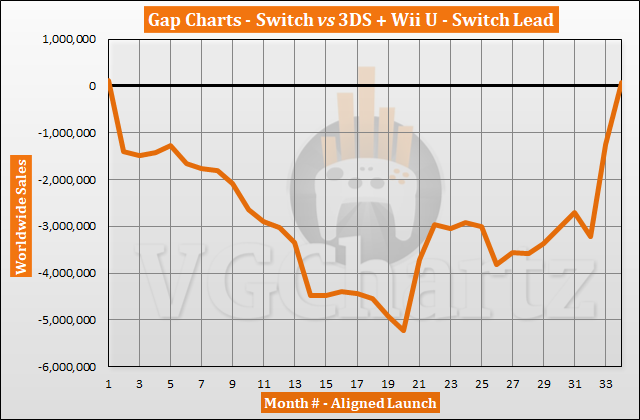 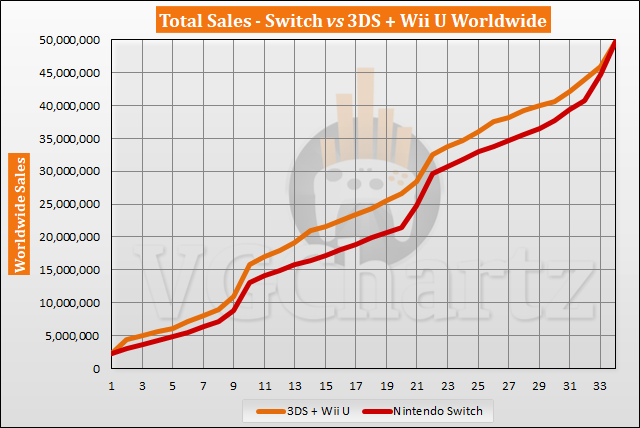 The 3DS launched in February 2011 (however, 3DS sales have been aligned to March 2011, since it only launched at the end of February in Japan), the Wii U launched in November 2012, and the Nintendo Switch launched worldwide in March 2017. The Switch has sold 49.81 million units, while the 3DS and Wii U have sold 49.73 million units during the same timeframe.

that really tell you how successfull Nintendo is this generation

3DS lifetime sales were meh. But the 3 years were at least great. Switch doing better than it withouth a pricedrop is a good results. Not to mention that yeah Wii U was horrible but it's something, so 3DS+something < Switch is great to see.

And from here on out.... the switch will only see them in the rearview mirror.

That gap will keep widening. I wonder what the next goalpost will be.

It's gonna be a massacre.

thats not a useful comparison. DS + Wii sold more than 250 million units combined lifetime. It wont happen ever again that the video game systems from just one company sell those numbers in one generation.

We know who will win the comparison, but that’s not the point. The point would be to measure the Switch vs Nintendo at their most successful.

The DS can't not anymore be compared with any portable system today, there was no smartphone at that time. And the Wii was a marketing degeneration, somehow they just managed to convince too many fat women that they could lose weight + keep busy the children in one product. This kind of fluke can not happen twice.

iPod Touch came out in September 2007 so DS survived a little bit of smart device competition.

Interesting that so many people are actively against the idea. I’ll respect that and not suggest the concept again even though it still interests me. At least I should be able to track it by using the existing gap charts.