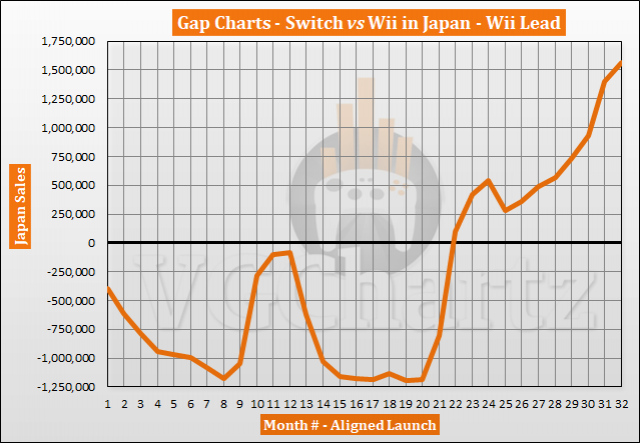 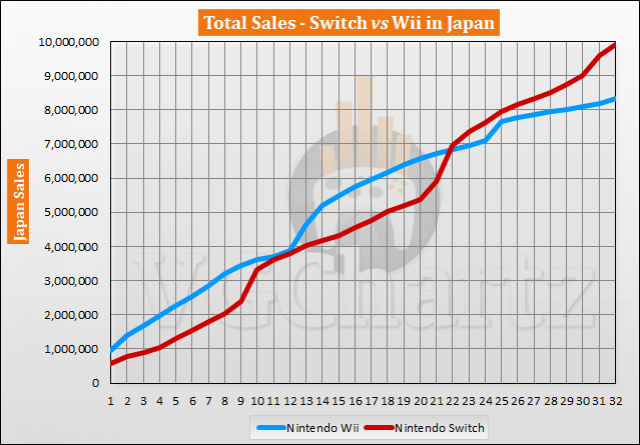 October 2019 is the 32nd month that the Nintendo Switch has been available for. During the latest month the Switch increased its lead over the Wii by 158,382 units and by 2.75 million units in the last 12 months. The Switch is currently ahead of the Wii by 1.56 million units.

Shouldn't that be Switch lead in the graph instead of Wii lead?

So Switch will surpass Wii lifetime sales within roughly 3 and a half years. Not that bad. Oh well, can we please get a Chart 3DS -vs- Switch in Japan? Would be pretty awesome :-) btw. just to mention: 3DS currently is about 3.5 million ahead of Switch. ;-)

Why the Wii was so weak in Japan compared to the rest of the world ?

Japanese third parties didn't want to make games for it. In America and Europe there were notable third party IPs like Guitar Hero, LEGO, Skylanders and Just Dance that released more or less on an annual basis, but in Japan it was for the most part on Nintendo to release software that had a positive impact on hardware sales, so the total number of impactful titles was notably lower than in America and Europe. That's why the Wii tapered off faster in Japan than the rest of the world.

The Wii's decline in America and Europe is a similar story. After 2010 there wasn't much software anymore, neither from Nintendo nor third parties. The DS had better software support for a longer time, so its sales curve turned out healthier than the Wii's. Unsurprisingly, the same thing will determine how far Switch can go.

Nintendo abandoned the Wii in 2010 to invest in the launch of its two new consoles, which cost long-term console sales. Since it had two consoles, one year after another to invest, it couldn't keep up the flow of games and the latest major games released, such as Skyward Sword and Other M, are very questionable and didn't please the console's core audience.

That was still before 2010 though. Wii peaked in Japan during it's first full year, where (including launch sales) it got over 40% of it's total sales from the country, and sales fell off more every year from there. Second year was still good, but it crashed down in it's third year in Japan in a similar way it did in the rest of the word 2 years later.

There were a variety of factors. Here is one that no one has mentioned yet: Wii Sports was not bundled with the hardware in Japan. NoA decided to bundle it in. (I think it was bundled in Europe too.) That plus the other factors mentioned meant Wii was not as popular in Japan as it was in the rest of the world.

And only 1 million until it's above the Xbox 1. Blows my mind. Great system.