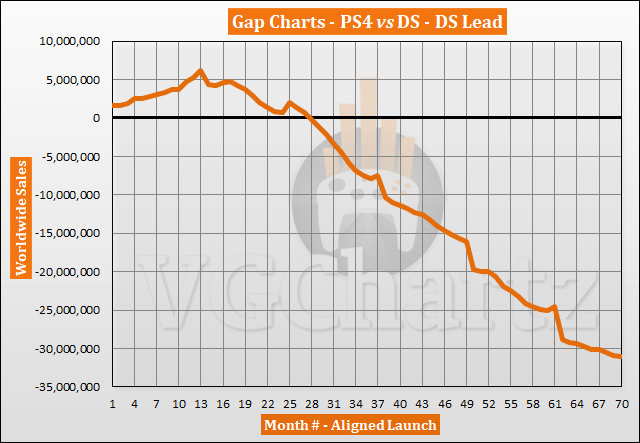 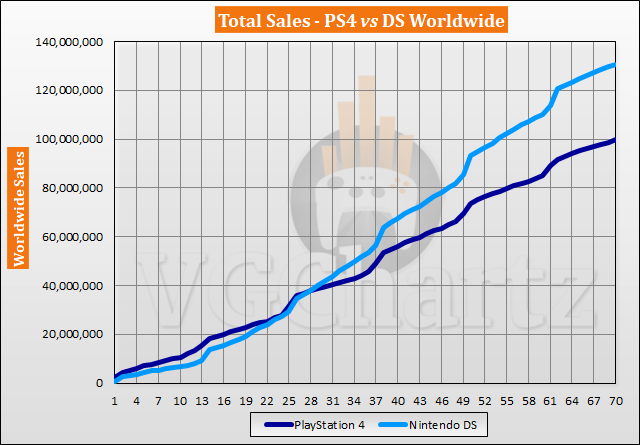 a bridge to far.

Unless the PS4 reaches 99$ at some point in its life, PS2-DS numbers are going to be too much for it. Considering the PS5 is rather close, PS3 will peak around the 130m.

So, early in it's third year the DS took the lead. What impresses me though, is that even now, after nearly six years, the DS still has the stronger momentum. Usually it is said that Nintendo consoles peak early and Sony consoles have a long tail. Seems not the case here.

why ? sony always have long legs.. except PS3 :D .. but PS4 is still selling very well and will continue to do it, and yes DS also had long legs, but it is the only console maybe from nintendo that had long legs .. 3DS also maybe but .. it selling less in these legs ( this year and last year ) than the legs of other consoles.
Anyway I expect with this holiday season to begin the PS4 uphill chart here .. through the end of its life cycle because the DS sales after this year are just very bad .. 8M then 3M then under 1M the last year .. PS4 will beat that with much .. even after PS5 launch

DS is still running away at this point. There’s no chance.

DS will sell 24M units until its end of life, PS4 should sell about the same. The gap is expected to flatten out in future months and not to shrink in favour of PS4.