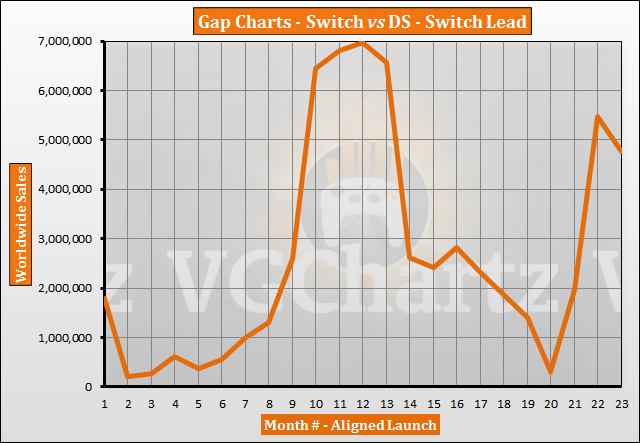 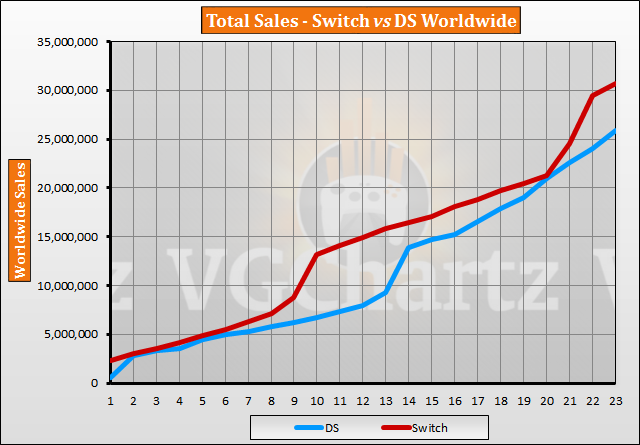 January 2019 is the 22nd month that the Nintendo Switch has been available for. During the latest month the gap grew in favor of the DS 721,978 units when compared to the Switch during the same timeframe. In the last 12 months the DS has caught up by 2.06 million units. The Switch is currently ahead of the DS by 4.76 million units.

Interesting. I didn't know the Switch was ahead of the DS for 100% of the time so far. It's going to be close this year, especially in a couple of months when DS gets it's corresponding holidays. Most likely the DS will barely pull ahead until the Switch holidays.

Punctual to the japanese release of the DS Lite the momentum turned hard in favor of the DS. Month 20 should be worldwide release, which is kinda overwritten here by the different holiday seasons and Switch getting into one. But just look how different the curve of the lead looks for the last holiday season and the one before. First time Switch had the better momentum on it's side, now directly after the holidays for Switch the lead is already dwindling again. And we haven't reached the next holidays for DS. No way Switch stays ahead, and as I don't expect 150M for Switch the DS will probably keep the lead forever.

Month 17 for Japan and month 20 for everywhere else I think?

Month 17 for Japan and month 20 for everywhere else I think?