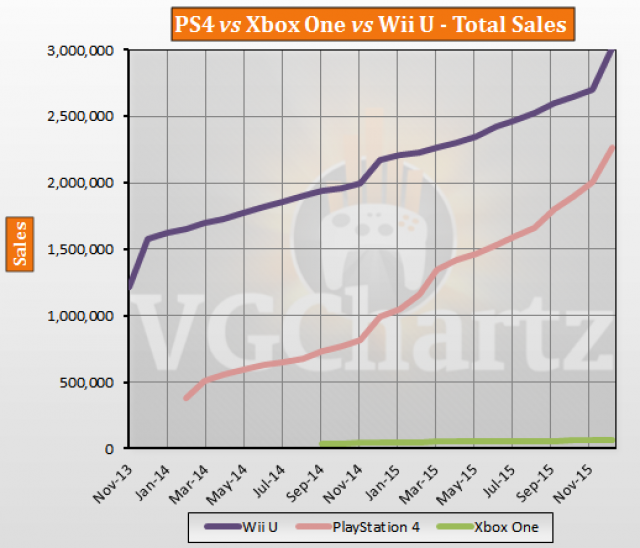 Looking at the total sales of the PlayStation 4, Xbox One and Wii U in in Japan for December shows how the gap has slowly shrunk between the PlayStation 4 and Wii U. The PlayStation 4 has outsold the Wii U most months since it launched. However, the gap grew in December. The Xbox One is almost non-existent in the land of the rising sun.

The Wii U crossed the three million mark. The Wii U has sold 3.02 million units lifetime, the PlayStation 2.26 million units, and the Xbox One 64,543 units.

Taking a look at the marketshare, the Wii U tops the other two platforms combined. The Wii U has a 57 percent market share, the PlayStation 4 sits at 42 percent, and the Xbox One just one percent. 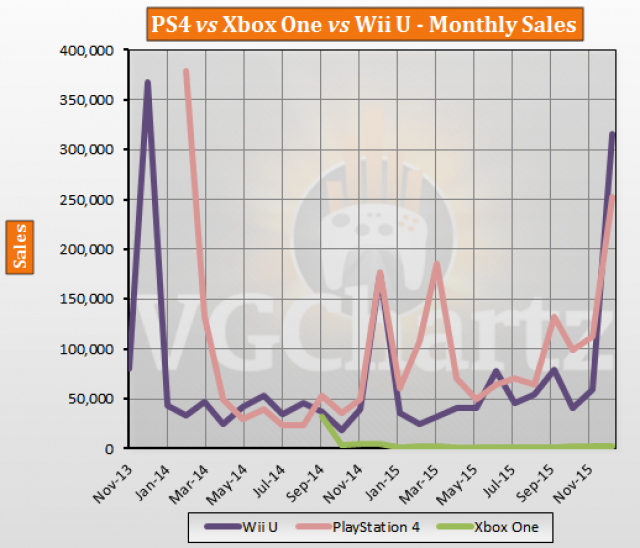 Looking at market share for the month of December, the Wii U managed to achieve 55 percent. The PlayStation 4 accounted for 44 percent of the consoles sold, and the Xbox One just one percent.

Poor Xbox One. Putting it on that chart is just like abuse :(

Yes, i saw on a official post, that Xbox One, just sold 95 units last week on japan.

It's going to be a long slow road for PS4 to catch Wii U I think. I doubt it will overtake Wii U before NX comes out.

Eh, with all the JRPGs coming out this year, and Japan slowly giving up support of the PS3, I think it'll catch up to the WiiU eventually.

Depends greatly on the release of Kingdom Hearts 3 and Final Fantasy XV I guess. The gap is closing the release of those games will surely have a nice effect on PS4 sales. But I don´t think Sony cares all that much about Japan anymore. They are a company and they want to make a profit by selling as much PS4´s as possible so they focus more and more on Europe as home market. Good thing for us they also localize there JRPG´s over here, since we do like them.

Im so happy that PS4/Wii U did much better than Dec 2014. There is hope for console in Japan. PS4 will definately did better this year.

i think that Japan, have other sales event in January, and February, like a 2th Holidays, Japan, still after USA, is the place that most spend on console Market, i think that Germany, is the closest market to japan and it spend 4 Billions of US$, per year with Mobile, Console, and PC Gaming, Japan's console market still worthing 3.6 Billions of US$ OR +.

Wait nevermind, that's only for the gap charts thing :-P