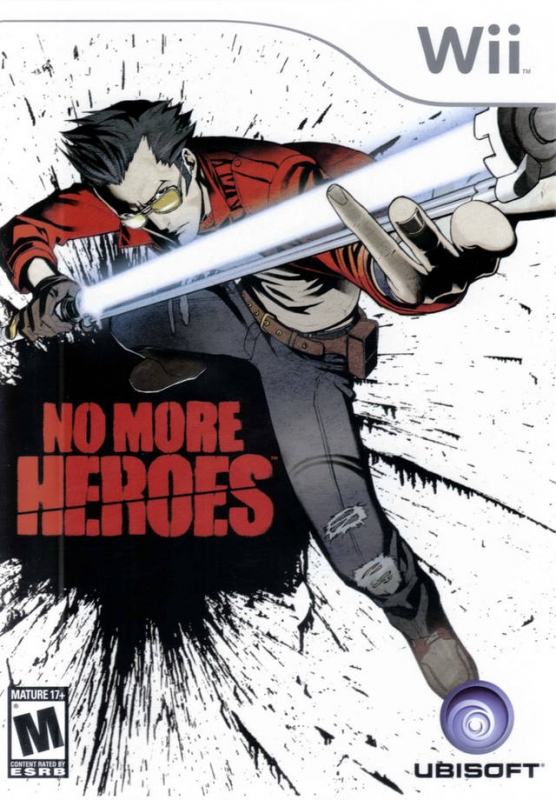 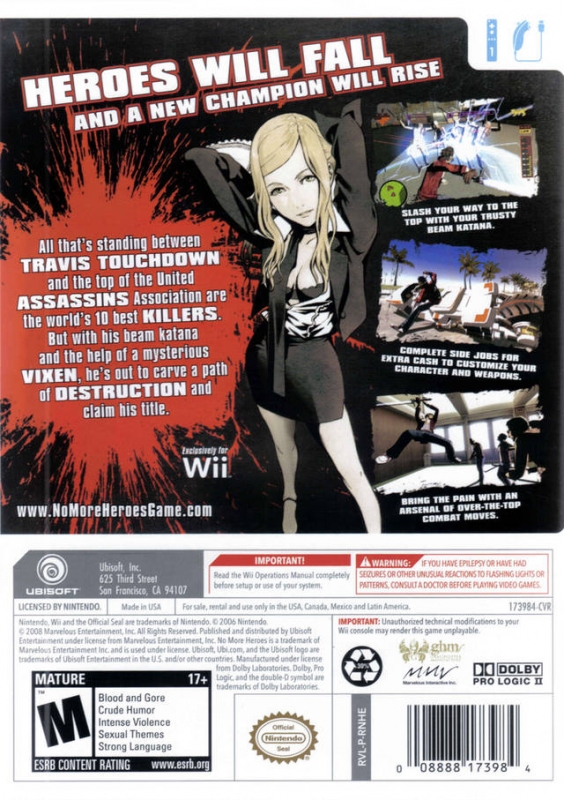 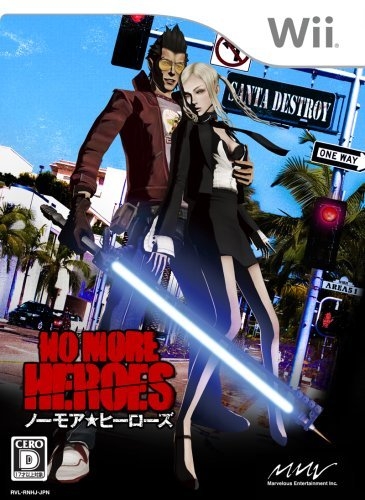 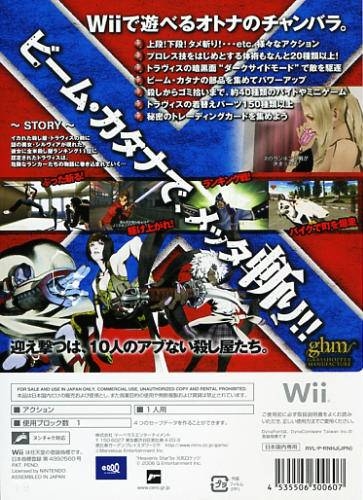 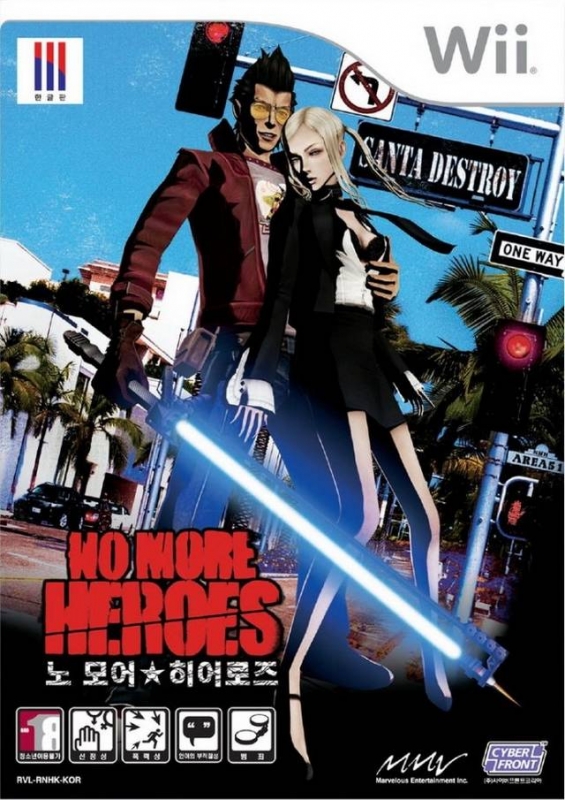 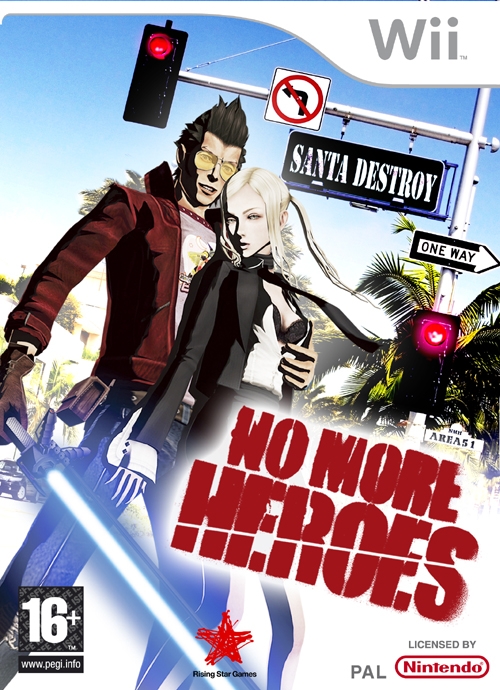 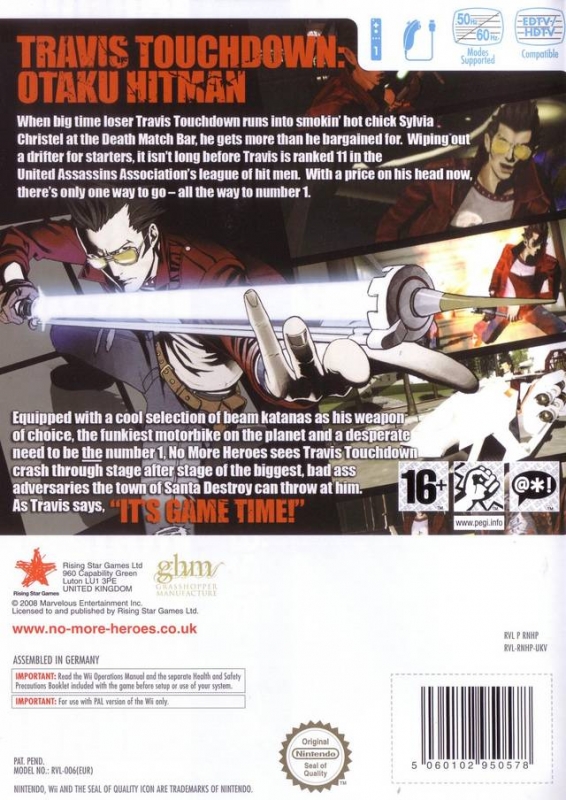 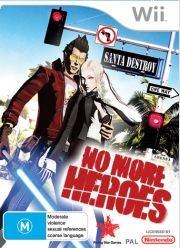 How about just one more hero?

No More Heroes is a game made by famed video game developer Suda 51, who is known for making cult classic games that recieve considerable critical praise, but low sales. Considering most of his earlier games were much appreciated, one would expect No More Heroes to follow in the footsteps of Suda's earlier games. And with the name of the game's main character being Travis Touchdown, could anything possibly go wrong?

The game takes place in the fictional town of Santa Destroy, California. Enter Travis Touchdown, a geek of wrestling and anime(a so-called otaku) who lives in poverty, staying at the No More Heroes motel. After meeting a sexy woman named Sylvia Christel, he decides to pick up a beam katana he recently won off of an internet auction and become the world's #1 assassin - Driven by the promise that, if he does so, he'll get to have intercourse with Sylvia. The game opens as Travis kills Helter Skelter, the #11 assassin, and thus he himself advances to said rank. Which means, for the player, there are 10 assassin battles, a.k.a. boss fights, to go!

The gameplay has two very different parts. The main focus would be the actual stages leading up to boss battles, where you will meet lots of random goons and have to beat them down with your beam katana by repeatedly pressing the A button. Swinging the wiimote is only used for finishing moves. Besides regular slashing finishing moves, you can finish off enemies with wrestling moves, which you learn by gathering hidden wrestling masks. The boss battles are quirky and interesting for the most part, including a superhero-wannabe called Destroyman, a teenaged samurai-girl by the name of Shinobu, and the revolver-wielding texan Dr. Peace. Boss battles always take place in spectacular fashions, and you'll have to count on your wits to guide you through them. Throw compassion to the wind, though, because some bosses will try and trick you to be a nice guy only to smack you down when you try to help them.

The other part of the gameplay takes place between assassination missions. See, for every assassination mission you have to pay an entry fee. To get said entry fee you need to do jobs. These jobs consist of things like mowing lawns, cleaning up trash, finding lost cats and clearing the desert area of scorpions.

Graphically, No More Heroes is no technical marvel, but it's no slouch either. It has it's own distinct style to blend with it's cel-shaded graphics, and technically there were, atleast in my playthrough, no framerate issues or slowdown during the game. The voices in the games are provided by several veteran voice actors such as Robin Atkin Downes, who plays Travis. The music is composed by Masafumi Takada, previously known for the soundtracks to killer7 and Resident Evil: The Umbrella Chronicles.

No More Heroes mixes gameplay that keeps itself fresh with quirky dialogue and a downright trippy storyline. The game is filled with laughs, both from the character interaction, the strange ideas the game creator's have managed to put in it, and also, just purely from playing the game. No More Heroes is a gem that shouldn't be missed.

Story: It's hard not to get pulled into it all when they decide to bombard you with ridiculous plot twists from nowhere, and though the story won't be winning any awards, it succeeds in keeping things interesting.

Gameplay: Top-notch. There's something special about alternating between odd-jobs during the day and ruthlessly slaughtering hundreds of thugs during the night. The gameplay variations blend together well, and the combat system holds up great. Also, clocking in at about 10-12 hours, the game doesn't overstay it's welcome.

Graphics: No More Heroes looks good. It's hardly the best-looking game on the Wii, but it's a good-looking game.

Sound: The music mixes a retro feel with modern tunes, and the voice acting is really good.

Fun Factor: If you can play No More Heroes for more than 10 minutes and not crack a smile atleast once, you're a lot more mature than I am. If you're anything like me, you'll be getting a very high amount of fun from this game - Count on it.