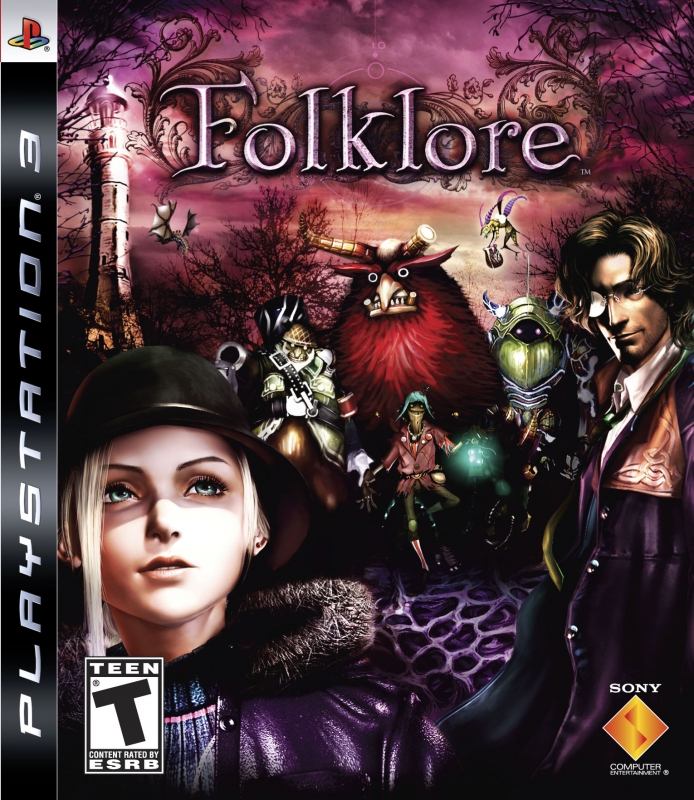 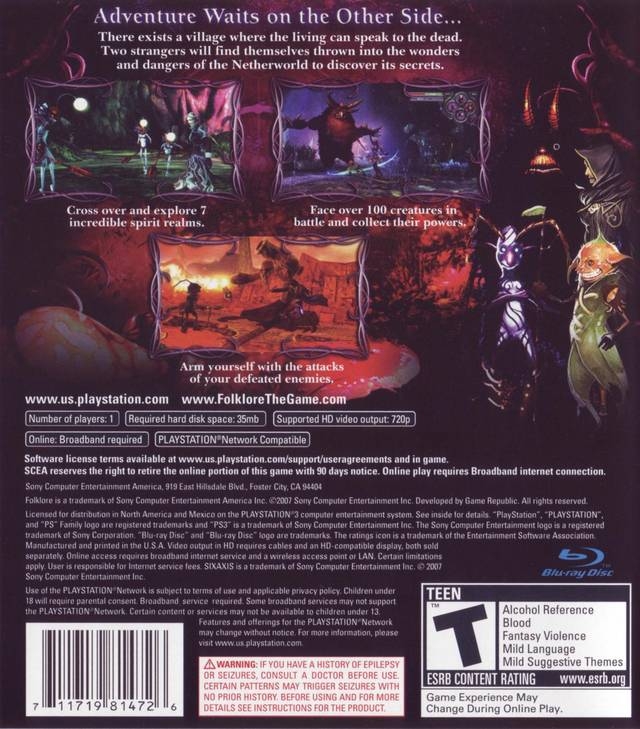 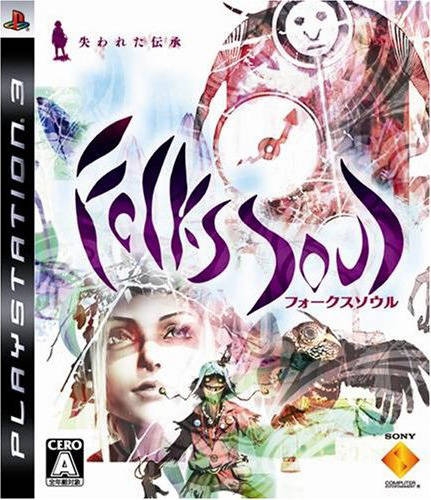 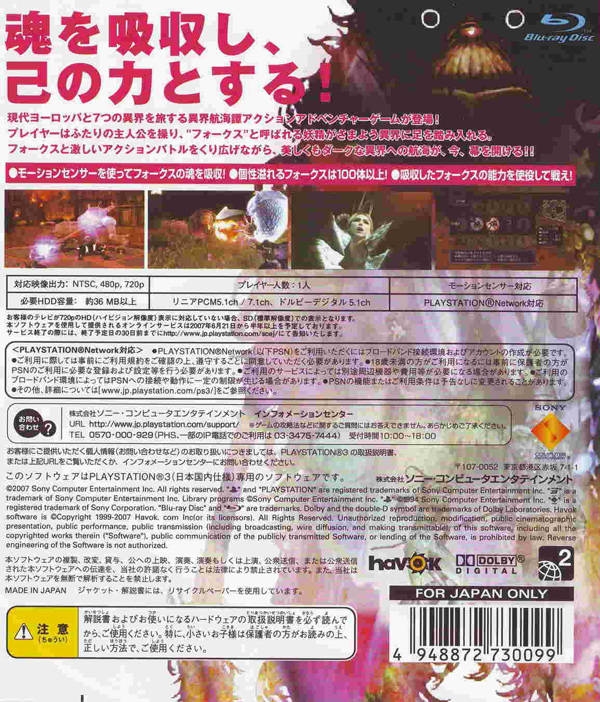 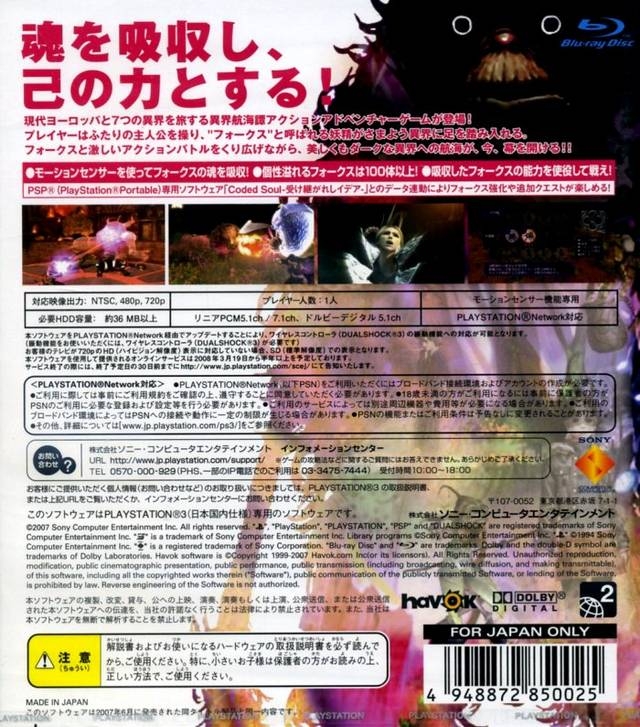 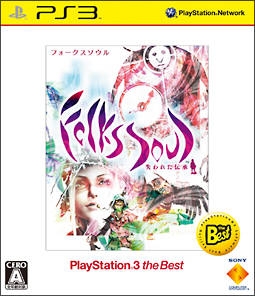 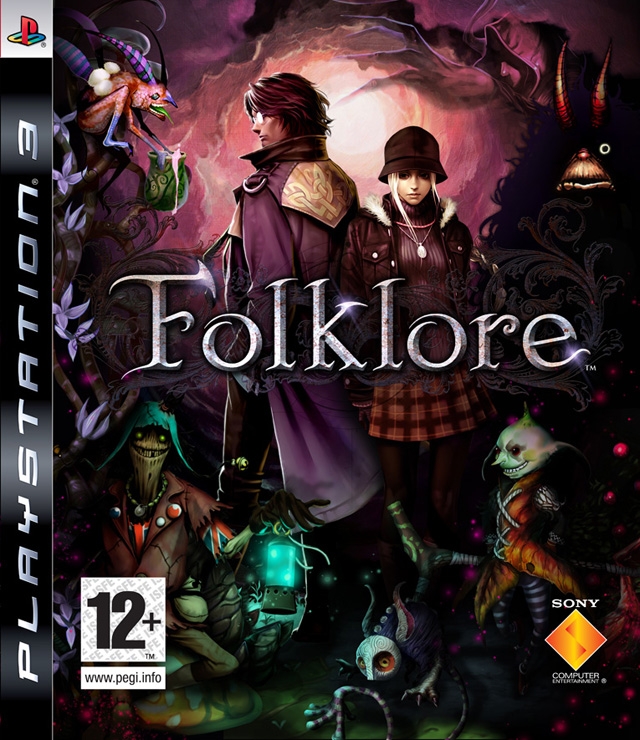 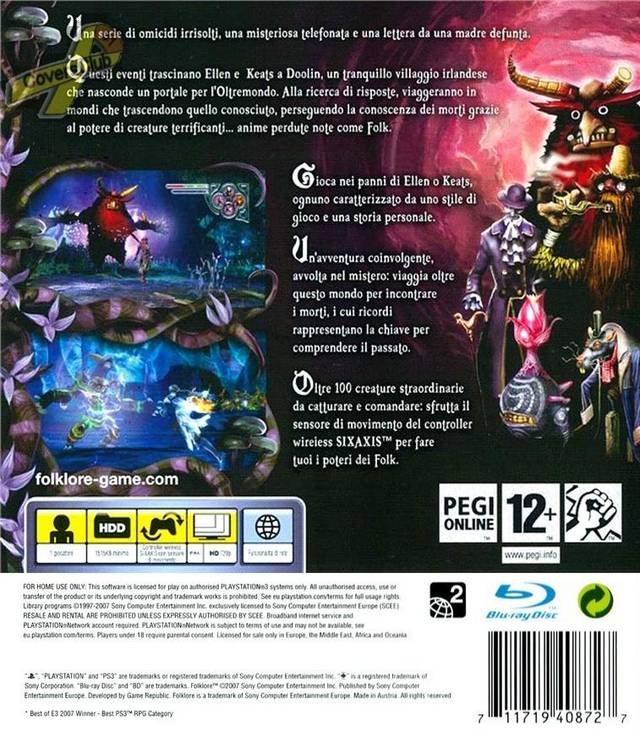 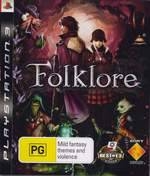 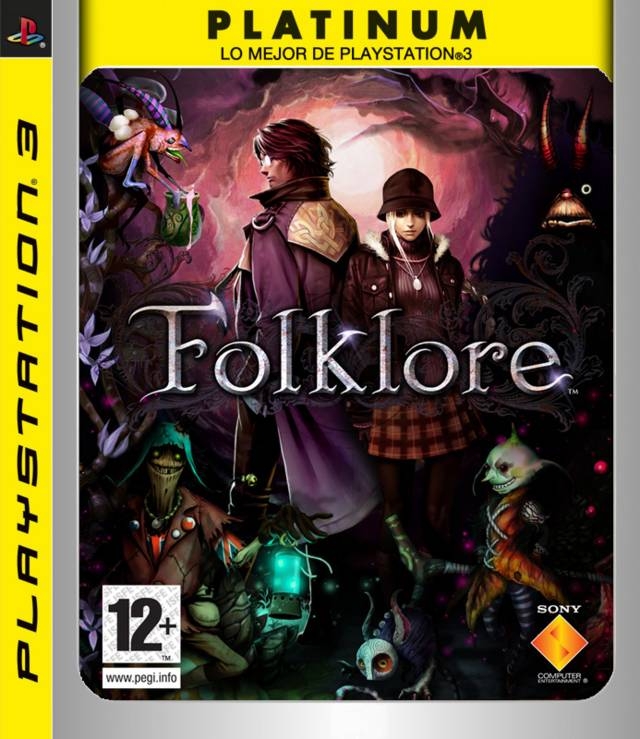 The PlayStation 3's first True JRPG Exclusive... But was it good?

Folklore... it is one of PS3's most Overlooked games ever made...

The game takes place in present day. A young university student by the name of Ellen is lured to the sea-side village of Doolin, in Ireland, led by a letter from her supposedly dead mother, telling her to meet her at the Cliff of Sidhe, Doolin.

BUT at the same time... Keats, a journalist from an occult magazine called Unknown Realms, receives a telephone call from a woman in need of help telling him to come to Doolin ASAP, and going on about Faerys who would kill her if know one comes to her aid...

He then laughs abit but at the same time suspects it is a prank call, he then grabs his coat to take a visit to Doolin Village. When Ellen arrives at the Cliff (BEFORE KEATS DOES) of Sidhe, she sees a cloaked person sitting at the edge in an odd way...

Thinking it is her mother, she calls out to the person, but it/she does not reply. Keats arrives on the scene then shortly after Ellen, and asks Ellen if she was the one who called him she then replys no in a scared way...

As she says that word... he wonders aloud if the person at the cliff was the one who called him and then tries to approach her... And then out of Know-where strong gust of wind suddenly blows across the cliff, and when it sub-sides, the person has disappeared, gone without a trace.

Ellen, scared and losing it, runs down to the beach to find the body and then meets a tom-boy-like girl from the village named Suzette.

She then questions Ellen, but she is so distressed and freaked out that she faints.... Out-Cold...

Keats arrives and, after questioning Suzette about Ellen and what the hell just happend... , decides that the best thing would be to bring Ellen back TO the village.... (Right smart move...)

And Keats to a base on the edge of the village where he sets up his Gear... (Save Point, Scrap book, Items, Etc...)

That night, they are both visited by strange voices who invite them to the village pub, where they meet beings they had never before thought existed, and are taken to a place that surpasses all imagination: the Netherworld!!!

Soon Keats and Ellen find themselves in a 17-year-old murder mystery, where the answers seem to only be found in the Netherworld, the land that can only be accessed from one place in the world, Doolin.

To solve the crime and reveal Ellen's forgotten past, they will need to venture to the Netherworld as travelers, where Faerys and Folks alike await them.

Along the way they meet a variety of different characters, like Scarecrow and Belgae, who help out both of them in their quest.

Throughout the game, players learn about the chaos the Netherworld was put into by a previous Netherworld traveller.

The eventual goal is to reach the core of the Netherworld and "fix" it.

The game takes two different perspectives in the story that shows the different views and opinions of many different characters.

While traveling in the Netherworld, many mysterious murders start to occur in the village of Doolin after the appearance of "The Hag."

The people murdered are the only ones who knew the truth (or part of the truth) of Ellen's past.

There are seven unique realms, each farther from the Earth than the one before them.

Ellen and Keats journey each realm separately. Each realm represents a certain aspect of human thoughts of death and desires for an afterlife.

The Fairy Realm, for example, is the human personification of "Heaven," created from the desire of a pleasurable afterlife, while Hellrealm is the opposite, for Hell, where souls are judged and those who have sinned are punished.

Warcadia represents the fear of death that rages in mortal hearts, while the Undersea City is a once-beautiful, flourishing water realm that was believed to be where the gods resided.

The Endless Corridor was created from the belief that there is nothingness after death, and the Netherworld Core lies at the heart of the Netherworld and is home to two trees which provide a link to the living world.

Each realm has their own Folks to battle against and absorb.

In total, there are over a hundred beasts, characters, and monsters to interact with. Using the SIXAXIS wireless controller or the Dualshock 3 wireless controller, the player must battle monsters and literally "shake" them into submission and "yank" their souls (known in the game as ids) from their bodies.

The absorbed powers can then be used to capture or defeat the monsters that lie ahead.

Players can choose between playing as Keats or as Ellen; the gameplay differs depending on who is chosen.

Decisions made in one story-line will directly impact the path of the other, though this only appears later in the story.

A main difference between the characters' gameplay is that Ellen fully materializes the Folks she uses, meaning that they can be used as a defense, but if they are hit, Ellen cannot attack again until its death animation causes it to disappear.

Keats, however, only materializes either a body part or a transparent body of it, though to compensate, his folk are usually more powerful, and he doesn't have to worry about his folk being destroyed.

Another gameplay element is that Ellen's magic bar (which allows to her to use her Folk) regenerates slowly, while Keats' instantly fills after not using his abilities for a while.

Ellen also has the ability to wear different Cloaks that protect her from status Ailments, while Keats has a 'release' ability that makes all of his attacks stronger and invincible for a limited time.

The overall Value of Folklore really depends on the gamer, if you are interested in the JRPG genre and like action games aswell as a good yet dark fantasy story with "some" light humour then folklore is the game for you!

This game is sort of like the tim burton of the gaming realm this gen so far.

The "Main" story is 10 hours to 15 hours long it varies from person to person...

Of course there is ALOT of DLC from PSN such as more Folks to use, more levels, more gear, more items, and more combos and even side stories that take part in the main story as side quests that matter.

Each with about 3 hours of play time each.

There are also 3 FREE DLC for the game which includes a users created Folk that is a Nature type who deals Quake damage for Keats and Wind Damage for Ellen.

With that said, there is an Online "Maze-Like" mode of which you the gamer can alter and create in your own vison with limitions of course, but the more you play the more gear and folks you get to add to you own dungeon.

You also have the choice to play OTHER users dungeons to gain more EXP and More folks aswell as WW rankings for the pridful gamer.

Now time for the Pros and the Cons...

I. Knowing it was the PS3's true and first Action JRPG exclusive gives you a good feeling if your into the genre.

II. It has a Fantasy Based theme, very story-book like to say the least that has a dark charm to it, almost like its from a novel or something.

III. Action-Style gameplay with a decent amount of RPG elements to "officially" deem it as an Action JRPG game.

IV. Switching between two characters gives you insight view between two sides of the story as it unfolds.

V. Each character has over 100 Folks to choose from, which leads to many, MANY possible combos and strategies during combat.

I. Cut-scenes may become very annoying at times, they are skippable but only to a certain degree which i found to be like i said "annoying" it has abit to much story to it with little to show for after beating the game once.

II. Combat will get hard at times, you have to find out the way certain folks and foes fight in order to prevail, you cant just go into battle folks swinging and think you'll win, this isn't a bad thing, but some people just like Hack n' Slash type games, its here but not fully.

III. A certain graphics glitch can become an issue, it sort of ruins the whole visual aspect if you notice it to early in the game, it almost makes the game look ugly.

IV. After all DLC it bought and once your done with the story, theres nothing really left to do.

V. Keats can feel like a cheap character at times, where he becomes Invincible to be honest, he also has some unreal and powerful folks, and if, when used right, to be spammed it really takes certain aspects of the game out due to his overpowerd folks, of which he has more then a few.

Overall Folklore IS the game that Never was... Unlike the other overlooked PS3 exclusive JRPG Valkyria Chronicles, Folklore will never see another sequel on the PS3.

It's a Great game and should be with any PS3 gamers JRPG collection.