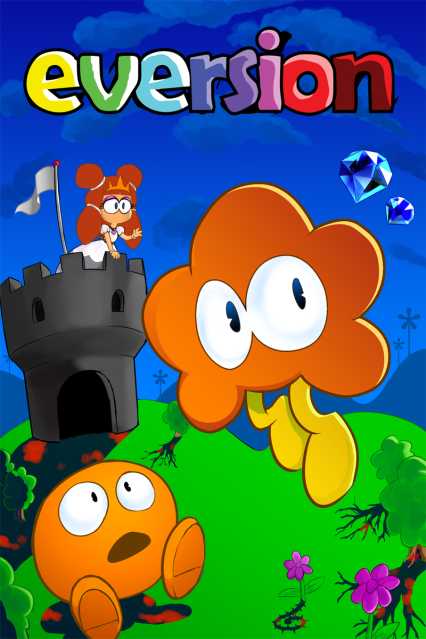 Sounds may come from other realities, but this one sounds too familiar

Presentation - 5.0
Gameplay - 6.5
Value - 4.0
Eversion is a 2D platformer made by Zaratustra Productions in 2006. While this game has garneded a bit of a cult following since its launch, its limitations are too big to overcome.

Subverting genre styles and expectations is always a difficult thing. For one, it requires a very deep knowledge of whatever you want to work with, while at the same time not making it look too forced to not work as its own thing. I’m sure you’ve experienced many times already. Being playing a game with a particular tone, but leaving just enough clues to tell you that something isn’t right. And when the game takes the turn it’s been building up towards, rather than shock or surprise, you feel indifference. Not because the twist and turn was bad, because you saw it from a mile away, and no matter how good the twist is, the feeling of anticipation has a limit on how much it can be stretch before giving up. That kind of feeling accompanied me throughout my play through of Eversion.

Eversion is a 2D platformer game made by Zaratustra Productions in 2008. The original version was freeware, but apparently that build is not available anymore. The version I’ve played is the HD version from Steam, released in 2010, which apparently includes more stuff, but because I haven’t played the original, this review will only factor in the Steam version.

The plot of the game is as simple as many Mario homages are: The princess of the Flower Kingdom has been kidnapped by the evil Ghuulibas, and now the brave flower Zee Tee must rescue her, travelling through the land in order to do so. There are seven levels of the game (eight with the secret one), and in each one you’ll have to traverse the land, with a landscape similar to that of the Mushroom Kingdom: green fields, pretty flowers, some blob-like enemies you jump on to defeat... But the game is more that it meets the eye, because this game is a puzzle game. In order to obtain all gems and secret letters, you have to find special portals to reach alternative versions of the map. The versions interact with one another so that you may keep advancing throughout the stage, “everting” the stages to reach your destination. These portals are invisible, and are only noticeable when you get close to them. Once you’re close, the music and the color of the map will change slightly to another tune and tone. And this is where we start our descent into “madness”…

The thing is, this game will start morphing every time you go through a portal. Every new world will look less and less happy and alive: the goomba-like enemies stop smiling, the plants wither and die, the sky becomes a darker shade… And soon enough you’ll find your typical stuff from nightmare-esque games. The goombas suddenly have evil greens and can revive from being stomped, evil looking hands will pop up from the water, walls of blood will start chasing you… The whole thing. If you’ve played any game with a spooky or a creepypasta feeling, you’ll probably know what’s to come. Thankfully there’s no loud and screeching scream for quick jump scares, something I really appreciate. The seventh level looks strikingly different from the style of the first. And once you beat the game… well, you can imagine. No, really. After finishing the game, the first thing that will come to your mind is what will happen. It’s not bad, it’s just… predictable, which is the main problem of this game.

See, the game is based on a line of H. P. Lovecraft, that says that “sounds –possibly musical- heard in the night from other worlds or realms of being”, which is where the use of different sound tracks to spot the eversion points. It’s nice and all, but the problem is right there: if you start your happy go lucky Mario-like platformer with a Lovecraft quote and a warning for children and people with sensible dispositions, obviously something’s up. And once the changes begin, the player is going to immediately notice and guess everything. The warning literally spoils the whole game. And in a way, it’s inevitable. If you have the warning, the players will notice the game, but they are going to know what to expect from the get go. And if you don’t add the warning, not only you’re liable for whatever damage little children and sensible people get while playing this, the innocent cutesy look will probably make this game lose itself in the sea of Mario clones. There is no real perfect solution. It reminds me of Doki Doki Literature Club in a way. If the game looked like just a generic anime visual novel all the way until the twist, it would have hit me way harder than it did, but because it had a warning for disturbing content at the very beginning, I was on guard from the start. And the scene in DDLC is done admirably well, don’t give me wrong, and it still had an impact during my playthrough. It’s just… not as good as if I had gone in blind. The same for this, only the execution in Eversion is not nearly as good as the one in DDLC.

Spooky stuff aside, how’s the platforming? It’s… allright. Nothing revolutionary, you jump from platform to platform, you jump on enemies to propel yourself higher, you have to deal with inertia and have control of the character during mid jump… If you’ve played any platformer, you know how it plays. The level design is decent, and quite challenging in some areas. The game has infinite lives, so you won’t have any problems from dying over and over again. Though be aware, there are some points where you can get stuck, unable to die and restart from your last checkpoint. This happened to me during the secret eight level of the game, and it was quite frustrating starting over from the beginning. I’ve read that apparently you can kill your character pressing pause and the eversion button, but it did nothing for me, so…

Also, if you can, reach the secret ending of the game. It’s a very cute ending, and considering how short the game is, it’s probably worth it. Overall it took me around 2 hours to beat the game, and I’m not particularly good with platformers.

Eversion is a nice experiment made from a place of love, which I cannot deny. Hell, the game was free when it first came out. But the problem is that the game inevitably spoils itself too soon, and the punch line is not nearly good enough to pull it through. Maybe if I had gone in blind it would’ve worked better, but I guess you need to warn people about the scary stuff. Overall, a decent platformer, just not a particularly scary one.