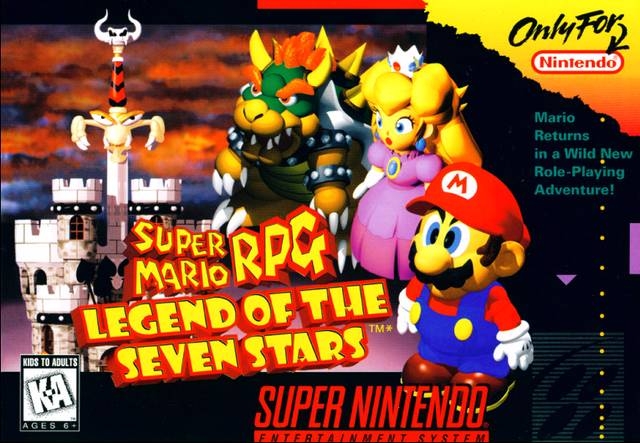 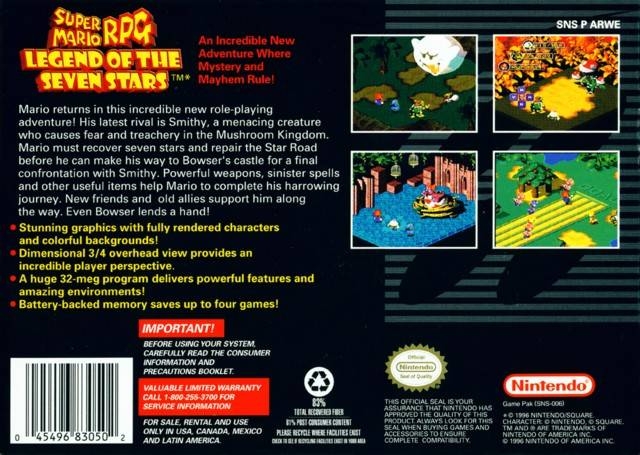 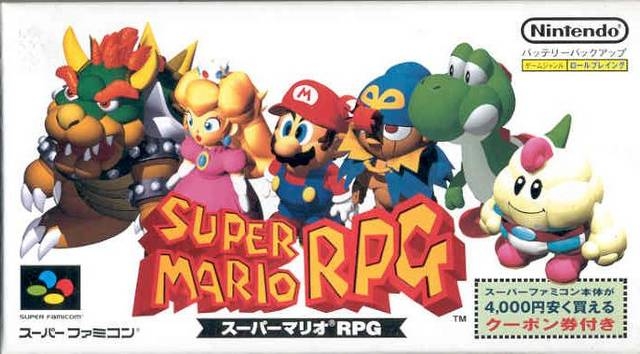 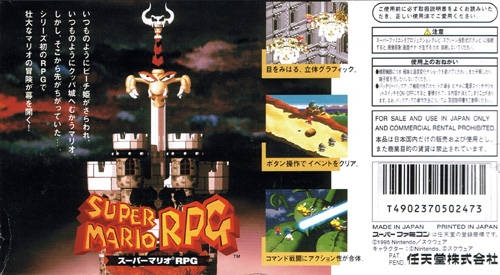 Square-Enix needs to get their hands on Mario RPG making again.

Presentation - 10
Gameplay - 9.5
Value - 9.0
If it's even half as great at this game, it's another masterpiece. You get a skillfully blending of simplified RPG and platforming, with a great story that never takes itself too seriously.

All I have to say in introduction is in the headers, so let's get down to this.

All the complications, twists, and extranueous characters you'd explect in an RPG, but... most of them are mushroom people, or cloud people, or moles, or frogs. And they don't take themselved too seriously. This actually makes the few dramatic moments work, since you aren't saturated with them.

Oh, and what's the story? Bowser kidnaps Peach again (don't care if she's called Toadstool in the US release; "Peach" is a cuter name), and he has her tied up, instead of locked in a room. Can we say "Fetish Fuel", you fans of TV Tropes?

Anyway, Mario is about to rescue her, but then the real villain cuts into the rescue, and it's off to save the world. It's just done so well and so whimsically. It's one of the few RPGs I don't mind going through the story again, even just to watch all the silly reactions. 10

It continues the style of Donkey Kong Country, which is to make 3D models of everything, shrink them down to a size that fits on the system, and display them as sprites. It works great, and the art direction is just as great.

Music is also memorable, from the beginning to the end. Not perfect, but damn close. 9.5

So many associate "simplified" with bad. I say that's bull (I sucked at RPGs until Mystic Quest showed me how to play them), and in the case of this game, it keeps either the RPG elements or the platforming elements from being too dominant at the expense of the other. Both blend seamlessly.

If only the character balance were better. Bowser is a fun character, but Geno is just as strong, has better magic, and is the fastest character, while Bowser is the slowest. And Mallow is supposed to be half healer half magic user, but when Peach gets her stronger weapons and spells, she's another indespensible character. Ensuring you had reason to mix them up would have worked in the game's favor.

But that's only a minor quibble. The gamplay is a beautiful balancing act otherwise. 9

Copies of the SNES original can run from $20-$60, although I argue the game is still worth it. But if you have access to the Wii virtual console, it's available in all regions, and sure as hell is worth the 800 Wii points. 9.5

As an RPG, it's not as good as Chrono Trigger or the Final Fantasy games. As an overall game, it's just as great, and one of my favorite ever. 10