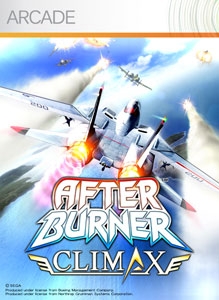 The After Burner series flies out of the grave, restored with HD visuals, and online leaderboards. The on-rails flight simulator has flown through years of history, through arcades, and it has now come to PSN and XBLA. Ever want to take a jet and dodge an onslaught of missiles by completing a perfect 360 degree barrel roll? Well wait no more, Sega’s very own After Burner Climax is here and it looks damn sweet.

If you are a fan of the original After Burner games, then the menus and sound will feel right at home. After Burner Climax achieves the presentation that is found in the arcades. The menus are nothing to brag about, but it surely feels like an arcade.  Arcade mode is a straight up 14 levels of action, and the Score Attack mode will only add up total scores of each level to upload to the leaderboards. Each level has its own personality, and each one is looks stunning.

Now, I am not talking about the best graphics stunning. However, there is no doubt that After Burner Climax looks amazing for a downloadable title. Missile and enemy ship explosion run like clockwork, yet look very similar to the older After Burner games. On the flip side, the sound takes me a back a few years. Furthermore, the story is nothing to write home about. A nuclear bomb is to be activated in 24 hours, and it must be stopped. Of course, it’s not the only arcade game to have a nonexistent story. Yearning fans of the sound can easily adapt to the After Burner Climax soundtrack. It is however, a very tacky one. I tired of the in game soundtrack soon after my first full run through the arcade. That first run however, was a long one.

Climax mode is never fun...for them.

After Burner Climax takes practice to perfect, it is not an easy 1-2-3 arcade game. Rather, it’s the arcade game that eats a child’s quarters at the laundry mat. After Burner Climax puts the player in an on-rails jet and has them control that jet to shoot down enemy jets for a high score. Moving the jet from left to right and boosting speed is easy enough, but dodging incoming missiles and shooting down incoming jets can get tricky.

Bullets are infinite and great for short-range, while missiles do most of the effort once locked on to enemy jets. Dodging enemy missiles, terrain, and laser can get a bit complicated while trying to obliterate up to 10 enemies and that is where Climax mode comes in. Climax mode slows down the action, and enlarges aiming area to auto target and shoots all enemies on screen. It is limited to the climax bar, which fills up over time. Enemy locations all depend on level and it can get repetitive.  It’s thrilling the first few runs, but does get dull. 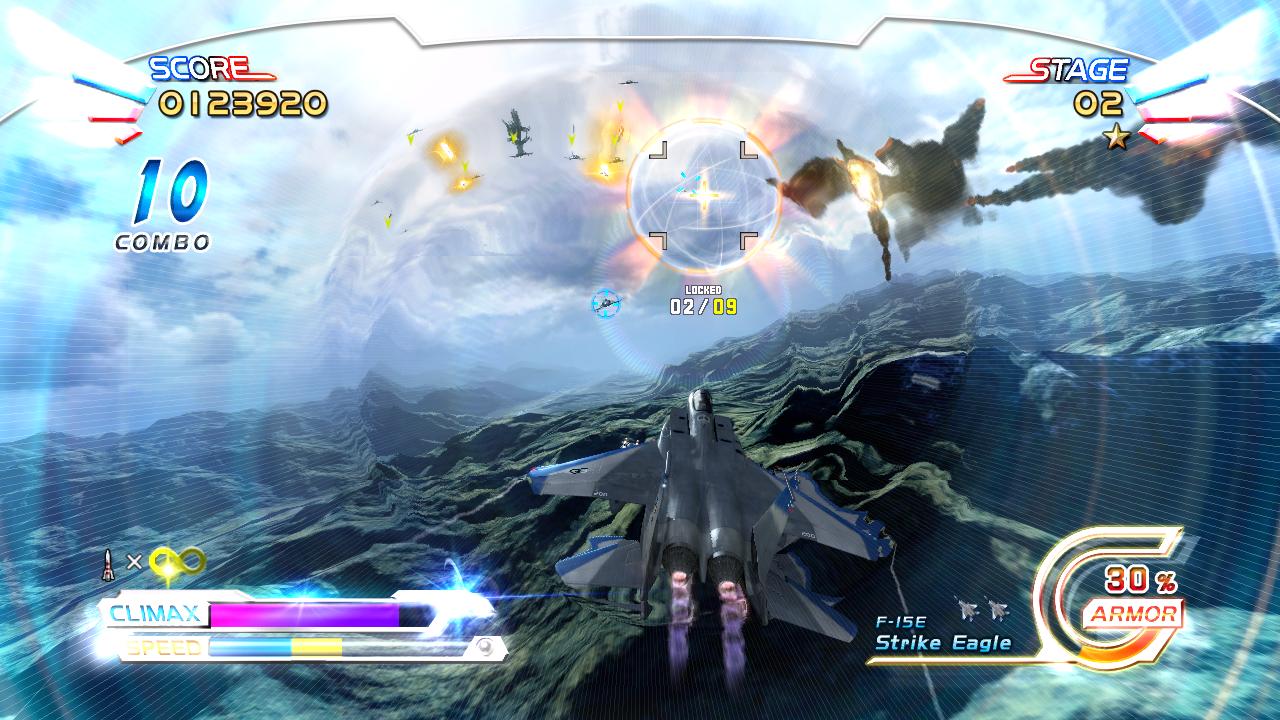 ouch, that's got to hurt.

Moreover, the repetitive levels do not help the hour count the downloadable game gives. Completing the arcade with all three available jets won’t take more than an hour, after practice has been perfected of course. The game does have a set of achievement, which unlock EX options. These are basically cheats to make life easier or harder in the game. They vary from higher defense to auto-missile targeting. It is still not enough reason to re-play the levels too long after actually unlocking the Ex options.

After Burner Climax appeals to the gamer that wants an arcade style on a console. The leaderboards can be filled with scores, and the game plays the part of an arcade game. It’s a game that can be compared to candy, short the sweet. If you’re into setting high scores, I recommend a purchase, but if you’re not into that kind of thing, you might not want to consider buying it.