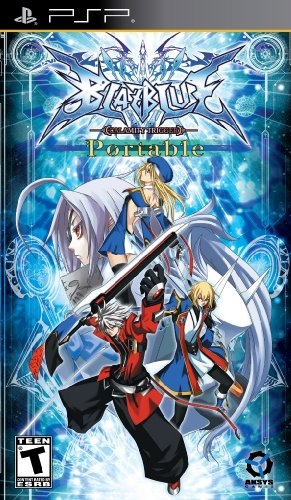 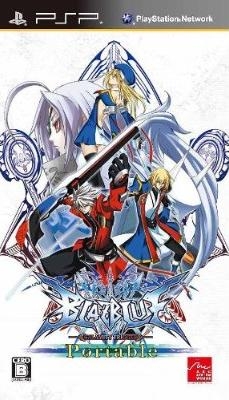 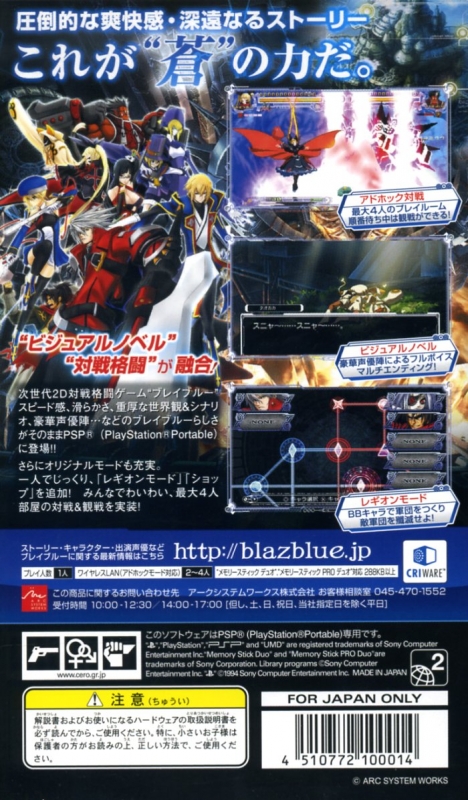 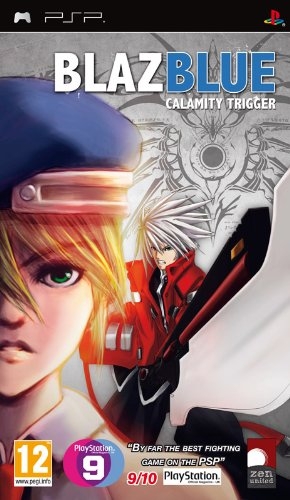 Last year, Blazblue: Calamity Trigger was a direct love letter to the fans of the Guilty Gear series from the developers at ARC System Works. The game was highly praised for its stylish visuals, above average story mode, and it’s easy to learn, yet polished gameplay. It was a fresh game that showed innovative battle mechanics with no hesitation.

Although the new IP was overshadowed by notorious sequels such as Street fighter IV, it was still vastly enjoyed by most gamers who gave the game a shot. Gamers who didn’t get a round at Blazblue’s polished gameplay, are now being given another opportunity. Blazblue: Calamity Trigger Portable is hitting up PlayStation’s own PSP system, and it packs a strong punch.

Not the average cast of characters, but they got style.

Calamity Trigger Portable is a direct port of its console counter-part. It carries over most every bit of content that was found on Blazblue of last year. With that, you get to play as your favorite character from the original cast. Oh, and trust me, a favorite character is hard not to come by. The game offers the most bizarre array characters seen on any fighter. From the Badass Ragna, to the ninja Bang Shishigami, to the uncaring and frosty Jin. Any gamer into the fighting genre will fall in love with at least one character in Blazblue, especially since each one is further presented in the story mode.

That’s the thing that most impressed me from this over the top fighting game. The story mode had me engaged in its presentation, as each character branches out with their own story. For example, picking Ragna will give you his perspective of the Blazblue universe, but picking Noel will give you a totally different look at the robust story. It will also take a while to 100% the story. To fully complete the story of each character, certain fields must be met in battle. Moreover, the characters are presented in such a manner, which is hard to come by in today’s fighting genre. The game even features voice overs, and Japanese voice track.

However, the portable installment does have a few limitations when it comes to the visuals and sound. When playing, the games action, and characters do not look as solid as its console counter-part, rather more jagged. The originally loved sound also takes a hit with poor voice effects. Now, this is to be expected, but it should be noted for those expecting the full console experience on the go. The portable Blazblue still offers amazing effects in battle, and still visually presents the colorful and charming set of characters.

not perfect, but still pretty.

There are some plus sides to the portable port however. Two new modes have been added to the portable version of Blazblue. I expected the new Legion mode to be a gimmick, but it proved itself to me. The mode entitles the player to fight opponents one by one to reach a certain point where your army can grow. It’s a challenging mode that kept my time occupied, something I did not expect to happen. The second new mode is simply a shop. The shop offers illustrations, and unlimited versions of characters (stronger versions). The currency for the shop is earned through the story mode and legion mode.

Regrettably, With two new modes, one was dropped. The portable installment lacks an online mode. Ad-hoc lessens the pain that comes from having no online mode, but it’s still a shame. Especially since there can be some serious lag when it comes to the Ad-hoc mode. It is bearable, but a refined multiplayer mode should have been included.

On the plus side, the controls seem to fit perfectly with the PSP system. The system fits well with the controls and I even prefer it to the consoles controller. Most fighters feel cluttered on the PSP system analog, but Blazblue Portable had me using the D-pad and face buttons much more than the analog which triggers special attacks.

The battle system can seem to have a never ending amount of ways to attack. Although this does depend on which character is being used, it can take a while to master. Rapid cancels, Counter Assaults, and counters took hours for me to get down right.  Most all character have a heat gauge, and much like the Street Fighter super/ultra bars, it fills up by dealing/taking damage. When the heat gauge fills ups to a certain amount, the characters “distortion drives” can be unleashed. Each distortion drive is special to each character, and fits them perfectly. For example, Jin, a character who treats other like nothing more than an irritation, gives the opponent a cold shoulder with his Frost Bite.

Blazblue: Calamity Trigger portable is simply a proper port of its console counter-part. Besides multiplayer and optimal graphics, the game offers up everything experienced on the console version, and then some. The lost multiplayer mode does leave the player lost from a decent chunk of gameplay, but plenty of entertaining hours are still to be had in its potent story mode and engaging gameplay.  I recommend fans of the series to give the game a purchase, and new comers who want a fighting game on the go, to try it out.