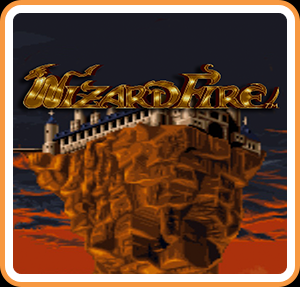 The heroes beat the villain in a fantasy world. That's pretty much it.

Presentation - 5.0
Gameplay - 2.0
Value - 2.0
Wizard Fire is an action beat'em up made by Data East and ported by FTE Games. While it tries to present a storyline, its mediocre presentation and game design makes it a sadly forgettable experience.

The value of a game has varied a lot throughout the years. From the early days of arcades to the plethora of platforms and systems today, many companies have struggled to design an appropriate business model around their software. Though nowadays we see dozens of different models and games thanks to the industry growth and the development of new technologies, back in the day things were more straightforward. The first arcade cabinets were simpler affairs: you had a game that looped endlessly and you played it until you failed, competing for the highest score. However, the more time happened, the more the concept of finishable games grew. Suddenly, people could actually play a game and reach an end, so companies had to think about matters such as the length of the level and the difficulty attached to it. The most frequent solution back in the day was making highly challenging games with a relatively short length. You’d be able to reach the end in a reasonable timespan, but it would cost you quite a lot of quarters to get there. And while this design philosophy was good at the time, the more the medium advanced the more it has aged poorly, resulting in games that would have been acceptable back then being of dubious value now. Case in point: Wizard Fire.

Wizard Fire (original title Dark Seal II) is a beat’em up game developed by Data East in 1992 and ported to the Nintendo Switch in 2018 by FTE Games as part of the “Johnny Turbo's Arcade” series. It follows a group of five heroes fighting in a fantasy land, fighting against an evil overlord wizard and his lackeys, while trying to thwart his schemes. The premise is as simple as it can get: beat all of the minions, advance to the level boss, beat it, repeat. I would say that it gets a bit repetitive, but the game is not particularly long, but more on that later. At the very least the level design disguises its linearity well enough, especially in those levels where you are indoors. Each of the five available heroes have different kinds of attacks, at least in theory (the knight uses a mace, the dwarf throws axes, the wizard spells, the bard a lance and the elf a sword), but in reality the moves are practically identical: they all have a decent range but not something that can be used across the map, and an option for attacking an area around the character. There’s a bit more button mashing with some characters due to some delay and the option of charge, but not by much. It is usually enough to deal with the mooks, but for some enemies it feels underpowered due to the range of your attacks being quite short. Especially when the enemy can do ranged attacks, lacking something to counter that is a bit annoying, but in the end is nothing that the hit and run strategy can’t deal with.  The characters also have available a magic meter, which can be used to turn the players into a varied array of different forms with different offensive effects once it fills. However, the effects of the spell vary depending on whatever page the spell book’s in, which keeps changing every couple of seconds. This has the nasty effect of risking choosing a spell you definitively don’t want, like the one that transforms you into a harmless pig, letting you wide open to attacks.

The enemies are quite generic for a fantasy-themed game. You have your bats, your zombies, skeletons, slimes, harpies, medusa heads, mummies, ratmen, wizards with fireballs… in general they only last one or two hits with a couple of exceptions, and their strategy basically boils down to charging at you. The game also includes some traps like statues that throw lightning bolts, spears that come out of holes, and other similar things. They are more annoying to deal with than the actual enemies, especially in small corridors where you have to avoid their attack pattern while mooks are chasing you down. There’s also status effects, which range from a nuisance to an almost guaranteed kill. Confusion in particular inverts your controls after getting hit, which leaves you with the choice of either stumbling through the level for a while or staying still doing the area attacks (which won’t do much, since the enemies will just keep spamming and throwing confusion at you). The bosses are quite harder, though mostly because they are damage sponges that can either move faster than you or attack you from a distance. A couple of fights are quite entertaining, like the mimic and the zombie dragon, but the golems in particular are quite annoying to deal with. They can only be hit in the head, take an eternity to kill, and have an area attack that makes you dizzy, and there are two of them at once.

The game uses an isometric point of view, which is not particularly kind or precise in the more precise instances of battle. For example, certain flying enemies are difficult to avoid because you can’t make out how far you have to be to avoid hitting them. Anything that involves three dimensional movement is in general a bit awkward, though I have to admit I’ve never liked this kind of perspective in any game, it makes the game more difficult if you don’t have a thumbstick or a joystick.

And then there’s the problem of difficulty. In general this is not a particularly hard, the enemies are not that tough, the levels are not that long and there aren’t a ton of them. And that’s the major problem with the game. It’s incredibly short. If it weren’t for the fact it was an arcade title, you could beat this game in less than half an hour. And yet you will keep dying because the difficulty doesn’t come from the level design, the bosses or the mostly comes down to the amount of enemies you have to deal with at once and the amount of lives you have. While this is not the most offensive example I’ve seen, Wizard Fire suffers a lot from that need of arcades to offer you a difficulty you feel you can easily overcome yet you keep dying and popping in quarter after quarter. You know the levels aren’t that tough, you know the levels aren’t that long, and yet you die an uncomfortable amount of times. This is especially bad in the room right before the final boss. It’s simple enough, there are floating platforms into an abyss, you jump over them to reach the boss. Easy, right? Wrong. Not only the isometrical perspective makes the jump considerably more complicated than it should, the dragon protecting the fall keeps attacking and blowing up the characters away, making most of the jumps fail. You can keep him at bay by attacking him, but if you stay still and it attacks you, you will fall anyway. The best way to do this is to use the two player option and hope that one of you reach the other side, so that the other one can just respawn alongside you. And that requires lots and lots of lives. On consoles this is not a problem, I can respawn as many times as I want. On an arcade, this requires a ton of quarters. It’s not coincidental that this jump in difficulty is just right before the final boss, you don’t just want to give up that close to the end of the game, do you? The difficulty feels very cheap this way, and added there not to improve the game, but to keep you emptying your wallet. I understand this was normal back in the day, but it doesn’t really make this difficulty age that well. And even when comparing this game to other arcade titles of its age, many were considerably meatier, with longer levels, more variety and/or a more complex gameplay. It’s not a good difficulty design, even by yesterday’s standards.

The graphics of the game are decent, but its sprite art is not anything that special. The game also has cartoon cutscenes between each level, with good old bad acting in there. They are quite charming and endearing, and give the generic characters (both the heroes and the villain) a bit of much needed personality. Sadly, it’s not that much, but at least it manages to weave a bit of a plot for the otherwise generic beat-em up.

As many arcade ports nowadays, the game comes with a lot of extra features to make the gaming experience more comfortable: from save states to different control schemes to visual options to change the style of the graphics. This are appreciated, but some are kind of pointless (other than nostalgia, why would I need to put old TV filters to my game?).

Wizard Fire feels below standards for the time. At times I’ve actually struggled to think what to say about it. I feel there’s more of a discussion about many of the flaws of the game rather than about the game itself, which it’s not a good thing. It has some good aspects, don’t give me wrong, but nothing about the game is either brilliant or horribly wrong. It’s very middle of the road, forgettable either, and that’s a shame.