Persona 4 is not a bad game. 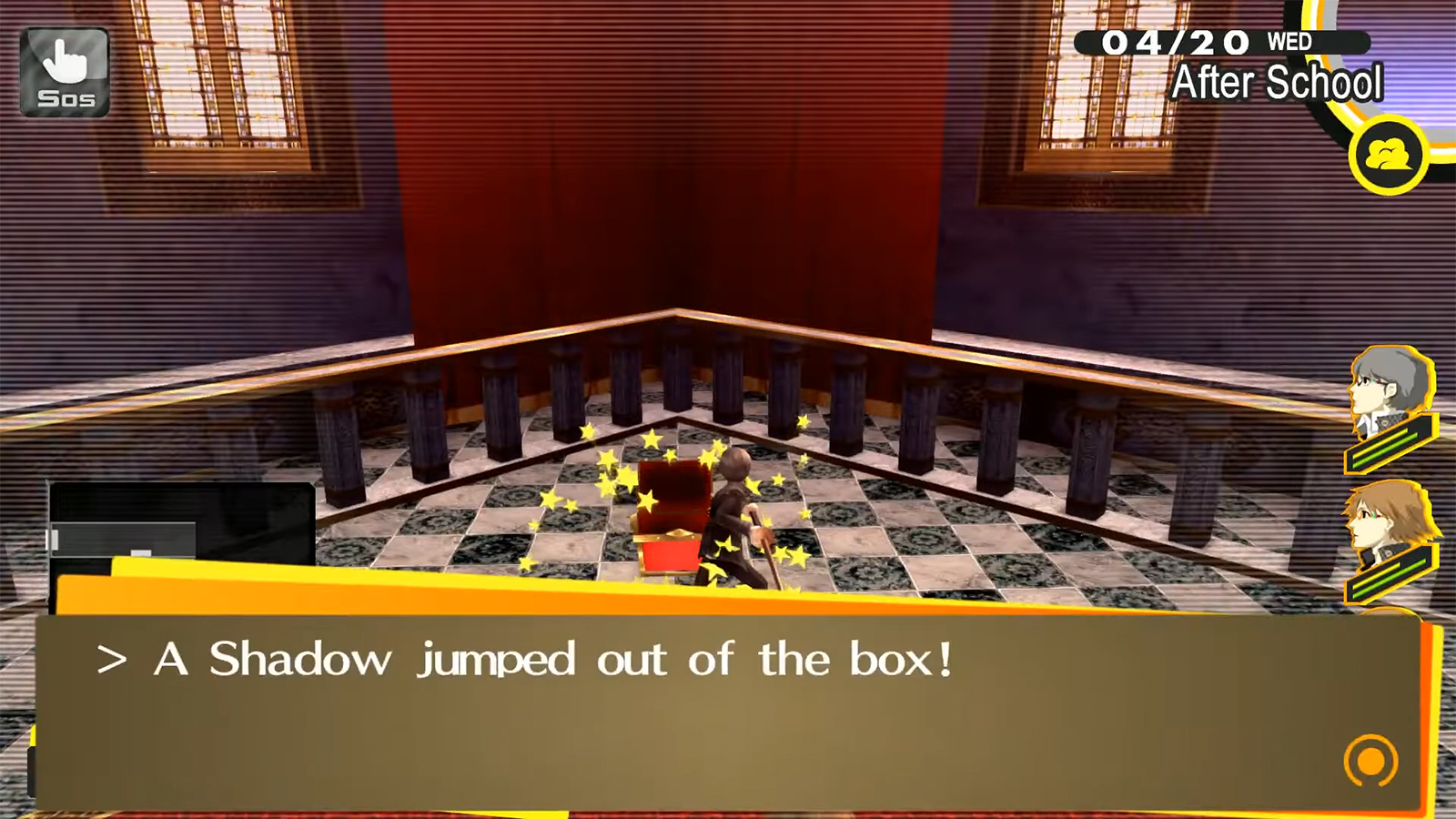 For a game that calls itself Golden, it's remarkable how often it feels entirely defined by it's cheapness. The whole experience is littered to the brim with an endless plethora of annoying gimmicks and unfair ways to throw bullshit at you for absolutely no reason. It's often deeply infuriating, and makes me wonder just how the developers decided to put all of it in there and decided it was fine. It's unreal.

Maybe people are generally more tolerant to this kind of stuff... me, personally, I didn't finish a single play session without either feeling either immediately or previously annoyed. And for a game as long as this, you bet there were a lot of play sessions.

Early on, you already find out you can't open a treasure chest without being at risk of being attacked by enemies. Then you get to the first mini-boss, and realize that you can't save before it or fast travel out of the dungeon. You either have an escape item, which you're not likely to have found out about yet, or you have to backtrack through the whole place to get out and be able to save and get better prepared for the fight ahead - or you can just try to go straight into the fight with your party lacking in SP and also being underleveled, because you didn't grind for long enough. And upon dying, you lose all of your progress. Just great.

Granted, Golden already improves on these issues a bit, by adding a few crucial options - most notably, one that allows you to get more money/experience, and one that gives you a checkpoint at every floor of a dungeon. These go a long way toward making the game tolerable, but unfortunately, this is only scratching the surface of the problems.

Things remain rather tame early on, but from the second dungeon onwards, the game asks you to do some investigating to find important information on your targets. That in itself is not a bad thing, but these "investigations" soon devolve into an insufferable exercise in walking back and forth throughout all of the game's world, talking to every last NPC until you start getting anything that barely resembles a clue. It requires insane dedication and patience, or more likely, looking it up online.

From here on, things only get worse. After a really stressful mini-boss in the third dungeon, you find a chest instead of the usual staircase to the next level - open the chest and you get attacked by Shadows, despite having just defeated a difficult boss. Then, some of the next dungeons require you to collect specific items to get through specific doors, some requiring you to backtrack through several levels of the dungeon. This would be okay if the level design was good, but these levels are procedurally generated borefests. When the story starts picking up near the end of the game, you may suddenly get thrown into a bad ending for one "incorrect" dialog choice, despite your choices never mattering at any other point in the game. This bad ending involves several minutes of cutscenes and unskippable credits, and you might find yourself getting it several times as the game gives you no indication that your choice is "wrong" in its myriad of highly ambiguous dialog options. And in some of the final dungeons, the game will suddenly disable your dungeon escape item, for no reason other than sheer inconvenience, making you have to backtrack through several floors just to be able to change your party and equipment in preparation for the tough bosses ahead.

There's a dungeon in this game with a gimmick where every time you enter any battle, your whole party loses 50% of their SP. Upon understanding this, you'd be forgiven for deciding to ignore as many battles as possible, so you can actually have the stamina to get to the end. Well, guess what: The boss literally can't be damaged unless you use specific items that you had to get from the battles against the dungeon's regular enemies.

Ultimately, this is Persona 4. It's like this at its very core, and there's just no escaping it. It's as if the game takes pride in going out of its way to make everything as inconvenient as possible. That isn't to say there is nothing to be enjoyed here, as much as it is just a constant reminder that whenever you're having a good time with the game, it'll likely only last so long.

The good here is the kind of stuff you'd expect. It has a well-written story with a fun cast of characters; it has a bunch of side characters you can spend time with and befriend. It has a catchy (though occasionally cringy) soundtrack. It has a fun battle system with really good mechanics. When you get away from the horrendously obnoxious dungeons, walking around Inaba and getting to know people better can be a really enjoyable time. In a lot of ways, this game feels more casual and relaxed than other Persona titles, and it certainly is at its best when nothing of note is happening.

The social links in this game are an especially notable improvement over Persona 3. There are some interesting arcs here, with a lot of well-made scenes that bring the characters to life in interesting ways. Its predecessor had very short social link scenes that felt like incomplete parts of a not so large whole, but these moments are (for the most part) well fleshed out here. It still pales in comparison to the much expanded Confidants from Persona 5, but it certainly is one of the game's biggest strengths.

Another of Persona 4's strengths would be its main story... but while the plot was good and enjoyable, it's far from perfect. The second act here feels like endlessly long filler, and when you get to the good stuff, it doesn't last too long or develop itself in any meaningful ways. The game relies too heavily on a plot twist that is revealed very close to the end, and by then, it's too little, too late. Even the highly regarded main cast, which is undeniably a fun bunch, has a couple of highly annoying faces I wish I didn't have to endure - and there's nothing worse in a game than not being able to talk back to the annoying person that keeps making inappropriate remarks. Especially in a Persona game.

More crucially, I don't know what I was supposed to take away from this story. Maybe I'm spoiled from having played other Persona games, but those tackled serious issues of humanity and society, and had clear themes they revolved around and delivered a powerful message through. At the end of Persona 4, however, I have no idea what the theme here was. I suppose it makes a big deal of "finding yourself", but that's a defining feature of the series as a whole and not something that sets this game apart. What was the theme, really? Fog kills people? Don't spend your life looking at the TV? I have no clue what was the message here, and it makes the whole story feel hollow and, to put it harshly, pointless.

Still... At the end of it all, I don't think I can quite call Persona 4 a bad game. It was enjoyable enough, and made me laugh a few times. On rare occasions, it even got me a bit emotional, even if only a very little bit. It had some of the most fun characters in this franchise and some of its most memorable, though also some of the most obnoxious. The dungeons and boss fights might have all been severely underwhelming, but I'm not sure I'll never feel nostalgic about the (overly long) time I spent in Inaba. Maybe Persona 4 is something I can one day treasure - as long as it's far, far away in the past.