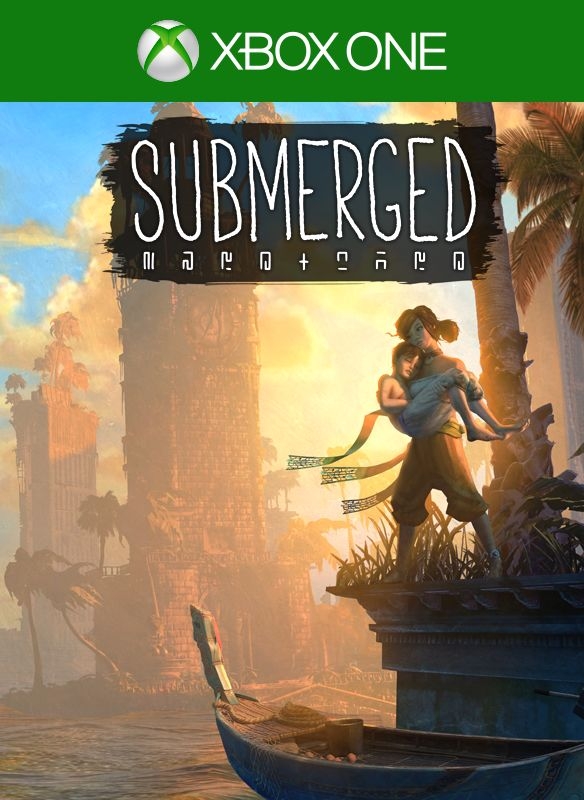 Presentation - 6.0
Gameplay - 2.5
Value - 3.5
With its roots composed of AAA industry veterans, another indie studio sprouts up in the form of Uppercut Games. Which is all the more strange since Uppercut's design problems are so elementary.

There’s a subset of developers itching to create games wholly devoid of button-pounding actions and adrenaline-raising violence. Sometimes, this’ll come in the form of ‘walking simulators’ which strive to elicit an emotional response instead of being fun, in the traditional sense of the term. Crafted by Uppercut Games—bolstered in their accreditation with developers previously involved in the Bioshock, XCOM, and Tribes series, Submerged is a title with which there’s no violence in favor of exploration. The problem is no one there seemed to get the memo that not having such a typical quality isn’t such an audacious feat by itself anymore.

The story’s centered on two siblings who arrive to a wrecked metropolis partially submerged in the sea. By their condition, it appears as though they’ve been on the teetering edge of death for a while aboard their motorized dinghy. Seeking refuge for her gravely injured younger brother, Taku, Miku finds shelter and sets him on a stone plinth—reverberating the iconography and plot setup of The Shadow of The Colossus. And just like in Colossus, Miku’s tasked with surmounting large obstacles in her way to allay Taku’s infirmities. This is done by discovering emergency crates atop specific skyscrapers jutting out of the deep blue and taking those supplies found therein. Fortunately, this place just so happens to be crate capital with every specific supply Miku needs is “conveniently” perched on several distinct buildings across this water-logged conurbation.

Slights aside, Submerged’s story/gameplay structure is a…very interesting dilemma for me to expatiate thoroughly; like two sides of a coin. On one hand, there’s this respectable potential in how three individual stories are told; in the other, there’s not enough substantially done within this story and elsewhere to still make the experience feel meaningful.

The most fascinating aspect of the storytelling is in the greater reliance on visuals over text and voice acting. Miku’s language is just nonsensical patter, akin to Brothers: A Tale of Two Sons; however, it’s—unfortunately—not quite as committed since there’re subtitles momentarily splashed across the HUD (if kept on) showing which item she needs to grab next and specific buildings still have their English names put on-screen during a short cutscene. That aside, the two tiers for learning the epochs of both the siblings and the city are presented through Aztec-like pictographs gradually awarded to the player over time. This city’s story is learnt through optional collectibles scattered across smaller destroyed buildings, most often away from main objectives. Upon surmounting whatever minor obstacle’s in the way, a small sliver of this place’s history is revealed. And there’s no real order to collect them. You may find some in the middle first, the end, and then a few from the chronological beginning. The longer you spend completing these side objectives the more the story begins to fall into place.

The sister-brother dyad on the other hand is shown in a set pattern. Their story is elucidated by accomplishing main objectives with a collection of four given after each completion, akin to a comic strip. Regardless of which emergency crate on the map is grabbed first, the same bits of information are given. This alternation may appear slight, but it presents an interesting web for the player: juggling between strict linearity and patchwork discovery of two different stories. It’s a stimulating concept to think about in game storytelling. Bereft of cinematic flashbacks or audio diaries, we’re introduced to a post-apocalyptic world that’s battered down so much that even communication between outsiders is limited to such primitive means. Not only that, it’s a great way of invoking player inference; having to think pensively about the symbolism within these pictographs and trying to make it all click. 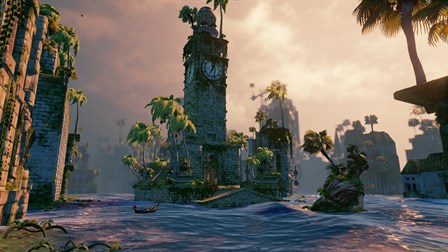 There’s also one other story at play here, a more personal one, gradually noticed over time: the effects this city has on Miku herself. While a slow process at first, the non-verbal ways this is conveyed through her body has a fascinating effect of revealing her debilitation throughout the course of the game.

Being able to relay these types of stories to players with a very conservative use of a nonsensical language is a commendable feat. The other side of the coin now? Well…it’s in how this visual storytelling doesn’t gel with the mechanical aspects of the game, making it feel incredibly bare-bones.

The core gameplay conceit of Submerged is built on fetch quests. Miku has a telescope that finds and marks locations of supply crates, secondary collectibles (sixty total for the City’s Story), and speed boosts floating on the water across the game world. Remember: main objectives are atop some of the highest structures here. I couldn’t think of a worse time in gaming history to have the main goal entirely concentrated around climbing ten unique skyscrapers (possibly twice to double back for missed collectibles) a la Ubisoft radio towers. Aside from sightseeing bonuses and boating around, that’s all there is to it. And it’s not very enthralling.

Once docked, the movement stick is the exclusive means of walking and platforming. Whether it’s climbing up ledges, moving around on lush vines, or shimmying across skinny planks, all challenge is removed by having the game take control in every instance. The whole climb is just a slow, heavily-controlled ascent with no threat of death or blunder. And even after these eventually-grating instances of scaling these buildings, there’s no tangible reward aside from their storied pictographs because the same cut scene—with just little variations later on—plays over and over after completing a main objective. It’s a staggering misstep in losing connection with this game’s world because there’s no steady sign of bringing Taku back to convalescence. He remains a constant until the end. 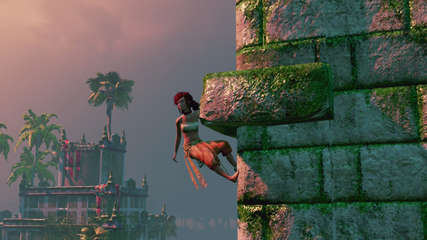 Removing unnecessary clutter and streamlining mechanics isn’t inherently bad design. The problem arises by structurally having the first few minutes of gameplay require the same level of mastery as the last few minutes. Violent combat would’ve certainly not been the key, but it would behoove developers like Uppercut to at least fill the empty void with an emphasis on something that didn’t feel as desultory as this: go boat around for a bit, climb things, and then look at the horizon. Even the climbable landmarks themselves don’t exude any kind of unique personality or path-finding trait to them. Exploration of the whole building, getting all story collectibles, doesn’t really happen by planning but rather adventitious chance of selecting whatever’s off the beaten path. And since the building isn’t a bunch of interconnected ledges, acquiring a minor collectible often results in a dead-end forcing you to backtrack onto the main path.

While stripped of uniqueness from a design perspective, the visuals have an aesthetic charm that still make the world stand out. While it’s silly to think of palm trees sprouting up on penthouses and concrete roofs, it’s still a wonderful sight to see. All of the mossy verdure with incarnadine flowers overwhelming entire sides of a concrete building can constantly goad players into taking screenshots—which the developers figured would happen so they added a postcard mode. The refulgent seas reflecting the sun with mutated sea creatures jumping to and fro equally encourages at least a few videos to be recorded. Whereas a dark or sepia visual filter compliments most game apocalypses, this vivid art style is more inspired by Enslaved: Odyssey To The West.

Such a complimentary comparison to Enslaved is quickly split in twain when considering the components within each world. Whereas Enslaved—even with some evident warts—had vitality and was quick to cover new ground, Submerged is half-empty and laggard to progress. It feels ironically antithetical to what the title implies. Although I think there are some choice moments of visual beauty here, it shouldn’t be enough to just say that’ll do and not even provide the most basic sense of involvement with anything in the world. In this way, Submerged is able to occupy the same kind of space as the Dear Esther’s and Proteus’ of the game-o-sphere: an exercise of peering into the game’s world but never really inhabiting it in any tangible way. 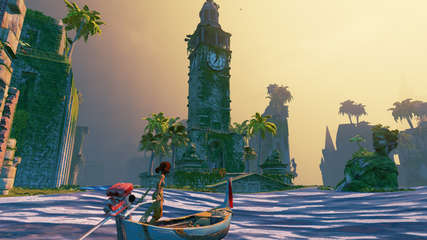 A shame to see Submerged lacking in so many respects when the technical visual design is respectable for this type of game and budget, all in all. Surprisingly, this is one of the first indie games to run on Unreal Engine 4. Complementing the artistic design is a dynamic day/night cycle along with varying weather conditions. The general game feel and wave animations do help make the boating more enjoyable too. Even the draw distance can feel imposing at times and adds to the calm atmosphere when wanting to just explore this wasteland. Unfortunately, there’s complaints to be raised in the inconsistencies of decent and low quality textures, most often subject for complaint when the camera’s zoomed in. I also don’t understand the self-congratulatory attitude developers can have in rendering cloth physics. So much is that the case here that Uppercut’s visual designer(s) couldn’t settle for anything less than three separate pieces of fabric flowing with the wind despite them habitually clipping inside the character’s body.

Audio is the most consistent quality in Submerged. Sound design has the adequate cadences: the thud of Miku’s vessel hitting the sides of buildings, the lapping of the waves, splashes and bellows from radiant sea creatures, the noisy signs of timeworn architecture giving way. Even the acoustics of the boat engine sounds varying between echoes within enclosed spaces to normal in open spaces shows all avenues were considered. Jeff Van Dyck’s soundtrack has a surprising amount of texture and variety to it as well. The way it captures the calm and melancholy moods makes it the one aspect of this game’s advertisement I’d be willing to just copy and paste here. Even though the voice acting is VERY limited to just a few lines, it’s the one facet of sound that still comes off as being a rush job.

Overall, Submerged quickly loses incentive to be played after the early allure of this world starts to peel away. Top it off with an exorbitant price point of twenty dollars (non-sale) for an adventure that can be completed in roughly two to three hours and you can see why I’m being so harsh. And before anyone’s tempted to raise contentions by comparing that runtime with Gone Home—a similar adventure/walking sim title I absolutely enjoyed, it doesn’t hold water when considering GH’s respectable design ethos and inherent replay value as I described in my review of it. The most salient point I kept considering with Submerged was just asking the developers (hypothetically speaking): “okay…what do you have to replace that non-violence with?” Sadly, the only response I could surmise from them was they were too pleased with themselves waving around what ISN’T here rather than what IS. Now I certainly like some of these laid-back games, but what’s central to my liking rests on them at least feeling holistic and having its goals clearly presented to the player. Without that: the journey will feel unfocused. Sure, the background of healing Taku is present early on but it’s also contrary to the game’s inherent systems; as a result, there’s clashing communication presented between the narrative and gameplay. The best on offer in actually feeling a part of this world is gleaning some backstories from a plethora of pictographs in lieu of any kind of narrative urgency. The rest of the time? I was just there—drifting, feeling like a stranger just passing through, no arc nor mark left on this city; and as a result, no enduring impression left on me either.