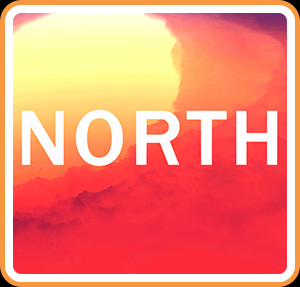 It all goes south in a hurry

Presentation - 3.0
Gameplay - 1.5
Value - 1.5
Outlands leaned far too heavily on transplanting the Kafkaesque immigration struggle into a game, making the entire enterprise a bland experience as a result.

[NOTE: This review does contain SPOILERS for some of the game's themes & topics. Viewer discretion advised.]

2015 was witness to one of the greatest refugee crises in recorded history. The story of so many people either fleeing war torn areas or looking for a better life can be one we all understand, even if we arrive at different conclusions on how to help. This politically potent theme courses through NORTH as developer Outlands Games has made clear. The only problem? Similar to that of 4PM's examination of alcoholism, it never ties a good game to such a rich idea and instead gets muddled by awful design and opaque symbolism, never earning the right to consider itself worthy of note.

The setting is an unnamed industrialist metropolis. You play a character who's recently arrived from down 'south.' He's got a crappy job just trying to make ends meet, his dingy apartment is shared with other strange occupants, and he constantly needs to manage his life with authorities and doctors.

The parallels are clear, but the vagueness surrounding specific time and location does lend to the immigration allegory. More still, illegal aliens occupying this world is taken to the literal extreme; entities with these dark, clay-like bodies that seem malnourished and speak in a foreign tongue. There's already some clear representations here, and that's made me admire it on a surface level, but NORTH goes nowhere in making such a tale feel cohesive.

The first problem comes down to runtime. I acknowledge how I've countered the cost-to-time mentality some gamers tend to be strict with—and still do when appropriate; having said that, such a fugacious experience topping at around thirty minutes to an hour isn't enough time to make you feel like a destitute sojourner. Dear Esther, while not a good walking sim either, made sense in the context of playing the ‘ghost’ of a guilt-ridden character coming to terms with his loss. With all of the poetic exposition, that ephemeral journey is only made to act as a bookend to his terrible tragedy. Here? An allegory of our character's current experience being this compact leaves whatever intended messages to have no bite. There’s so much ground to cover in fully realizing this dystopic world that isn’t given. Players can see our character's dingy apartment, but they're not given chance to subsist with his compatriots as they share a gross mattress together; go to work to witness his hard labor, but only play a dumb mini-game which last 3 minutes; join a cult without getting much in context besides…that's just what the game wants in order to progress.

Most of the narrative beats vacillate between obvious or nonsensical. It's like a highlight reel of painful immigration stories the developers had investigated during development and then slavishly replicating within the game, whilst sprinkling in sneering symbolism for good measure. One odd chapter focuses on him falling into a trance after taking the doctor's medication. The dream involves some simple 'puzzle' of weaving past color-coded female signs to reach the singular male one, representing his closeted homosexuality. While there is signposting for this beforehand—very weak signposting at that, such obtuse delivery about homophobia doesn’t ring a genuine chord like in Gone Home. I mean...it's weird, right? Putting all this effort to establish tacitly understood class conflicts that parallel real-world issues in 'northern' countries, but then consider LGBT issues in the same breath. While I'm not disregarding anti-gay elements existing in North America or Europe (the setting NORTH is clearly mirroring), they basically have a sterling track record compared to the places from which immigrants are fleeing. So, it feels contrived.

One glimmer of interesting storytelling comes from the only substantial kind of it, really. After each completed objective, he's able to saunter over to a mailbox and write a prefabricated letter for his sister back home. Most of these ten-or-so postcards are quite engaging to read. In such a short time, players get to delve into his psyche and consider topics that touch on the real world: the modern-day surveillance state, dealing with his sexuality in a new place (though it's never clear why it'd be an issue here), missing his family, and more. These brief moments interspersed between boring levels are some of its best, but that only exaggerates just how lacking the story feels.

Though lacking in technical acuity, visuals do a better job of communicating this character's overwhelming dread. Tall concrete skyscrapers loom overhead at the beginning and later levels vary between a giant furnace room housing a strange monster nearby, a flat that seems prime candidate to be infested with cockroaches, alongside numerous surrealist landscapes. It's a strange place that—sometimes—does a great job of visually representing the awe and trepidation of what it'd feel like to be a stranger in such a strange land. The only issue is it's often not cohesive in blending so many disparate visual tones. Just like with the story, it plays fast-'n-loose getting the point across without developing the locales.

It's also a mess on the technical side. Once again, I do acknowledge the limited resources and time a team must have for a five-dollar game; with that said, I strain to be so easy-going to another game that could give me a migraine. The Vaseline-rubbed lens applied to several areas was something I never acclimated to, and the inconsistent frame rate was abhorrent at times. I've noticed a few updates have come down the pipeline since my playthrough, though I can't say I'm compelled to reassess how well they've trimmed down on those annoyances. During my time I openly stated "this has got to be one of the worst examples of this engine outside of Early Access games."

Sound would be the best quality here. The design does an adequate job of giving it this oppressive atmosphere. Most locations always have the hum of activity going, either of machinery or otherwise. The few lines of alien dialogue sound distinct as well. The soundtrack runs the gambit between great or unfitting synth beats. The wild, hectic tune while in the refinery was a terrible choice. My migraine escalated a bit upon realizing the team seemed to put little work into balancing the default sound volume for headphones in that specific level, which felt like a trap since I didn’t think of adjusting it in the options menu beforehand.

NORTH follows the first-person walker/puzzler template quite closely, though it's heavier in emphasizing brute force over strategy; in fact, several puzzles are so opaque that a YouTube video later explained to me how I succeeded at one! There's also an odd demand in remembering some notes to your sister to avoid getting a basic fail state, rewinding the clock a few minutes back.

On top of being a failure in puzzle design, lacking features like any kind of save file just seem like boneheaded ideas. Sure, it's a short game and I can follow the game's intention of completing in one sitting. But what about simply planning checkpoints for freak power outages, immediate calls, or something else demanding the player's attention away from the game? Dealing with the slow, annoying opener just to replay the first fifteen minutes is unjust punishment for anyone.

In conclusion, NORTH is a game that seems content in believing the message alone should suffice. And I want to appreciate such a relevant, compelling allegory. But there's only so much traction you can get without also pensively considering how to incorporate the game design, storytelling, and visuals in a way that makes me feel as though I'm experiencing something special. Aside from some emotionally evocative—yet hamfisted—imagery and a few letters to a sister there's nothing more that sold me on that. Ironically, it's an “empathy game” totally indifferent to player connection.