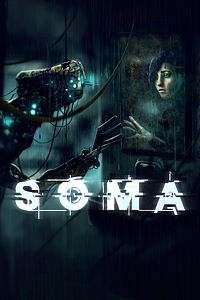 I play, therefore I am

Presentation - 9.5
Gameplay - 7.0
Value - 9.0
One of my favorite video game stories of the 8th generation. And it succeeds not just because of the story's quality but the way it's expressed through this interactive medium.

[IMPORTANT NOTE: Although I'll do my best in avoiding them, SPOILERS are inevitable here.  I'd say even reading anything beyond this hurts the risk of going in as blind as possible, which would be a shame.  Viewer discretion advised.]

Since their inception, Frictional Games has gradually become a household name in horror.  From ambling onto the scene with the Prenumbra episodes, they've grown to being what I'd consider an "indie deluxe" developer: creatively free to do their own projects with a more substantial budget than is expected (around this time).  And that's clear with SOMA in more aspects than anticipated.  Not just about retooling and polishing their homemade engine—which is also true, it's a creative expansion in respect to making one of the ambitious and meaningful narratives in games.

If you're still dawdling to leave—despite warnings above—then you should consider doing that now.  A part of me hoped I'd be able to come in as fresh as some other players: never seeing any underwater screenshots, the E3 trailer, etc.  Because, in a way, players' expectations are subverted by a rather casual beginning.

You take the role of Simon Jarrett, a twenty-something involved in a car accident hoping to find some cure for his traumatic brain injury.  But due to the severity of the crash, Simon’s on borrowed time. His one hope is Dr. Munshi, a neurologist wanting to collect his brain scans.  "It'll be like having your picture taken," Doc casually says.  Simon responds, "You know Native Americans thought having their picture taken would steal their souls?"  After those words, Simon’s been transmitted somewhere...else; the world inside that backroom for Dr. Munshi's research department has transmogrified into a dark, metallic environ filled with strange equipment: computer modules, dive gear, and… this goopy stuff?  He's now on PATHOS-II leagues under the sea.

Initially, I didn't pay heed to the opener.  The walking sim template had an expected design: grab virtually everything in his apartment, get a few collectibles to read, grab something to continue down a simplistic path.  Nothing exciting.  Looking back at it now?  It's actually a good setup as a shock to your senses waking in this strange land.  It's not meant to act as an impediment but instead gives the barest of backgrounds on our protagonist; a tabula rasa that fits that generic likable mold that feeds back to the motif of existentialism.

That background also does a great job of building up your story expectations.  It's not arduous to spot the symbolism: brain-damaged guy wakes up in some foreign place filled with mechanical monsters, black goo leaking through various places, this newfound ability of collecting audio logs by subconsciously 'reaching out' to certain robots and wall stands.  Put two and two together and eventually a personal allegory of Jarrett's tragedy and mental state seem to be the big 'twist' to all of this.  But Frictional isn't satisfied with that kind of story; instead, those concepts work as background to a more intricate sci-fi narrative.

This is a story stuffed to the gills with interesting concepts too.  The goo previously referred to is actually an AI.  Simon's tale to discovering why he's truly here, along with the discovery of Earth’s current state.  The newfound task is giving the human race some semblance of immortality.  There's a balancing act of all these different ideas that's expertly woven together to reaffirm the game's view of identity.  By god, even his own underwhelming lack of motivation ties back into the theme of existentialism!  I'm still trying to make this an non-spoiler-y as possible, but I think that last sentence will make sense to anyone who's finished it.

The game's core which ties this altogether is the relationship between Simon and Catherine.  You see...when it comes to all the humans scattered throughout the PATHOS-II's sub-stations many have become something else.  Whether more flesh or machine is sometimes hard to distinguish.  Many of the game's biggest set pieces revolve around doing terrible actions against these different-albeit-conscious entities.  This same idea is transplanted to Catherine, now relegated as a walkie-talkie only able to converse when plugged into a terminal.  She's a melding of Halo's Cortana and Firewatch's Delilah.  But the way she's utilized punctuates the imposing sense of isolation whenever she's being carried around.  Heh...carrying around 'someone' on an Omnitool.  But that's what makes the dynamic so fascinating: two distinct personalities playing off each other in disparate situations who view their actions in a different light.  Catherine doesn't even have a shell to call a body, yet her demeanor is calming amongst everything else.  Those long bouts of separation from her, of not hearing any consolation about entering a new area, of only unearthing the final seconds of an underwater diver's death on the ocean floor, makes that pining for her that much more palpable.  Of the many thing Frictional does well, seeping this anxiety through game design is incredible.

There’s some criticism laid against the game that ties into both the game's story & gameplay: the AI construct known as the WAU.  Sometimes suggestions of them solely being here as the designated monster-of-the-week for SOMA to have some scares.  But that does an injustice to how fascinating they are as an AI enemy and how they tie back into the central point.  Despite the more showy parts of the game, they're not another HAL having what almost feels like a vendetta against its crew; instead, they're a much more believable construct akin to a ‘mistaken virus,’ shall we say.  It’s programmed to maintain humanity’s existence yet unable to process what’s the most ethical way to do so.  The end result is some wonderfully grotesque imagery; and given how their purpose is explained, they're actually one of the most grounded AI's in games—and pop culture in general.

SOMA's story is one of the most menacing in games to date.  Because...it's not relying on spooky monsters or pools of blood (those are here too!); instead, it's a pensive examination of identity, purpose, and humanity in which ALL of said themes harmonize with the gameplay, both in the quieter and more intense setpiece moments. 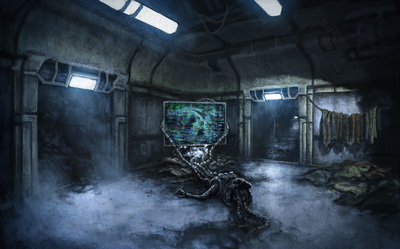 But...the way in which the gameplay's incorporated comes with a catch.  Since this is Frictional's first foray back into crafting a game since The Dark Descent, the 'streamlining' of these monster encounters compared to their previous is a tough sticking point.  Whilst the hide-and-seek base template is still here, free of combat and upgrade trees, there's no extra complexities to consider like balancing a sanity meter or barricading a door to temporarily impede an enemy's progress.  No, the base idea comes in getting out of their line of sight, throwing an object as a distraction if need be, and slinking past to reach the objective.  There's a few nuances within the encounters but that's the baseline expectation.  One particular encounter felt unpolished in its implementation: a creature you couldn't look directly at within a confined space.  The creature's path-finding sometimes felt broken in respect to getting past it.

The simplicity doesn't overthrow the vividness and structure of this world, however.  Within PATHOS-II there's dials to turn, switches to flip, screens to touch, objects to examine, and bulkheads to scour.  At every turn there's a demand and encouragement of interaction that sells this world much more thoroughly than the average sci-fi game, more so than many walking sims too.  Beyond just a storytelling purpose, certain areas do utilize this interaction in interesting ways when avoiding monsters.  A sub-floor/basement section around the game's mid-point would likely be the best of the game's monster encounters: a two-tiered layout of first managing a lock via computer screen while maneuvering around this abandoned area, using various doors and hallways to keep the monster momentarily distracted.

Outside of just hiding from monsters, there are a few puzzles and interactive choices, which oftentimes act as the game's setpieces.  Choice is something else that's gotten a bit of flak elsewhere.  But demanding radical consequences to them goes against the game's themes.  It's not about hoping to unlock a special ending; Frictional had a very specific one in mind.  What does result in these choices is a further questioning of the player-character’s choice based on this given situation.

SOMA's gameplay design won't exactly come back winning awards, and stepping away from Dark Descent's interesting complexity & more-open level design may bother some fans.  But what's been replaced is a simpler game of hide-and-seek subsumed with small design details that harmonize and elevate the tone it's trying to maintain. 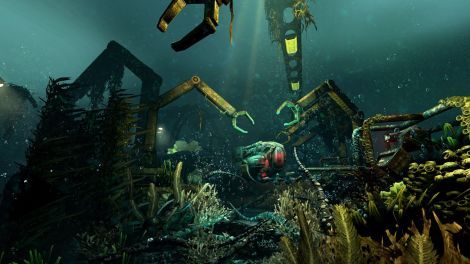 Following in the "Triple-I" template, Frictional has created one of the most beautiful underwater locales.  One fresh to the game wouldn't expect to hear that when considering the beginning of the game.  Beyond from the flat lighting, the opening segments don't really exact much enthusiasm.  Past that however, the visual polish and complexity found within PATHOS-II oftentimes reminded me of Alien: Isolation.  While not up to the same bar as that AAA title, it does take a lot of inspiration in respect to the mechanical aesthetic.  The creature designs vary wildly: a boxy monster bedecked with Christmas lights, algae-infested bipedal chicken nuggets, sea creatures, and more.  Frictional's HPL 3 Engine isn't that far behind what's found in Alien, bolstered by its own original art style to boot.

Presentational praises extend further to SOMA's sound design.  From the audible distortions to the monster's screams, everything within this world sounds appropriate and fits perfectly with the game's story.  Although Catherine's VA (Nell Mooney) is worth some accolades, Simon Jarrett's VA (Jared Zues) sometimes came off as flat.  It's tough to graph whether that came down to the direction they were going for with the character or not.  Soundtrack is limited, but fits roundly with the aesthetic.  The main theme remains burned in my memory to this day.

In conclusion, SOMA rests upon the pantheon of sci-fi horror games.  But that acclaim is awarded not from being an unnerving haunted house to traipse through; instead, the most horrifying things come hours later when the implications of some actions revisit your mind.  It succeeds as being one of the most thought-out game stories to date.  The balance of so many layered concepts are thoroughly blended and married within the game's design, setting, and visual feedback to an extent I can’t help but admire.  Come for the monsters, stay for the philosophical musings.

coolbeans' 2015 Game of the Year Nominee