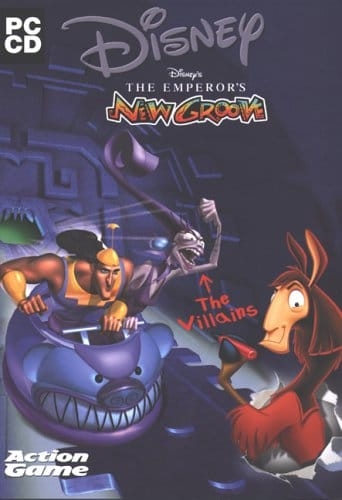 A not that very llamative platformer from the realm of licensed games.

Presentation - 7.0
Gameplay - 4.0
Value - 4.0
Disney's The Emperor's New Groove is a 3D platformer made by Argonaut Games PLC. While not very remarkable in terms of other platformers, it gets along by a decent presentation and sense of humor.

It is fun to look back to what the videogame landscape used to be, especially since it’s evolved so much in so little time, how quick some trends grow and how quick they are to die as well. One of the aspects of gaming that’s changed the most (and at the same time the least) is the least is the subject of licensed games. I’ve mentioned in previous reviews that this particular group of games were seen for the most part as just tie-ins to the original sources, either as a means of advertisement or as a way to increase its profits through merchandising. Many ended up following templates left by other, more popular games. And in general, the most used genre for this licensed games was the platformer. To be fair, it’s not hard to see why: not only there are plenty of great platformer models to follow, both in 2D or in 3D, but they also are relatively easy to make, since the goal and the design philosophy of most platformers are quite straight forward: get from point A to point B, jumping and avoiding obstacles and enemies. And because most of this games had a pretty tight schedule to follow (they had to release alongside the product they’re tied to, after all), usually design takes a hit to make up for the short time. Though it’s fair to say there were examples of games that used the original product’s themes and style to patch the overall final product to pretty decent results. One of this examples is Disney’s The Emperor’s New Groove.

The Emperor’s New Groove is a 3D platformer made by Argonaut Games and published by Disney Interactive for the PC and PS1 (with a later digital release on PSP and PS3 a decade later). The game follows the typical formula that many other movie licensed games did during the 2000s. There is also a Game Boy game, but considering that’s a completely different game and it was made by a different studio, I won’t comment on it, despite sharing the name and general branding. It takes the events of the movie and loosely recreates them. Like in its namesake movie, the selfish Emperor Kuzco has been transformed into a llama by his old subordinate Yzma, who has seized control of the empire. With the help of a peasant named Pacha, he has to travel back to his palace to try to recover his throne and his human form.

Before I start the review, a bit of warning, I’ve played the PC version of this game, and because it’s quite an old game, it crashed frequently, not enough to be unplayable, but frequently enough it merits a mentions.

The game follow a very simple formula. You play as Kuzco the llama, exploring maps based of the movie’s locations. You can move, you have a standard attack that can be combined with your movement options (attacking while moving becomes a spin attack, whereas attacking while jumping becomes a jump kick), and you can also run using a charge meter. Those are the basis for the entire game. Movement-wise, I feel this is similar to the original Spyro the Dragon, which makes sense considering it came out around a year before this. Alongside this option, there’s a raisin throwing mode, which shifts to a first person perspective to deal with enemies at a distance, but it’s mostly used to deal with puzzles and environmental obstacles. That’s pretty much all your character can do during regular gameplay, though the game will spice things up from time to time by allowing you to transform into different animals, each of them with different abilities and moves, with puzzles and levels tailor made to their new skills. It feels nice to play with them, particularly the turtle’s racing games, and it’s nice to slide down certain maps racing to the finish line using the shell to slide down any incline. The controls of the camera are problematic, though. It moves automatically behind your character, and while you can manually move it, it’s going to have problems on certain spots. For example, the camera works relatively fine during the slower portions of gameplay, but when it picks up some speed, it will have problems to catch up, letting you open for unnecessary falls or crashes if you get too careless. And likewise, spaces too narrow will make the camera jitter like crazy, which is certainly annoying. This game was designed with relatively open spaces in mind, and it shows.

The level design is, in a word, simple. The levels are very clean and to the point, with very little to distract the player from the game itself. You will rarely see an element in the game that’s purely for decoration, it will always be used for something, either as platforms or part of a puzzle or to hide secrets within the levels. Most of the levels are pretty straight forward, usually divided into certain “rooms” that can you enter and exit using doors or crevices. The game also makes heavy emphasis on environmental and platforming puzzles. They aren’t particularly challenging in the least, but it keeps the gameplay varied throughout the playthrough. The game will also throw at you multiple game modes, which again helps the game from becoming too similar. You have labyrinth levels with an overhead camera, you have chase levels, you have kart levels, you have stealth levels, you have river levels where you have to avoid obstacles while the current drags you down… They are for the most part harmless enough, with the exception of that one jaguar chase level, which basically boils down to quickly bashing the charge button until you reach the end, with very limited platforming other than a needed jump or two. There’s also the frequent use of enemies as obstacles, again based on many of the critters and enemies in the movie. Each of them will need certain form of attack to be dealt with, though the charge and the jump kick can reliably take down most enemies. The only enemies that can pose a real threat are the royal guards, considering their animation kind of protects them from certain moves for a bit, and even they can be dealt with easily with the jump kick. Environmental obstacles aren’t too complicated either, boiling down to your typical pits, spikes, water currents (you have multiple river levels but you get hurt by water during regular stages, go figure), swinging knives of doom… The levels are also inhabited by NPCs that will either help you, challenge you, or just to make a joke. Which is also one of the game’s strengths. While the game is definitively not a comedic masterpiece, it does have a sense of humor, with many moments of self-depreciation and 4th wall breaking, plus a decent amount of absurd humor. It’s by no means the best comedy game of all time, but it’s all right.

There is also the aspect of item collecting. Each level has a limited amount of coins, which you will need to collect to increase your charge gauge each level. It’s not particularly hard to max it out, but it’s always nice to have it as soon as possible to make some platforming sections faster. Finding all of the coins can be difficult, since all levels have multiple secret areas you need to access to in order to get the extra coins left. It can force you to play a level multiple times, and every time you have to get them all. The other items you can pick up are idols, which are basically keys needed to open certain doors, and the “wompy”. The “wompy” is an item that works as a continue, letting you spawn in the last check point, basically functioning as an extra life. You get one wompy for most levels, and it’s always hidden. You can accumulate many wompies, but take into account that, once you exit the game, you will lose them automatically, they only carry over to the next level if you continue playing. And while that seems a big issue, it ends up not bothering that much.

No, the biggest issue this game has is its difficulty. It’s easy. Too easy. Mind numbingly easy at points. The levels are short, so there are never enough obstacles in the way to make you fail. The platforming sections are extremely simple most of the time, and where they are not you can always find a handy supply of healing items (many of them infinitely reusable). The puzzles are quite simple, and while many of them follow the rules of showing the mechanics first and twisting them more and more the longer you progress, it never becomes anything close to challenging. And there are control points everywhere, so even if you die you don’t lose that much progress. Even the bosses end up being quite harmless, as they have easy patterns to detect and counteract. And in certain levels you will have access to an unlimited amount of continues, so even in the highest spikes of difficulty you won’t be at risk. I get that it was intended for younger audiences, but this low level of difficulty is something else. On the upside, if you want to play a game you can just steamroll without any effort, this is the game. And let’s face it, sometimes you just want to relax and play something that offers little to no resistance, even if it’s just to chill and kill time. And to be fair, this game is not short by any means, it’s just very easy to beat. There are eight areas in the game, each with 3 or 5 levels, so it at least compensates the low difficulty.

Presentation-wise, this game is surprisingly strong. The fact this was meant to be on a PS1 forced a much tighter world design than it otherwise would have. The worlds are very simply designed, with clear colors and very stylized designs. Its cartoony presentation actually gives it a lot of personality, and alongside its sense of humor and its great soundtrack (and I do mean great, it’s both really energetic and atmospheric when it needs to be, a standout of the game) it makes playing this quite entertaining. Also, despite this being a rather old game you can get the resolution up to 1280x1024 pixels. It looks surprisingly good with that resolution, the colors really pop up. As an extra, you can access to bonus contents if you get all of the items on a level, but it's not that valuable, a couple of design and sketches of the game/movie's production.

Overall, The Emperor’s New Groove doesn’t do that much new or that particularly great, neither by 2000’s or today’s standards. It’s one of many games that ended up buried under the sea of licensed videogames with good reason, and even though it had the potential of being a much stronger title, the short development time and creative constrictions made anything more complex an impossibility. Still, it’s always nice to pick up a game you can’t lose once in a while.