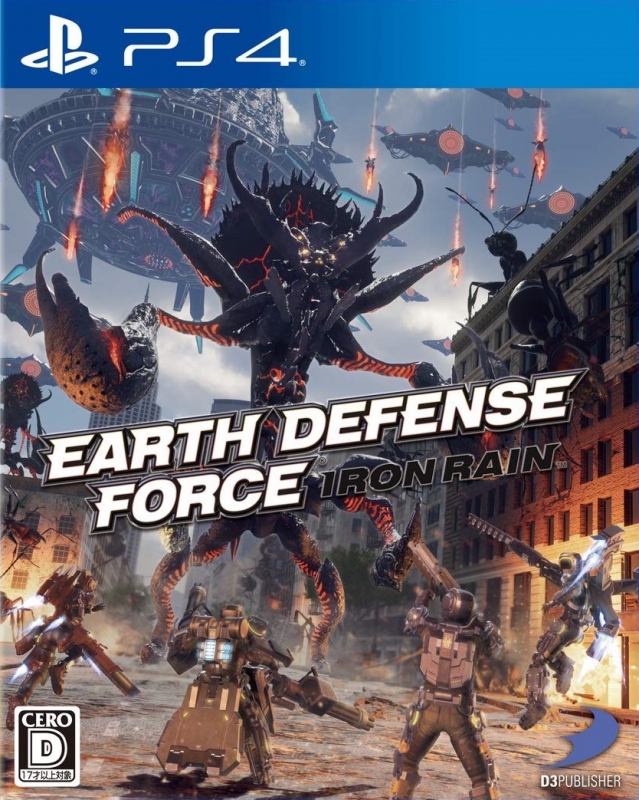 Earth Defense Force Iron Rain is a ''save the world'' chaotic solo and co-op shooter that is developed by YUKE'S and published by D3 Publisher. Once again you will take the reigns of the valiant people of EDF as you fend off against an alien invasion and against people known as The Kindred Rebellion. Humans?! They look just like us!

Set in the year 2040, you once again take on the role of one of the many members of the Earth Defense Force in order to fend off the alien invasion that has destroyed most of humanity. Following your characters near death experience in the year 2033 which lead to you falling into a coma, you now wake up 7 years later to find the war against the aggressors has escalated to something much much worse. You must now gear up for action and take the fight up once more on behalf of all the people on Earth.

At it's core Iron Rain stays true to the roots of the EDF franchise, providing the player with large scale combat,destructible environments,a crazy variety of giant bugs and enemies to kill and much more. However there are some very notable changes to the formula that have been presented this time around that I feel both help the game and at the same time might hurt it a little too. I'll try to explain this a little bit without going on too long of a rant(I say that but I bet I'll still do it)

Iron Rain keeps its traditional class based combat in tact by allowing you to select between multiple classes,each involving their own variety of skills and their own stats. You have your traditional trooper who is more of an on the ground type of class,Jet Lifter which is a flying based class giving you the ability to hover for short distances,heavy striker that boosts defense and the newest addition of Prowl Rider. This class brings new ways to move around the world with a zip line ability that allows you to act like spider-man and also allows you to summon up enemy monsters to help you fight.

The first three classes are your traditional classes that you've seen variations of in past EDF games, so I won't go into them that much,but its the newest addition of Prowl Rider I'd like to touch upon because it goes into the positive additions for this game. With Prowl Rider you're able to summon one type of enemy per round using your Overdrive ability. You may summon an ant that's main focus is a frontal all out attack,summon a giant spider that allows you to shoot its silk and bind enemies, while also releasing a horde of baby spiders on your enemies,etc. Out of all the classes,this one is the most unique out of them all and offers the most diverse way to play the game.

With the addition of Prowl Rider, there are other notable additions to this game that I feel boost the game in a positive direction and things I hope the main series after this entry either continues to explore or even goes beyond. The first thing I'd like to mention is Overdrives. These allow you to get a short boost of momentum for your player that heals all your stat effects such as poison or slowness and gives you a quicker reload time depending on the gun you're using. This addition is extremely helpful because this game does not hold back on you and throws hundreds of enemies at you at any given moment. Without this addition, I'd have to say the game would get way more frustrating.

A more obvious plus for the series would be the graphics. Iron Rain has stepped up the series in a huge way this go around and all the enemies,environments and gigantic monsters look absolutely superb. The only thing I find lacking in this department though would be the character models, they still aren't very good and lack real variety. But even though overall graphics look way better, this tends to cause problems with the frame rate as well, seeing many many dips when the action gets a little too crazy. Hopefully in the next EDF title this can be properly addressed or a patch can be released.

While there are lots of positives to mention, I gotta speak about some of the stuff that was done in the game that I either question or didn't find all that compelling. One of those things has to do with the games customization. On paper you can unlock a ton of weapons and a ton of clothes and cosmetics, but it all comes with a price,literally. A lot of the customization items cost way too much, some items making you buy 30 pieces of head/body/lower body gear at 200-2500 currency each, only then have you pay another 100k on top of it to get the item you actually want. This holds true for special items such as vehicles,grenades,health regen. Once you buy an item, every time you use it in battle, it will charge you again. For instance, say you buy a health refill for 500 currency, use it in battle and it costs you 500 currency again. This means every mission you use it, it takes that amount of money off your end level total of money gained,even though you already own the item. I don't like it.

This makes the game turn into more of a grind fest in the long run because if you use multiple health regens, grenades and even summon vehicles to help, all of those individually will take away from your end level total of money gained which can cost you thousands. While its not mandatory to buy or use these items, I still feel it makes the game more of a chore to play due to how long some missions take(30-40 min) and losing all that money at the end of a long play period can be a little disheartening at the end of the day,especially after a long hard battle.

The first 15-20 levels of the game you might have some issues with the way it feels to progress your character and it will feel like you're actually not making big strides in beefing up your character or getting stronger, since it takes quite a bit to get going. A lot of the early game weapons you unlock and receive do not seems all that different from each other, hit points and stat wise,which really doesnt justify how much some of them cost. Iron Rain is a lot harder than previous EDF games so you will find yourself at times getting overwhelmed by large packs of enemies and find yourself playing long games of cat and mouse and hiding due to the fact that you feel SO weak compared to your enemy no matter what you do. Besides feeling weaker than your enemy, you're also MUCH slower than EVERY enemy in the game this time around as well, a big change from previous EDF games.

In Iron Rain, no matter what class you play as, every single enemy ranging from Spiders,Ants,Scorpions,Beetles,Drones,they're all faster than you and you can't run from any of them,no matter how hard you try and this is disappointing. You cant run to get cover or be overly strategic because the weight of each character in this game went with the more realistic approach than in previous EDF games. Each character feels clunkier and weighed down to what they would feel like with more realistic physics and with a wonky crazy franchise like EDF, that doesn't really work here at all.

I know, I'm getting a bit ranty on the negatives, but trust me, the game is still fun! What the game does negatively, it really does make up for it and keep the fun charm of the series as a whole. Shooting down enemy drones and airships is even more satisfying now than it was previously in past EDF games due to the updated graphics and even MORE destructible environments. The guns you get in the later end of the game are basically rewards to you for sticking through the game and it completely makes up for early weapon choices that were lacking. Also being able to summon your own enemy bug to fight on your side and actually being able to ride them and control them is something they absolutely need to keep for EDF 6 or any spin offs going forward, it's just too damn fun.

The game is extremely short in the mission department compared to a game like EDF 4.1 and EDF 5. While those two titles sport 100+ missions in each of them, Iron Rain only gives you 52 total missions to play through. Normally I would gripe about this and be up in arms,however, each level is substantially longer in Iron Rain than in previous titles, with each taking anywhere from 20 minutes to even 40 minutes to make it through if you're successful. The main campaign is also on a much bigger scale with cinematic cutscenes that tell you the story in much greater detail. The boss fights in the game are also on a whole other level compared to previous EDF games in terms of sheer scale and destruction. The boss fights in Iron Rain are absolutely MONSTROUS(pun intended) and some were simply jaw dropping. These are boss fights I'd replay again and again.

So you see with everything I mentioned so far in this review,you can see the reason why the header of the review talks about this game being a mixed bag. It has elements that just work and are a great addition, but at the same time it has elements that really hold it back or I find not really needed. But I feel the biggest flaw against the game itself is its netcode for online play. I co-opped this with another friend and they constantly had glitching issues,clipping,freezing and falling through the game map. While it did straighten out after 15 missions, early on in the game it was nearly unplayable for him. I've played EDF 4.1 and EDF 5 with this same person and those issues never happened once during those play sessions. Hopefully its something that can be patched sooner or later and hopefully fixed by the next title.

One last thing I want to touch upon is a new game play addition called Mercenary Mode. This is the first time in the series history where you can be competitive against 2-8 players online. In this mode you have to collect gems for your team,while defeating hordes of enemies in the process. The team with the most gems at the end of the run is your winner. This is a good addition that allows for more replayability after you have successfully beaten the main games story campaign.

Iron Rain does do great things like bigger scale boss fights, better graphics, destructible environments,new classes,longer missions and a more epic cinematic story mode, but it hinders itself with a stingy loot/customization system,framerate issues,slow feeling of progression,glitchy online system. As a big EDF fan, buying this at $60 is a no brainer for me because its my go to get away style of game that I play and turn my brain off with some co op fun. But to the average consumer who may find issue with my negatives and isn't really into the franchise, I'd have to say wait for the price drop to around $40, once it hits $40, pick this up,you'll have a ton of fun!

Earth Defense Force Iron Rain is out now on Playstation 4