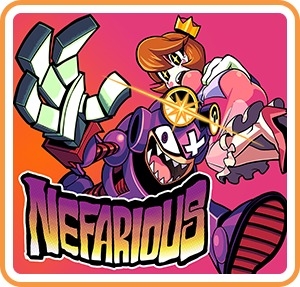 Nefarious is a 2D action platformer published by Digerati and developed by StarBalde that puts YOU in the shoes of the evil villain rather than the hero for a change. Take on the role of the evil genius Crow as he tries to kidnap princesses from all over the land in order to achieve his ultimate goal of world domination.

Sometimes its just boring being a hero and saving the day. But now its time to show the world that the evil genius's of the world are the true characters we should be cheering on. Play as the evil genius Crow as you and your assistant Becky figure out which kingdom's princess you wish to conquer next. Finally it is time to show these heroes just who is boss around here once and for all!

As stated above, Nefarious is a 2D action platformer that puts you in the shoes of the villain this time. Its a stark change from the regular run of the mill hero vs villain games that were all used to playing and the concept of this is absolutely great. You get to play from the perspective of an annoyed evil genius who just wants to take over the world and shape it as he sees fit. I mean, is that so much to ask? however, every single time the main hero always seems to thwart him, but, this time is definitely different because now he has a REALLY good plan, one that will NOT fail this time! I'm serious!

Since this game is an action platformer,obviously you're going to get some form of attack to use against your enemies and while its not that expansive, it does get the job done.  As Crow you get attacks such as your regular melee attack,which you can upgrade to explosive punches, as well as get access to grenades that you can throw at enemies or throw them at specific doors in order to get them to open. It's not the best combat system ever,but hey, it works.

If there was a gripe I had to give about the combat and the character movement though, it would have to be that movement feels very stiff and at times delayed. It feels like you have to press the buttons hard to make your character move a certain direction and when jumping in any direction, your character feels heavy and the controls feel very awkward. It will take some time to get used to because you have to adjust your own timing of hits and projectiles in order to compensate for this. Its annoying at first, I have to say, but you do get used it after awhile and completely forget about it after 20 min or so. But I had to mention it just to warn potential customers of this.

But don't get too comfortable with your time with this game, by the time you really get into the groove, its already over. That's right, this game is extremely short, I'm talking 2-3hrs worth depending on your skill level. You have to travel through 5 different kingdoms in order to beat the game and some of the levels can/will take you anywhere from 10-25 min to complete if you manage to blow through them.

But even with the game being really short, the dialogue from the heroes,villains and the boss fights more than make up for this. Nefarious works as both an homage and a spoof of the traditional ''rescue the princess'' trend. The boss fights in this game let you take on the role of the villain and enables you to utilize all the hi-tech machinery you'd normally see people like Robotnik in Sonic use. Speaking of Sonic, there's one boss fight  that is just like Robotnik's ball and chain weapon from the original Sonic games and there's even a few easter eggs of dialogue that spoofs on the games as well. Its highly entertaining!

While there is only 5 kingdoms, they're actually designed nicely. One minute you're in a city fighting against police robots and cops and another you're trying to go through an insect kingdom to kidnap their princess. Each area is different and offers their own platforming challenges,enemy variety and challenging boss fights that are not only entertaining to play, but also hilarious to read due to the way comedy in this game is structured. This is a title that can get you to come back to it and play over and over due to its length and charm through comedy.

Now onto my favorite part of this game, the humor. This game spoofs on so many different franchises and games that nearly everyone that plays this will get what they're talking about when they make a specific reference. Some of my favorite moments are when you kidnap a certain princess and she doesn't really care because it happens so often that she now just expects the highest quality food, her own room and just wants to stare out the base off the balcony for ''dramatic purposes''.   I want to go on and on about some more of the funny moments, but it would completely ruin it for the reader and be a disservice to the developers who made the game. It has to be experienced first hand to be fully appreciated.

Overall Nefarious is a very entertaining but short game. It does have its shortcomings with the way the character jumps,stiffness and the feeling of movements being delayed, but other than that, the game offers you a great and different perspective from the eyes of the villains themselves. I really wish more games would do this, because it offers the player a vast new way of experiencing the hero vs villain trope and when done in the way Nefarious does it, it can make you laugh over and over with its comedic approach.

I feel confident in giving this game a thumbs up and the go ahead to check out. If you're in the mood for a funny,but short,story about villains overcoming the heroes,then this is the game for you.

Nefarious is out now on Nintendo Switch