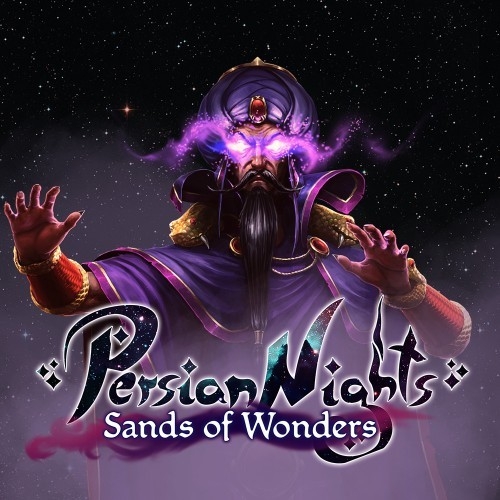 Persian Nights: Sands Of Wonders is a point and click adventure game developed by Sodigital and published by Artifex Mundi. Taking the point and click puzzle adventure genre and expanding upon it from previous games, Sodigital and Artifex Mundi put you in a new world of many mysteries and its up to you figure them out and learn how to stop a plague from spreading throughout the land.

In a kingdom on the edge of ruin and turmoil, a demonic man known as Grand Vizier Zaved holds the entire nation within his control and grasp. As his reign of terror spreads across the land, so to does a shadowy dark plague. You must take on the role of Tara,a apothecary,and not only find out the cause of this plague,but also bring an end to this evil reign of terror.

Having been a fan of Artifex Mundi and the type of games they make and publish in regards to this genre, I was super excited to get the opportunity to see where they went with this new entry into their catalog. You see I have previously reviewed three of their titles, a series called Enigmatis and had given it a positive score. Now being able to review another one of their titles, I have the ground work layed out for me so now I'll have something to compare it to and find out how the genre has moved forward or backwards since then. The way it was meant to be done!

Upon playing this game you're going to notice similarities to stuff like Aladdin and basically most other ''awakened evil'' storylines that you've played before. The reason why I specifically mention Aladdin is because it's the first thing that popped into my head when playing this story. The kingdoms king has gone gravely ill,hes the good guy, people openly follow him without much worry,however upon falling ill, one of his closest friends and personal allies shows his true colors and becomes evil. You see what I mean? It may be a whole new world in this game but its definitely very very similar to Aladdin in that regard. This is not necessarily a bad thing, we all love evil wizards/sorcerers and bad guys in general,right?

But wait, that's not the end of it, suddenly a strange plague engulfs the land and spreading faster every day. This is where you finally start getting into the game yourself and you are now in charge of not only stopping the evil Grand Vizier, but also finding out the cure for this plague. You take on the role of Tara, a young apothecary who has been trying to find a cure for this disease for some time now, but she just can't seem to crack the code on the root of the cause.  But this changes when she travels and meets more allies.

Throughout the game you are going to come across multiple characters who will not only give you hints on what to do next,but will also offer interesting dialogue or flat out just tell you what to do. I won't give away which characters are which because I feel that would take away from any surprise,so ha. For now we'll  stay focused on the main character Tara. Even though shes failed a lot to prove herself worthy of finding the plagues cure, she doesn't give into the riff raf, her nothing but a street rat? I don't buy that.

Once you get to the first temple of the game, you start to realize you got into a situation that you might not have been ready for. But to prove yourself, you take on the task of solving the plagues mystery and ultimately coming to the realization that you will have to go toe to toe with the head man himself, Jafar, I mean Grand Vizier.  This will involve tons more mysteries and magic beyond your comprehension. Take a seat, you're in for a bumpy ride.

Each new area you go to will involve you having to do a lot of hidden item tasks such as searching here, opening this and solving puzzles, lots of searching mini games. Since this a point and click game, I guess you should've expected that.  Some puzzles are more elaborate than others where you have to combine multiple ideas into one in order to completely solve it via multitasking, while others are more straight forward and seem like they were more streamlined to help a more casual player get their feet wet and attune them to the type of stuff they should expect later on,but only on a harder level.

Like in previous Artfiex Mundi games, you will come across various items to collect along your journey and they will all be placed into your inventory for later use. Some items you get may be immediately usable, while others you won't be able to figure out where they're useful until a specific part of the game or when certain conditions are met. Some of their uses may be completely obvious and some others will make you question what the developers were thinking when coming up with the puzzle they're involved with, like the heck guys? It will get to the point where you start thinking they're the type of people who would mistake a monkey for a sultan! gah! but I digress. But even if you get truly stuck on a puzzle, Artfiex Mundi always gives you a skill option to show you where to go,so you'll never have to worry about being stuck for too long or get bored. You are the real MVP's Artifex. We appreciate you.

The game itself isn't very long at all. In fact I think its shorter than the previous three games from Artifex that I played in the Enigmatis series. That doesn't necessarily mean its a bad game, It's just shorter than I was expecting overall. But maybe that is for the best when looking at this game from a rational perspective. While I stated above the puzzles can be both obvious and even head scratching at times, they still pale in comparison to puzzles I came across in the Enigmatis series and I feel they aren't up to the same standard as those were. This is mildly depressing, but not a huge game changer or deal breaker overall.

One of the things that this game does have over Enigmatis is the use of multiple characters that actually mean something. In this game will you get to control someone other than the main character and have it actually mean something. Your main character Tara is also able to show off her useful skills in apothecary to come up with different spells,ingredients and formulas in order to help herself and her allies from the shadowy menace that attempts to take them. Be warned however, some of these ingredients for her spells/craft will have to be found on their own and won't be provided for you. So make sure you search anything and everything when you can.

The art style and graphics used for Persian Nights is a huge step up from the Enigmatis series. While Enigmatis games don't necessary look bad at all, It's just the style used here looks way more fleshed out and they're way more animated and lively. It actually helps you get really immersed in the game when playing it due to that alone. Another plus for the game is the voice acting,its been vastly improved from their previous entries of Enigmatis, I was shocked. If you've read my Enigmatis review, then you know one of my critiques in relation to those games that I considered lackluster,was the voice acting. But that issue here is completely gone and I'm extremely happy for that,kudos for Artifex stepping up their game and upping the quality for its consumers.

After completing the game and now being able to accurately compare it to Enigmatis, I can say that it's not massively better than Enigmatis, but it's not worse than the game either.  For everything this game seems to be better at compared to Enigmatis,such as voice acting,graphics and art style, the same can be said for the stuff that it lacks in comparison to the previous game as well. This is in regards to shorter story length and some lackluster puzzles. The game definitely isn't perfect, but it does have an interesting story,great atmosphere and likable characters and I feel confident in saying people should check this out if they're looking for an interesting point and click puzzle adventure game to add to their library.

Persian Nights: Sands Of Wonder is out now on Nintendo Switch.