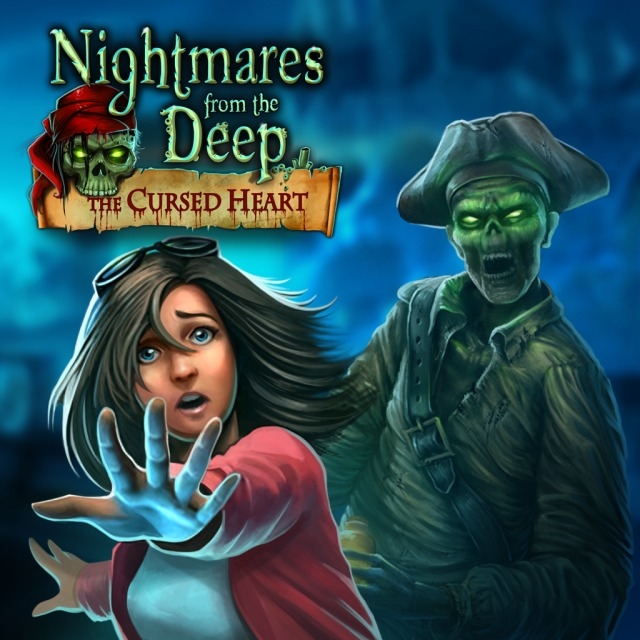 Nightmares From The Deep: The Cursed Heart (PS4)

Nightmares From The Deep trilogy is a point and click puzzle adventure series developed and published by Artifex Mundi. Take part in a mystery that has many things to hide and many things to discover. Can you survive this nightmare from the deep?

You play as a museum owner who has received a strange delivery that you were not expecting. Your daughter lets curiosity get the best of her and she decides to open it to see just what is inside. Little did she know that she had just awakened an ancient pirate who's one goal is to resurrect his long dead mistress. The now awakened pirate kidnaps your daughter and plans to use her as a sacrifice by stealing her life force in order to complete the resurrection. Now it is up to you to stop him from fulfilling these plans and to save your daughter in the process.

The Nightmares From The Deep series consists of three main games that all have interconnected stories that tie everything about the story together. Each game stars the main character,Sara,a museum owner, and her daughter,as they work together to unravel the mysteries of ancient pirate curses and the true power and origin of the legendary pirate himself, Davy Jones. This is really all the set up you need to get yourself ready for the things that lie ahead.

The first game in the trilogy is called ''The Cursed Heart''. In this installment,Sara receives a mysterious crate that she's curious to examine. Upon stepping away for a minute to find something she's looking for, her daughter decides it was a good idea to investigate the crate herself, what a dummy! Upon opening the crate,their worst fears come to light, an ancient evil, and curse, has awakened the dormant pirate who'm then proceeds to kidnap Sara's daughter. She is to be used as a sacrifice to resurrect his long lost mistress. Its up to you now to bring her back.

The main locations in The Cursed Heart have you going through various areas on a secluded pirate island. On this island you will discover many mysteries about the curse of the pirates and also the full truth around the main villain's true motives and complete history of what drove him to go so far. As with any Artifex Mundi game, all game play revolves around point and clicking and seeking out hidden objects to collect and use,while also solving many riddles and puzzles along the way.

Some of the puzzles range from the usual puzzle collecting mash ups where the name of the item you're looking for is shown at the bottom of the screen and then it is your job to look through all the debris and rubble in order to find that object.  While other times the game requires you to search around like a detective to find any clues that can lead to a solving of a future puzzle/mini game or allow you to collect items of importance for later use.  Some items you stumble upon may have immediate use and some may take hours before you even get a chance to find out what they're used for. Although some items uses are more obvious than others.

What I like about the first game in the series and well this entire trilogy in general is that they put more emphasis on learning the history behind the villains themselves and it really lets you get to know the person you're dealing with. In the first game by collecting 12 coins, you get 12 different cutscenes telling the complete story of the the villain's past and his motivations that drive him. You end up actually starting to side in a way with the bad guy himself. It's written nicely and pulled off really well and I really liked the approach taken here.

The second game in the trilogy titled ''Sirens Call'' takes place a short time after the events of The Cursed Heart. This time a mysterious man approaches you and needs your help to figure out the power behind a magical artifact. But as soon as you are starting to figure it out, you and your new friend are attacked by enemies from the sea, who attack you and steal the artifact. Sara just can't catch a break can she? sheesh!

Upon awakening from your attack by the fish people from the sea, you set sail to a town in the middle of an ocean where the main villain of the story is reeking havoc upon. The citizens are terrified because the villain has gotten his hands on the magical artifact and now wants to use it to summon the giant monster known as Kraken. With him wielding that much power, no one in the entire world would stand a chance against him. But there is hope to stop him, one person that is powerful enough to defeat him is a mermaid called ''The Siren''. Only her power is able to completely control the Kraken and stop it from rampaging and destroying everything in its path.

With the knowledge in mind,its up to you,Sara and your newly found fish like friend to save Siren and help her stop the kraken before it destroys anyone else. This game is more action oriented than The Cursed Heart because it focuses much more on ''stopping the evil villain'' rather than show you the human side and the goodness that still lies underneath of the evil persons soul. This villain is pure evil and there's no feeling sorry for him. This is why its much more action oriented and more intense than the previous entry in the series .

Game play remains the same as the previous game. Anymore about it would just result in me talking in circles and saying the same things over and over. So I'll just reiterate that it relies on the the point and click find the object type of game play and leave it at that so I don't become one big long run on sentence.

Finally we get to the last game in the trilogy ''Davy Jones''. This is the final and biggest installment of the trilogy and for good reason too. This the final climax that deals with the legendary pirate himself and you finally get a chance to settle the score and break the horrid curses that he has laid upon thousands and thousands of people throughout his life and throughout his death.

Once again we play as good ol bad luck Sara, who once again finds herself forced into an adventure she didnt ask for. When giving a speech to an audience at her museum, a strange phenomenon takes place that brings upon the live in person appearance of the deadly Davy Jones himself and he is NOT happy.  Angry at Sara for exposing his long laid to rest secrets, he decides you need to pay for your crimes against him and takes you and your daughter hostage on his ship where you will be held prisoner for as long as he deems necessary.

This is actually my favorite entry in the entire trilogy due to the fact that it offers you action,moments of intensity and is generally really endearing for us as the audience to experience. You are given the full story of why Davy Jones has done what he has been doing this whole time,why hes been as evil as hes been, why he has cursed everyone with not being able to be free and die. I do not want to spoil the outcome for everyone, but I will just say its very touching and It really makes you feel for the guy with what hes gone through,regardless of past actions. Almost reminds me of Thanos like scenario where ''the ends justify the means'' type of deal.

While the game play doesn't offer much more than the last two games offer you,meaning its pretty much treading the same grounds as those games,the settings however in this game make up for it.  The setting takes place in the stronghold of Davy Jones himself and everything has not only a dark atmosphere to it but also a bright colored look to it as well at the same time via lighting. This really make areas stand out as if its filled with magic and mystery. Its a really great atmosphere to play through in some of these new areas due to you wondering the history behind each area and what secrets may lie in store next for you. Also a plus for this game relates to some of the puzzles,while not completely breaking the mold of the previous games, actually do offer a tiny bit more variety and creativity than the last two games. Just enough to keep your interest and just enough to entertain you.

I played through this entire trilogy in one big long marathon livestream that took me roughly 10hrs to complete and my opinions at the end of the day after playing it come off as overall positive on it. The saving grace of this trilogy is the story and character development itself. If the trilogy had focused less on story and character development and it just had the game play to carry it, then I don't think I'd be sitting here today giving it positive views.

This is not a knock on the game play as a whole, but more so saying that while the game play can be fun and engaging, having the same game play vary very little from each entry in the trilogy wouldn't be enough to carry this to a positive score without an interesting and engaging story there to compliment it.  That's how I feel about it.

So lastly when it all comes down to it, I feel I can give the thumbs up and recommend people to definitely check out this trilogy whenever they get the chance to and hopefully end up enjoying the story as much as I did.

Nightmares From The Deep 1,2,3 is out now on Playstation 4 and Nintendo Switch