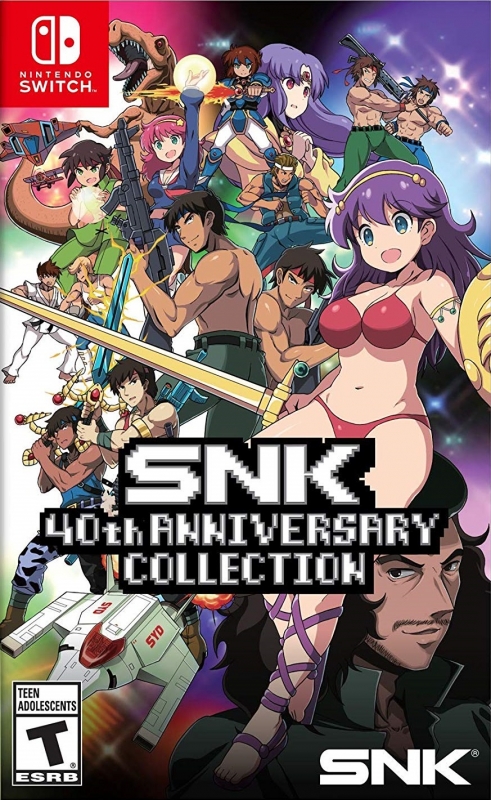 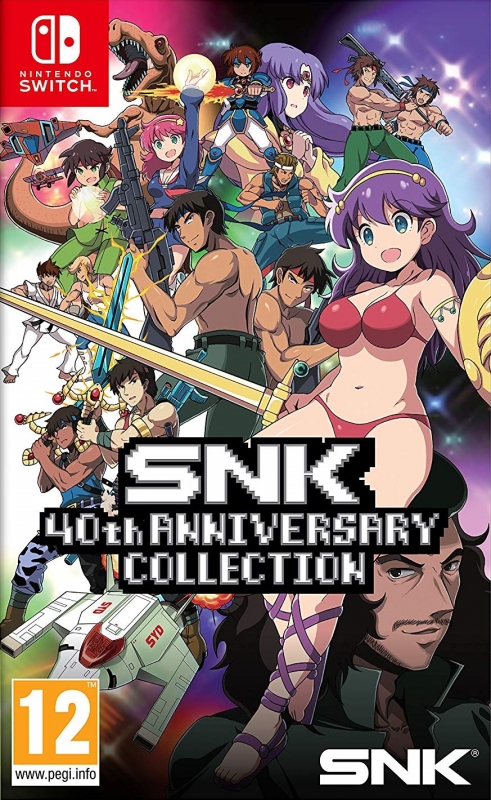 Relive the glory days of the past all over again with SNK's 40th Anniversary Collection celebrating 40 years of classic arcade titles from the golden age of gaming. 40 years of history makes itself known again for a new generation,but this time now on the Nintendo Switch.

This is the part of my reviews where I normally go into my breakdown of a game's storyline,basic story and path a specific game goes. However, since this is a compilation collection of arcade titles/console,there's really no need for me to get into those specifics,but instead give a break down on what titles are included in this collection and what they have/don't have to offer you the consumer and the reader. So let's get to it!

It's really hard to believe that SNK has been doing these types of classic games that are on this compilation for 40 years now. It's not a number to be taken lightly or over looked, SNK has time and time again proven its ability to give us consumers high quality and enjoyable games. Which of course most people remember these fond memories and games from their time with the Neo Geo in the 1990's. At least personally that's where my journey with SNK really took off.

The amount of content you get in this compilation starts with around 14 individual titles to play as soon as you boot up your game. But within the course of the next month,most notably December 11th, 11 new titles will be added to the games library, 9 via a patch and the other two available on the eshop, all 11 absolutely free. You can't argue with that now,can you? Titles to be added will be games such as Beast Busters and SAR: Search And Rescue.

In this collection you will play classic titles such as Ikari Warriors trilogy,Guerilla War,Iron Tank,Prehistoric Isle and many others. One of the main things you will notice about this collection is that there is a good variety of genres represented here in this offering,some of which range from twin stick shooters,run and gun shooters,brawlers,platformers,etc. One thing is for sure, nearly every type of gamer will find at least one or two titles they will fall in love with and get completely hooked on.

One of the coolest features in these games gives you the option to pick and choose not only between their NES and arcade counterparts,but also switch between the games very own regions too. This at times can make you feel like you're playing two different games every now and then due to the quality difference from the arcade to the nes versions. Sure, while its not a complete game changer in the literal sense, the difference between the two versions in both controls and overall look do make quite a bit of difference to people like myself.

If you're new to any of these games or if you're even a veteran who has been here from the very beginning, then you will know that these games offer quite a challenge,some more so than others. For people like me playing these as I grew up,all the way now into adulthood,its still difficult at times for me to play through these without suffering a bit because of the difficulty they can bring. But there seems to be a remedy to my dilemma and hopefully it will solve yours too,because what I am talking about here is a rewind feature that's implemented into the game. With the rewind feature you're able to rewind all the mistakes you make,big or small, and rectify this until you complete the game. That's right, all those years of failure will finally pay off,and like me, you'll finally be able to complete some of these great games you never got the chance to beat before! woohoo!

As I stated earlier there are a few twin stick shooter games found in this compilation, but I feel there's something that should be mentioned that's coming in the day one patch for this title next week,additional tweaks to the twin stick controls. In the day one patch there will be a single stick implementation into the game that allows all twin stick shooter games in the collection to be played with one single stick so that you and a buddy can both play the game co op with one joy con each. But also added in addition to these is an auto fire feature so all you have to do is aim and not worry about holding or pressing down a button. Personally I feel these are going to be a great additions and makes total sense given the nature of these games. Way more accessible and more inviting to a broader range of gamers.

(Additional note: With the above additions to the game there will also be fixes to the audio and aspect ratio's of the games upon downloading of the day one patch)

But with all the good must come the bad,right? While I can't really think of too many negatives to point out about this compilation,I do have to state my gripes on certain things I found with the game/games. I noticed a bit of game stuttering here and there at certain points and also ran into various glitches in certain games,nothing game breaking,just minor annoyances. However, I'm not really sure I should file these as complete negatives just yet as the day one patch with the fixes to aspect ratio might actually remedy all these problems and make them a thing of the past. But just keep an open mind and be on the look out for any of these incidents in the mean time.

At the end of the day,I feel you can chalk up this as another successful compilation done by the folks over at Digital Eclipse. You may remember them from their works on Street Fighter 30th Anniversary Collection and Mega Man Legacy Collection. With this new compilation collection they bring their skill and talent and give the classic SNK titles the love and appreciation they deserve. From the great selection of titles, to the December addition of 11 new titles,the additional updates day one improving and making new additions that effect the game play and all the way down to the emulation itself. SNK 40th Anniversary Collection to me is a must have even despite the negatives I mentioned earlier.

SNK 40th Anniversary Collection is out NOW on Nintendo Switch