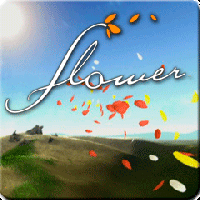 Presentation - 9.5
Gameplay - 8.5
Value - 7.0
Flower is a masterpiece, which shows that videogames and tranquility can in fact go hand in hand.

*Disclaimer*
I go by the same scoring scale as Edge and Eurogamer. Where in my older reviews, a mediocre game would have been around 7, now this will be 5. I will also only go by whole numbers in my final score.
*/Disclaimer*

The discussion of whether or not videogames can be considered a form of art or not has been going on for some time, but there are never a lot of examples to support the idea of videogames being art. Even so, Flower remains one of the most, if not THE most prominent example of this.

As I am a firm believer that this game must be experienced, I will avoid going into great detail, as I do not wish to spoil anything, even mildly.

Presentation wise, Flower is nearly perfect. The sights can be breathtaking, and you will rarely feel like anything you see in the game is anything less than staggeringly beautiful. There are virtually no technical issues to speak off, as the game maintains a rocksteady framerate, with no graphical glitches of any kind.

The musical score is memorable and serves to elevate the game even further. Without the music, Flower would be much less of a masterpiece.

The gameplay is quite simple. You use the motioncontrols of your PS3 controller to control the wind and move a flower petal around to other flowers and thus increase the amount of petals you move around, with a nice amount of twists to this mechanic so that you never get tired of it.

I will only say this about the story: It's there, even if you don't notice it at first, and it will have you feeling emotions that few videogames ever evoke.

The storytelling in the game is superb, with the way it conveys feeling, but never actually tells you the story.

All of these things come together, and create an experience like no other, and the game's only real fault is a lack of value when compared to equally priced games. But I would still give this game a grand recommendation, even at double the price point.