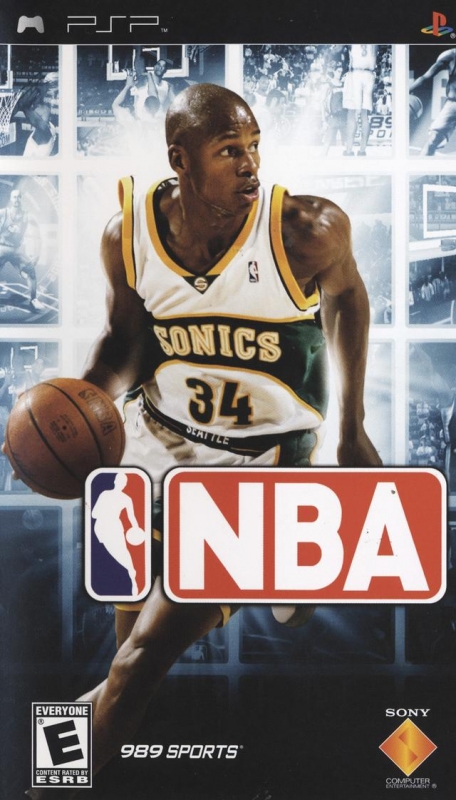 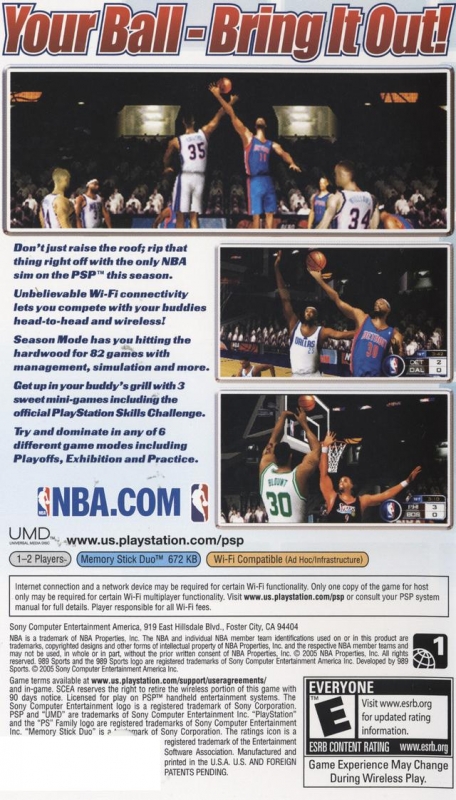 Okay where to begin? I guess I'll take it from the top. As soon as you pop this sucker into your PSP you get 4 options on the main menu.  I'll take you through each option.

1. Quick Play - Well this ones simple. You pick 2 teams. You control one of them. All 30 teams are available with a rating to show how good they are. Theres also Western/Eastern All Stars, Team USA, Team Europe, Team World, and 6 NBA development league teams.

2. Well I've never played it online, but I would assume that you get to own some chump 1 on 1 and you each pick your team. I doubt anyone playes this game at all, let alone online, so probably not even worth trying.

3. Well your choices for game modes are practice. You pick a team and you just shoot around. Theres no ratings for individual players in this game so this is how you can test people out to see who are your shooters.

Theres exhibition which is the EXACT same as going to quick play. Honestly why would you hit [Game Modes] -> [Exhibition] when its even easier to hit [Quick play]??

Theres season which you control 1 team and go through either a 29, 58, or 82 game season. Season is fun but its not very good. You can freely trade players with any team, theres no salaries or salary cap and no trade gets rejected. So its up to you if you want to keep your team how it is or make an all star team. I choose the latter to win every game. And once you got your team you can play each game or simulate its up to you. After the seasons done it goes to playoffs which you can again simulate or play. All in all pretty fun, but very simple.

Lastly theres playoffs. You decide if its single elimination, best of 3, best of 5 or best of 7. Injuries on or off, how many teams will compete per conference from 1 to 8 and how you want the brackets to be set up (2004 playoffs, random, or manual). Its pretty fun and simple. You can simulate or play as usual.

4. So for Mini games you have skills challenge, paint, and 3 pt contest. The 3 point contest is just like you'd expect, you pick up to 8 guys and see who can sink the most 3's. For paint, you pick 2 guys, and the court is divided up into sections and if you sink a shot then the section will turn red or blue depending which team your on. When time runs out whichever colour fills up the court the most wins. For skills competition you pick 4 guys and run through the NBA skills challenge like you see during all-star weekend, its okay.

Okay so I've covered each game mode now I'll talk about the gameplay and some pros and cons of the game.

Well the gameplay is simple yet effective. The thing I really like about this game is how you shoot the ball as opposed to NBA live. When you tap the "O" button a halo appears over the ball which starts out red, then turns orange, then turns green, then back to red. The idea is to top "O" again when the colour of the halo is green to make the shot. If you hit "O" when the halo is orange you might make it, and when the halo is red you miss the shot. This is good because its up to your timing skills rather than luck like in NBA live.

The controls are simple, yet very effective. For offence "O" shoots the ball, "X" passes the ball, "square" does a shitty deke and I forget what "triangle" does. L1 brings up a button over each players head so you can choose who to pass to and R1 is a modifier so the "X" does an alley-oop and "square" does a different deke.

On defence "square" attempts to steal the ball, "triangle" attempts to block an opponents shot, "X" changes player and "O" is take a charge. L1 makes it so you can choose your player easier and R1 does nothing I think.

As for directional buttons they chance your strategy. On defence you switch between a 2-3 zone, a 3-2 zone, man to man, and full court press.

Well the graphics are pretty lousy. But to be fair that doesn't really matter in a sports game and another thing this game was made in 2005, pretty sure it was a launch title, so lets be nice. I'll throw in some shitty screenshots if I can find any on google. They're good enough, you can tell where the ball is and the players look different from each other which is nice.

+ The shooting system is much better than in NBA live. Its based on your skills and timing rather than random chance.

+ Controls are simple, and very effective. They aren't complicated like in some games.

+ Graphics are respectable for a launch title (or a 2005 title, not sure) and they aren't a problem.

- The season mode is pretty shitty. All trades get accepted, there are no salaries. Its more like playing a series of 82 straight exhibition matches then it is a season.

- Well I know I put graphics as a plus but they are pretty lousy. As I said they're good enough, but they aren't breathtaking by any means.

Some asshole dunking the ball 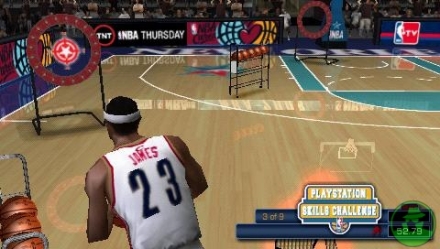 Here's a screenshot from NBA 08. Okay this IS NOT the game I just reviews. I included this pic because it shows the halo thing I was talking about. See the guy at the top of the screen the ball has a green halo around it, therefore he will make the shot :)

Overall this is a fun and decent NBA game for the PSP. It doesn't have many good game modes and the graphics are bad, but for a game that came out in the first year of the PSP's existance and the first NBA game on the system...Not a bad game at all.

This game gets decent marks for presentation because of average graphics, high marks for gameplay due to its effective halo system rather than the NBA live system, and low marks for value because of its lack of game modes (such as a dynasty mode like in NBA live)