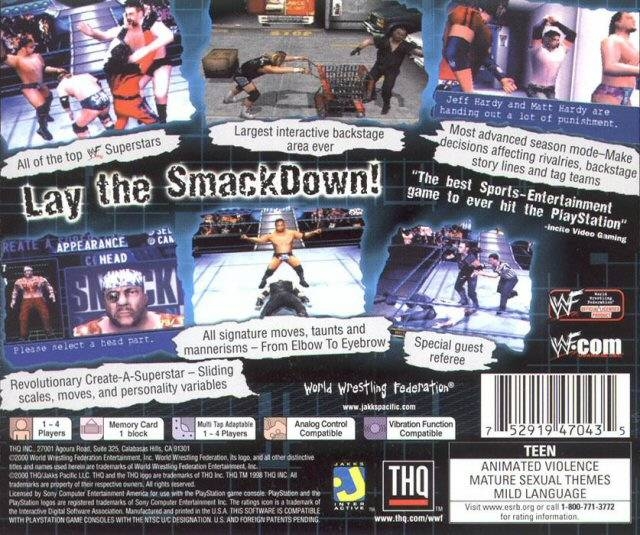 Exit match:
Press Start + Select during a match to exit to the main menu.

I Quit win:
For I Quit win, grab the mic and press Circle when your opponent is flat on the ground.

Tag Team win:
This trick can only be done in a tag team match -- make sure you are allowed to get out of the ring and are controlling player one. Get out of the ring, and lure your tag team partner over to the opponent's tag team partner. Let your partner fight your opponent's partner, then quickly get in the ring and pin your opponent to prevent him from stopping the 3-count.

Easy pin:
Play as Stone Cold and whip your opponent into the corner. Start punching him until he falls down. Pick him up, press L2 to give the taunt, and deliver the Stunner (Left + Circle). If you hook one leg there is a better chance that he is not going to get out of the pin.

Switch to fight other opponent:
When fighting Royal Rumbles, Battle Royals, 3-way dances, or any other match with more than one opponent, press R2 to fight the other opponent.

Keep season mode titles from changing hands:
Simply take the people that are eligible for a title in season mode out. In some cases such as the Tag Title or Hardcore, you cannot do this because there are too many people, However, this works well with the WWF Heavyweight title and the Women's title.

The Acolytes (APA):
Create a tag team match with Farooq and Bradshaw and they will appear as the Acolytes.

New Age Outlaws:
Just create a tag team match with the Road Dogg and Bad Ass Billy Gunn and they appear with the New Age Outlaws video, music and name.

The Dudly Boyz:
In a tag team match, select Buh Buh Ray and D'von and they will appear as the Dudley Boyz.

The Hardy Boyz:
In a tag team match, select Matt and Jeff Hardy and they will appear as the Hardy Boyz.

Hardy Boyz feud:
When making a created character take him through pre-season under the hard difficulty setting. When the Hardy Boyz confront you to talk about your match say "Thanks!" or if your creating a character set the "Characteristics" to Matt Hardy+ or Jeff Hardy+. Then, after you are finished with pre-season, go to season mode. If you have Jeff Hardy+ on your profile, Jeff Hardy will come out to help, same thing as if it were Matt Hardy+. If Jeff comes out to help you during your match on season mode (has to be set to hard difficulty) and it is Matt Hardy you are fighting, you and Jeff will feud with Matt Hardy. Same thing it would be if Matt Hardy was interfering in your match with Jeff. Your created character and Matt Hardy will feud with Jeff Hardy.

Attack Stone Cold Steve Austin:
Win all your matches in pre-season mode until you fight Mankind. Lose to him and you will fight the Rock. Win that match and win the next match. Win the Royal Rumble. Defeat the Rock & Sock Connection in a handicap match. Then, during Wrestle Mania, the Undertaker will ask you to attack Austin -- say "Yes". Before the main event, the Undertaker and your created wrestler will attack Stone Cold Steve Austin.

Bloodbath:
If you have a feud with Gangrel in pre-season, you will get a Bloodbath in the normal season mode. Note: It might take some time for Gangrel to do this. Alternately, select Gangrel and skip all matches in season mode. Eventually, you will see Gangrel doing his Bloodbath.

Change weapons:
Press R1 to pick up a weapon. Then throw it out of the ring, and go outside the ring. Get close to the ring. as you would to get back in. Press R1 while facing the ring. Your wrestler will grab another weapon from under the ring. You can keep repeat this until getting the weapon of your choice.

Climbing out of the cage:
Go near the cage, press R1, and when you have climbed a short distance, repeatedly press Up.

Skip over downed opponent:
Press L2 to skip over a opponent that is on the ground.

Ball Breaker on the post:
Note: This is a difficult trick to perform. Throw your opponent to the any of the four posts, but make sure they are standing towards you or has their head on the ring post. Once this is done, get out of the ring as quickly as possible and grab your leg of your opponent that is closer to the post. If done correctly, your opponent will fall and your wrestler can perform the Ball Breaker.

Perform your finisher:
You will be able to do your finisher after you get a green dot. On your meter, the Smackdown logo will light up when you are in the right spot. From there, just press L1.

When your meter has all of the dots highlighted, simply press L1 from the position from which you hit your finisher. Example: To perform Jeff Hardy's Senton Bomb, knock your opponent down on the ground with all of your dots highlighted, climb the turnbuckle, and press L1.

Face opponent's back when picking up:
Press Circle(2) when picking up your opponent. This is useful for wrestler such as Road Dogg when performing a finishing move.

Fast special:
Repeatedly press L2 (taunt) in a match to gain quick power instead of waiting for the taunt to finish.

Instead of beating the other opponents up until you get your special move, continually throw your opponent out and press the L2 (taunt). Do not wait for the taunt to end -- just rapidly press it.

The following strategy with Steve Austin can be used to fill up the red bar and gives you a finisher when it is filled. Keep doing the Austin Elbow Drop (Right + X) when someone is on the mat to fill up the bar.

Do special without using a dot:
When your meter says "Smackdown", instead of pressing L1 press Left + Circle. Note: This does not work for all wrestlers -- sometimes they will just do a special move.

Combo moves:
Each wrestler has a combo. Repeatedly press X and they will do a 4-5 hit combo.

Roll out of the ring:
When you get knocked down, hold toward the direction you want to roll out of and keep pressing R1 after you start to roll..

Using the Irish Whip:
Press Circle to grapple your opponent, then your wrestler will do an Irish Whip. You can actually whip your opponent in any direction by pressing the D-pad. This trick is very useful when you are playing a Royal Rumble type match.

Character traits:
After completing most pre-seasons, and throughout them, you will be shown notes such as Wealth+, Kane+, and Royal Rumble-. When creating a new wrestler, use one of these secret traits under "Characteristics" to get the aid of the more powerful wrestlers such as the Undertaker, Kane, and Austin. This is helpful when you are ready to create the ultimate undefeated wrestler once you have won pre-season and finished season.
Back to Cheats