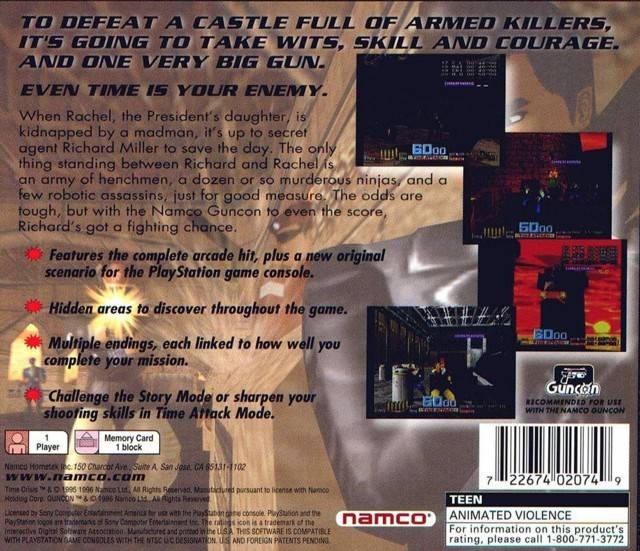 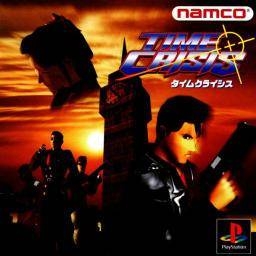 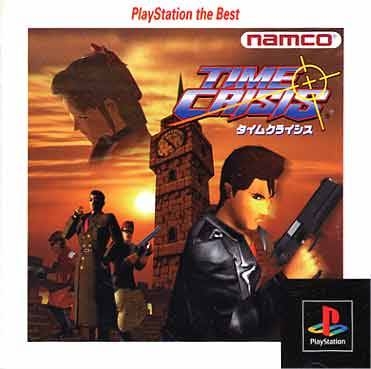 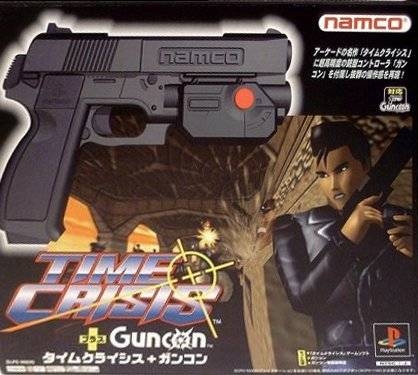 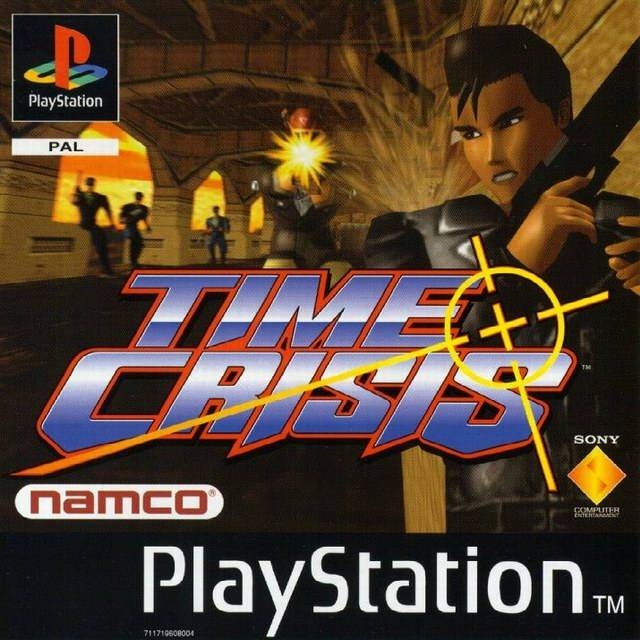 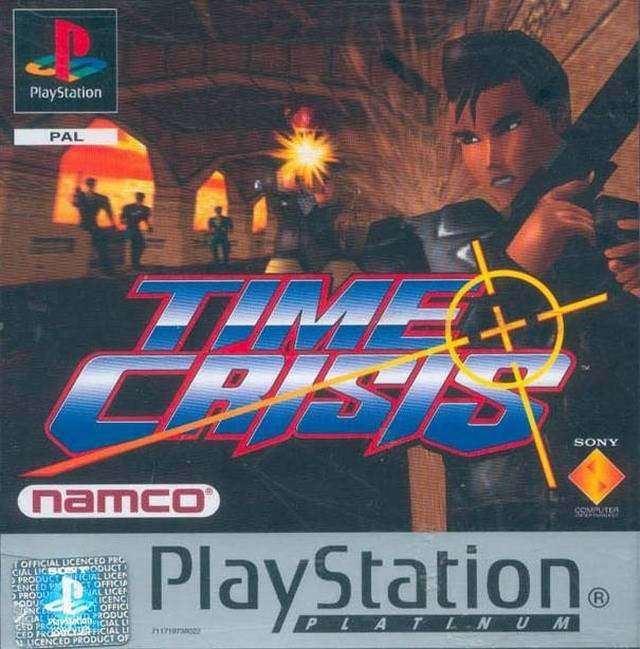 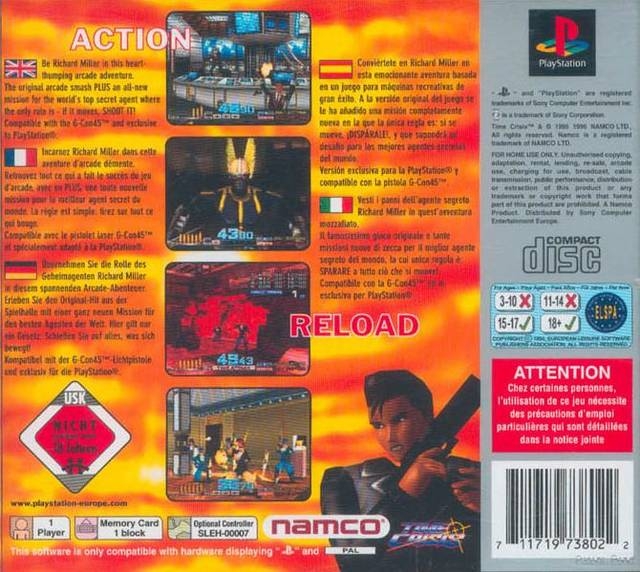 Cheat mode
Wait until the main screen with the three target boxes appear. Shoot the hole in the center of the letter "R" in the word "CRISIS" twice, then shoot inside the cross hairs that are next to the word "TIME" twice . A cheat menu with life, credit, and shot options will appear. These options may be used to enable nine lives, unlimited credits, and no reload mode. Note: Your aim must be extremely precise when firing at the screen. Aiming from just off the screen is recommended.

Saving time:
When first shooting the men with the shields in level 1, area 1, try to shoot the people there faster, so the door does not close. Also in the same level and area, when shooting near the forklift, shoot the box to blow it up.

More time:
To get extra seconds, shoot the men in orange.

Secret menu:
1. Shoot the top center of the R in CRISIS at the title screen (the one with the three game options) twice.
2. Shoot the center of the cross hair above the CRISIS twice.
3. You should be taken to a secret menu where you can choose from several different modes.

Easier Game:
When you choose the normal story mode from the title screen and can choose either Normal Play or Time Attack, shoot anywhere off-screen. The words EASY will appear next to the Normal Play mode on the screen. This gives you five hits in the game instead of three.

Alternate reload:
Press Triangle, Circle, Square, or X on a standard controller in port two to hide or reload instead of using the red gun button. Because you can reload using on controller two (when using the G-Con 45 peripheral gun), you can give an arcade style feel to the game by using your toe to press any button, like you would with the arcade pedal. This will leave both hands free, to aim as precisely as possible. Note: This is not officially recommended by NAMCO, and only is used as an alternate method to reloading in the game.

Alternate Moz deaths:
Land the final shot when Moz is on the ground, he will fall over onto his back. However, if you manage to shoot Moz during the jump attack, he will die by falling down off the pillar and land on his front.

Alternate Sherudo Garo shout:
During the battle with Garo in scenes 1 and 2, shoot him when he is at the bottom right to hear a different tone of voice when he shouts in pain.

Special Mode Area tasks:
The following information explains what you must do to reach all the different areas in Special Mode:

Ballroom (Area 2-A):
At the final part in area 1, shoot all the gunmen before the doors on the nearest lift close. (Shooting the orange men is optional.) If you succeed, you will take the elevator up to the Ballroom.

Shopping Mall (Area 2-B):
Do the same as to get to the Ballroom, but wait until the elevator doors close before shooting the final gunman. You will have to take the stairs instead, which leads to the Shopping Mall.

Swimming Pool (Area 3-A):
At the final part in the Ballroom, get to Kantaris and you will confront Web Spinner. He is lightning fast, extremely agile, has a powerful kick attack and high voltage boomerangs of his own design. Defeat him in under 50 seconds and Kantaris will still be there. She will escape through a quick secret passage which takes you to the Swimming Pool.

Arms Factory (Area 3-B):
Defeat Web Spinner in over 50 seconds. Kantaris will have already escaped elsewhere, thus not opening up the secret passage. The path you take instead enters into the door of the Arms Factory. Alternately, shoot the glass that is at the top of the crane in the Crane Center (the final part of the Shopping Mall). The crane will explode and blast a hole through the wall. Inspect the hole to find it leads to the Arms Factory.

Parking Lot (Boss Area 4-C), medium difficulty:
Do not blow up the crane in the Crane Center and you will go to the other passage that takes you to the Parking Lot. Alternately, shoot at the gas canisters in the Arms Factory. The explosion is so large that you have no choice but to take the lift, straight down to the Parking Lot.

Lounge (Boss Area 4-B), hard difficulty:
At the final part of the Swimming Pool, allow two or more orange men to escape. (You do not get any extra time for shooting those men.) You then quickly duck out of a manager's/sergeant's sight. You then stealthily follow him and the others through the door and open it to find you are at the steps leading to the Lounge. Alternately, do not explode the Gas Canisters in the Arms Factory and you can safely walk past them over to the door that goes to the Lounge.

Heliport (Boss Area 4-A), hard difficulty:
Do not miss two or more orange men at the final part of the Swimming Pool. You will not have to duck down, and instead look up to see Kantaris glaring at you. She is very angry indeed! You take the steps up to the very top of the Headquarters, where you must prepare for the final showdown.
Back to Cheats