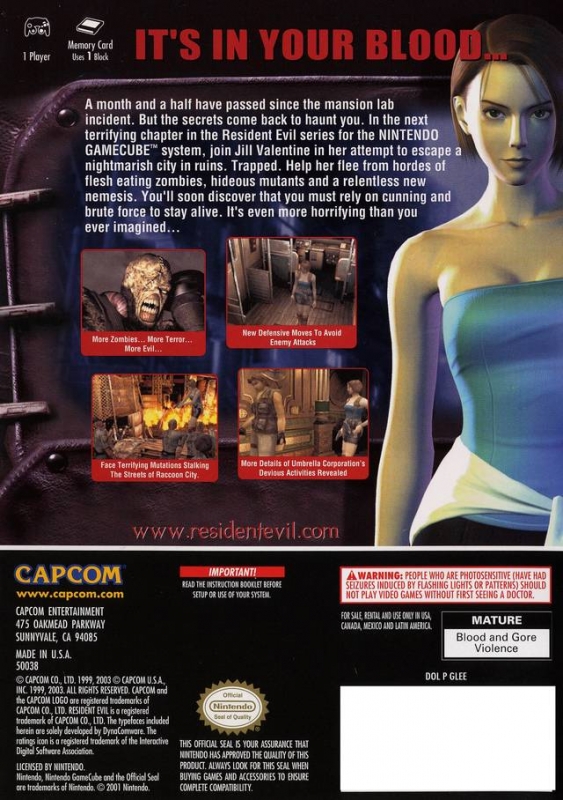 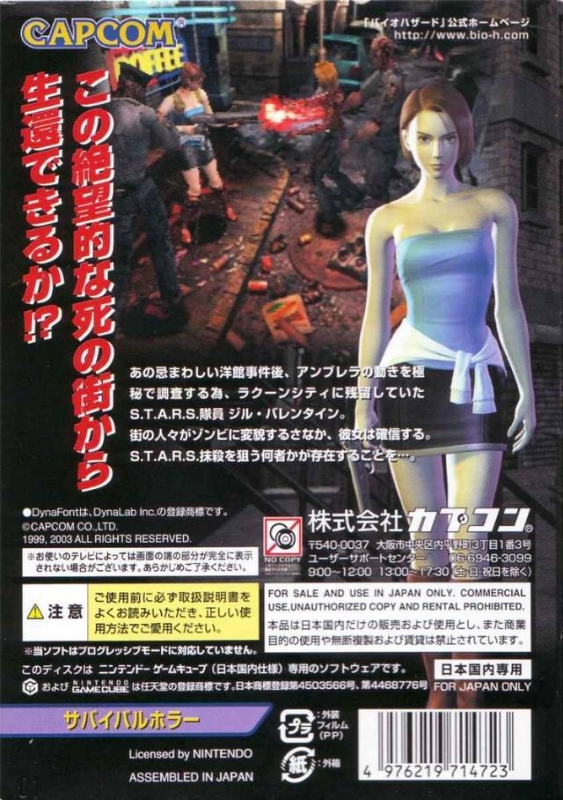 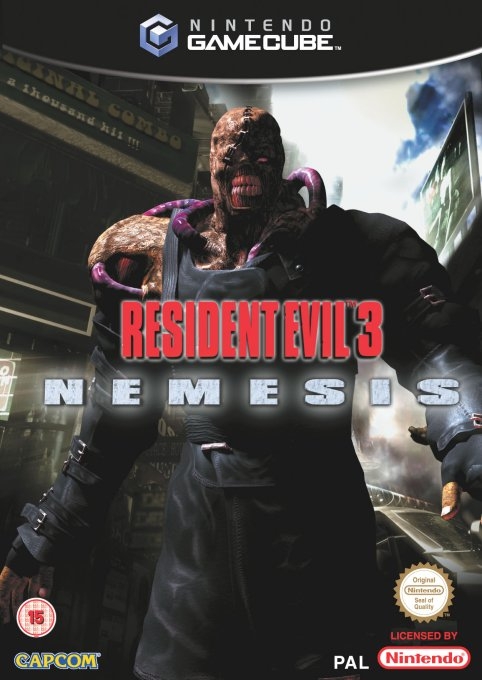 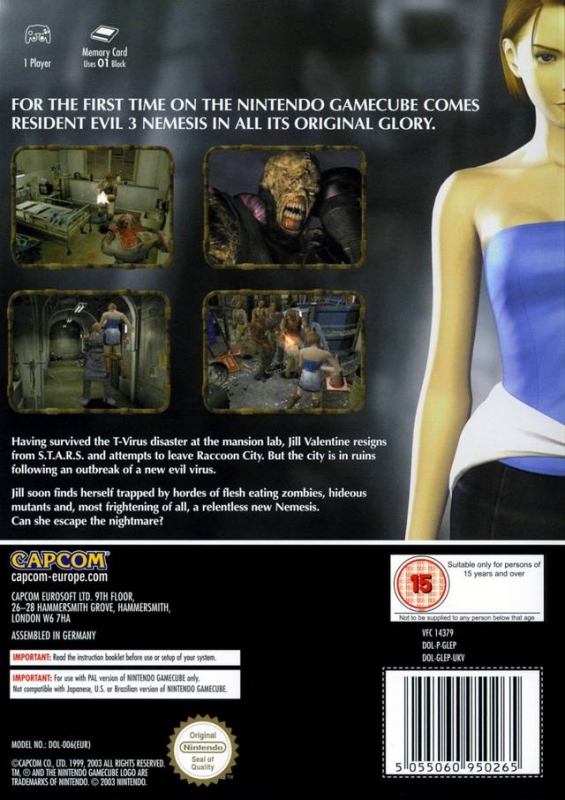 Barry Burton ending:
The only way to see Barry is if ending B is unlocked. To get this ending, jump off the bridge when fighting Nemesis Type B. After the jump off decision, the final area of the game will take a somewhat different path. You will have to fight off Nicholai in a chopper. It is recommended that you bring a Magnum and Grenade Launcher (or Rocket Launcher if it has been found). You can also choose to negotiate with him.

Barry Burton ending 2:
Jump off the bridge. Play until you reach the room with the Radar Tracker. Take it, and try to leave the room using the door you entered. Nicholai will call you. After killing him, Carlos will enter. After talking with him, leave the room (do not use the hatch to the Rail Cannon). Turn around and get in the radar device room again. Carlos and Jill will listen to a radio call from Barry and the game will continue with the final scenes.

Mercenary mode:
Successfully complete the game one time to unlock mercenary mode and save the "Next Game" file. Start a new game, choose that saved game, then select mercenary mode. This mode involves controlling Carlos, Mikhal, or Nikoli from the train to the starting room with a two minute timer. Killing the various opponents and rescuing civilians during the journey will add more time to the clock. A rank and money will be awarded after the game is completed. The money can be used to purchase better weapons for the next mercenary mode game.

Alternate costumes:
Successfully complete the game under the easy and difficulty settings with any rank better than F to unlock new costumes for Jill in the Boutique.

Epilogues:
Successfully complete the game under the hard difficulty setting to unlock Epilogues. Epilogues are a short diary description of each character in the entire Resident Evil series which describes what happened with that specific person after their adventure. Getting better ratings can unlock the other epilogues. There are eight total Epilogues that can be unlocked.

Jill's diary:
To get Jill's Diary (a file), collect all thirty files in the game in order. Then the first file (Instructions Manual, blue) will become Jill's Diary.

Enhanced Weapons/Ammo:
You can only create enhanced ammo while playing under the hard difficulty setting. When creating ammo with the reloading tool, save enough gunpowder to mix up the same type of ammo eight times. On the eighth time, the game will prompt "Do you want to create the enhanced ammo?". Select "Yes". This ammo is more powerful, may have slightly different effects, and once loaded into a weapon will change it into an "enhanced weapon". You can only create two types of enhanced ammo: 9mm handgun bullets and shot gun shells. The only different effects the new bullets have is that they are far more powerful.

Saving A.R. ammunition:
When you are low on ammunition, go to a nearby storage system and take out A.S. rounds. Combine it with the A.R. and put the rounds back into storage. You will be restored and still have space for more items.

Saving shotgun ammunition:
Wait for a zombie to get close, then aim up and you will shoot him in the head, killing him with one shot.

Wait for two zombies to line up close to each other. Then, aim up and fire to shoot both their heads off. Note: This may require some practice.

Sneak past monsters:
If you can walk behind a monster, keep tapping Run quickly. Jill will not make any sound of footsteps and seems to "glide". The monsters cannot hear you and subsequently will not turn around and attack. Note: This works best with the Drain Deimos.

Additional slots:
When you first get to the trolley, Carlos will give you a "fanny" pack. After you finish the game, you will keep those additional two slots in the game.

Starting the trolley:
The oil additive needed to start the trolley is located in a locked store room inside the sales office. To unlock it, pick up the flashy remote on a desk to turn on a TV. You will see a commercial about some product from Ubrella Corp. Make note of that product (Safsprin, Adravil, Aquacure, etc.). Go to the nearby computer where Carlos just shot his zombied friend. You will be prompted for a password. Type in the name of the product to unlocked the storeroom.

Fighting Nemesis:
The Nemesis is left-handed and uses that hand to grab you. When fighting him, shoot him two times and run past his right side. Shoot twice and repeat the process. Note: This only works when he does not have his Rocket Launcher and if you are using the handgun.

Nemesis Type 2 in mercenary mode and 220 second bonus:
Get to the parking garage, then exit out of the door. If you still have over two minutes left, run to the end of the bus and you will see Nemisis Type 2. He will jump down and come after you. You can run around him to avoid his attacks and save ammo or you can kill him for 220 seconds. Note: This trick best works with Mikhail

Destroy Nemesis' Rocket Launcher:
This trick requires a large number of health items and first aid sprays. When you fight the Nemesis with the Rocket Launcher, aim up. If he targets you, run and try to make him waste ammunition. After four to seven shots from him, he will reload, but the rocket launcher will turn red and explode.

When you hear the reload sound he makes with his launcher and he aims at you, shoot him when he is about to shoot you. Almost always, the launcher will backfire and explode.

Loose parts from Nemesis:
Whenever you kill Nemesis in Hard Mode, you can always pick up a package that he drops, containing gun parts. Once these are assembled, they form the Eagle 6.0 STI. This gun is more convenient than the standard handgun. Once you get close to a zombie, aim directly at its head and fire. If performed correctly, you will shoot its head off just like what a magnum regularly would, and it only consumes regular handgun bullets.

Fighting a Doggie:
Knock down a Doggie, then aim down and you can fire faster on it. If you do not aim down, you have to wait until the Doggie stands up.

Humanoid sighting:
When fighting the Nemesis for the last time in the Rail Gun Room, you will see a figure in the background, similar to Nemesis. Closely observe the creature to see that it is the Humanoid, or the Mutated William Burken from Resident Evil 2. When you press Action, Jill describes it as "One of Umbrella's New Biotech Weapons".

Alternate meeting with Carlos:
You can meet Carlos at the top floor of the newspaper building instead of the restaurant when you first come out of the area after you fought the first Licker. You will hear Carlos taking out a few zombies. Ignore that and go to Jill's left. Enter the door at that location. You will now be at the alley directly behind the restaurant. From here, make your way to the newspaper office. After meeting Carlos, Nemesis appears. You will get to make a choice to "Jump out the window", or "Hide in the back". Note: To get the green gem, go back to the restaurant and go down the ladder. Then, check the police officer down there. He should have it.

Aqua Hunter caution as Carlos:
When you gain control of Carlos, beware of the Aqua Hunters that are in the Artificial Environment tank. When fighting them, keep firing your weapon as much as possible. When they grab you, tap on the buttons as much as you can or they will eat you whole.

The Worm:
You actually do not have to fight the Worm the first time you meet him, when you fall into the sewer. After he pops out of the wall the first time, just run to your right and hit the first switch (make sure the worm comes out of the wall). Then, run to the other side of the sewer and hit the second switch (this one may be difficult -- also make sure the worm comes out again). Then, press the button for the ladder and you just saved yourself some life and ammunition.

Defeating the Worm:
Use the following trick to defeat the Worm without wasting good ammunition. Walk slightly into the Worm's little section slowly until the screen starts to shake and he appears. Back up to the wall and shoot him with the handgun. If the worm does reach you, which is not very often, Jill will usually dodge to the right. Repeat until it is defeated. To defeat the second Worm, run around for two minutes and try not to take damage. After that time, the light pole will begin to spark. Use the handgun to shoot in the direction of the two sparking poles and they will fall into a puddle. Stand near (not in) the puddle, then wait for the worm to go into the water and fry to death.

Custom shotgun:
Play the game under the hard difficulty setting. Defeat Nemesis for the fourth time and pick up the small silver box that he dropped. It will contain M37 Parts A. Defeat Nemesis a fifth time and get the M37 Parts B. Combine these two parts to get a western custom shotgun with six rounds. This gun uses the standard 12 gauge shotgun shells.

There are two different ways to get the Grenade launcher. There is one in the Sub-Station when the game is first played. The other is available after the game has been completed once. Go to the S.T.A.R.S. office and go were the Magnum gun was originally obtained.

Conserve assault rifle ammunition:
Set the mode to "Manual". Every time you shoot, only three rounds will be used and the total percentage of ammo left will decrease by about 1%. Use the assault rifle like this until you can fire it without wasting large amounts of ammunition when it is set to "Auto".

Get vaccine:
When playing as Carlos in the Hospital 4F, go to the unlocked Sickroom and look at the corner where the movable cabinet is located. Remember where it is. Read the note on the dead doctor's hands in that room. Use the Sickroom Key on the next room over. In that room, push the cabinet in the opposite corner of where the cabinet in the previous room was found. For example, if the first cabinet is in the upper left corner of the first sickroom, than push the second cabinet into upper right corner of the second sickroom. A painting in the room will slide, revealing a machine holding the vaccine base. Enter the numbers that were on the dead doctor's note in order to obtain the vaccine base.