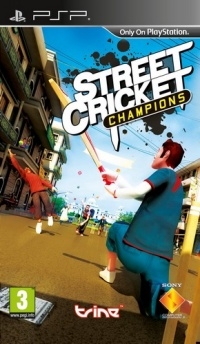 The first ever cricket game developed by an Indian game development studio on PS2, Street Cricket Champions is a true depiction of Flair, style, trickery, and the passion with which the game is played on the streets of India

Street Cricket Champions offers fast paced arcade style cricket action previously never witness before in any other cricket game with a focus on team play and tactics, reflecting the culture of freestyle cricket played in the streets and back lots around the country.

Street Cricket Champions consists of four on four cricket games. Players try to score run points, which are scored through various cricket shots, various batting trick shots, shot faking, blocking, diving for the base etc and features over 13 detailed play environments from across India and around the world.

All the characters have their own unique abilities and skill sets. Street Cricket Champions features over 10 unique characters plus the ability to create your own from hundreds of customization options.