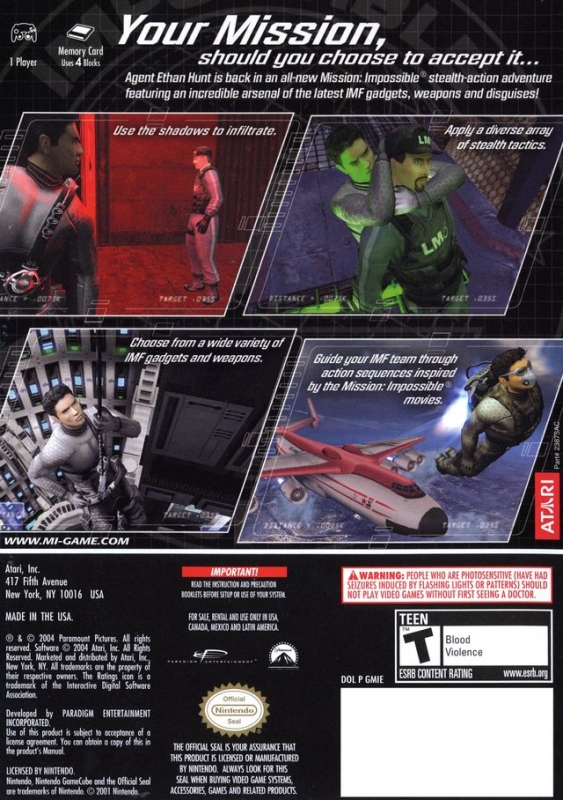 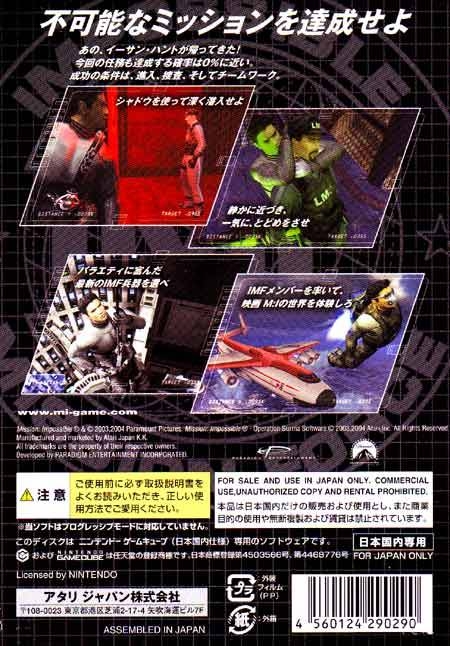 Ethan Hunt returns to make the impossible possible in this slick caper of cloak, dagger and Electronic War Gun.

Mission: Impossible - Operation Surma sends the ever-evasive Ethan Hunt and his Impossible Mission Force (IMF) crew to international locales to stop the Surma Corporation's latest plans for market domination. This enigmatic organization plans to unleash a lethal computer virus that can disable any computer in the world. One false step, however, and the secretary will disavow any knowledge ... you know the drill.

In Operation Surma, you won't stumble across an unholy arsenal of cutting-edge weapons to blast your enemies to high heaven. Noise draws unwanted attention to your efforts. Ethan instead prefers silent-but-deadly stealth. Big guns aren't really needed, because Ethan can silently and swiftly disptach a man with his bare hands.

Where Operation Surma lacks in weapons it makes up in gadgets second only to those of that 00 guy from England. The gadget players will use the most is the Electronic Lock Pick, which allows you to hack into the Surma security systems. Set off an alarm? No problem, hack into the nearest alarm disabler. This gives the all-clear that the intruder has been captured. There's nothing like giving the hapless guards a false sense of security to give you more confidence.

Ethan's IMF contact lenses display a level map at the screen's bottom left and give Ethan night-vision capabilities to see electronic alarm tripwires and other traps that lie concealed lurk in the gloom. The Electronic War Gun disables surveillance cameras and creates distractions to lure guards from their posts.

All the gadgets in the world, however, can't help Ethan move undetected from shadow to shadow and take out Surma guards. That's your job. The shadows has different shades, making finding the darkest ones vital. With the help of a stealth meter and a 360-degree view, you hide Ethan in dark corners, then sneak out and surprise unsuspecting guards with quick strikes. You don't want to leave a body in plain view of a security camera, so you'll often need to dump the evidence in the shadows.

Running and gunning is sometimes a good tactic, but don't overuse it. In an unusual twist, Ethan can try to get the upper hand against Surma by forming uneasy alliances with unsavory characters.

IMF computer expert Luther Stickell (voiced by Ving Rhames) feeds objectives to Ethan and shows the next objective's location on the map. The interaction between Luther and Ethan can be a bit clunky at times (at one climactic moment, Luther sounds as excited as a wet rag), but Luther is one sharp computer whiz.

Overall, the tale of espionage has more twists and turns than ten roller coasters. You get assassination, disguises, and more. Is there a mole in the team?

The learning curve for the controls is a short. Operation Surma does a good job of challenging you to think of alternative ways to tackle a sticky situation. If you have a hankering for stealth, you'll want to slip into the shadows with this addictive third-person adventure.