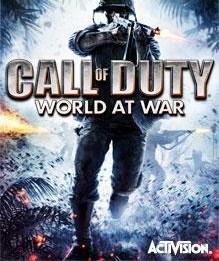 Fire-bombed Berlin provides the backdrop for “Nightfire,“ an intense battlefield for mid to large-scale team games. Shelled buildings and ruins of the city provide coverage among the war-ravaged streets, and the flames of the burning city expose the enemy running through the night. Fight for your life knowing that this fiery urban battlefield may soon be your grave.

“Knee Deep“ takes place on the island of Peleliu in a once tranquil village turned chaotic Japanese command center. Aiming to retrieve the valuable intel housed in the command post, troops fight through the jungle, wade knee deep in streams and take battle positions in fortified Japanese bunkers to secure this important communication center. Ideal for all combat scenarios and designed for larger team games and objective matches.

The fan favorite 4-player co-op Nazi Zombies Bonus Mode returns with “Verrückt,“ a terrifying Zombie asylum located in the outskirts of Berlin. The map splits the four players into pairs, challenging the two teams to find each other for survival. Featuring more weapons, perks via the addition of Perks-a-Cola machines, electroshock defenses and the endless Nazi Zombie horde, “Verrückt“ will push you to the edge of your sanity.