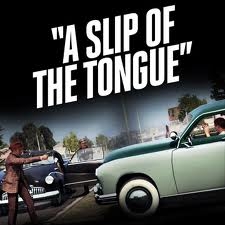 The “A Slip of the Tongue” DLC is a case offered while in the Traffic Deparment. It can be downloaded from Xbox Live, or PSN, and is offered as a pre-order bonus by Wal-Mart. This DLC deals with Detective Cole Phelps and Stefan Bekowsky investigating a simple car theft, which is not exactly as simple. It is up to the dectives to follow the paper trail in order to solve this case.