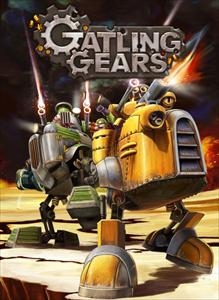 Save the world guns blazing!

Gatling Gears is a twin-stick top-down shooter for Xbox LIVE Arcade, PlayStation Network, and PC. When the Empire begins its reign of destruction in a thirst for natural resources, it’s up to Max Brawley, a retired Gatling Gear pilot, to stop them. Together with his niece and his trusty Gatling Gear unit he must fight his way to the heart of the Empire and eliminate the destruction at its source.