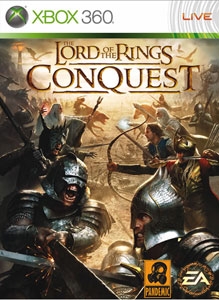 The Lord of the Rings: Conquest (XBL)

For the first time, play as Evil characters in a brand new, 'Evil' campaign. Battle through scenarios after Frodo failed to destroy the One Ring; it’s good to be bad. Acclaimed Battlefront gameplay in a fantasy setting allows players to choose the way they fight, as Warrior, Archer, Mage or Scout in melee and ranged combat. Online multiplayer - pick your allegiance then battle in 16-player online clashes, or in 4-player co-op campaigns. Local multiplayer - split-screen with up to 4 players competitively or 2 player co-op. A massive cast of characters & weapons adds great depth to the gameplay: Heroes, Wargs, Ents, Oliphaunts, Cave-trolls, the Balrog, Nazgul, ballistae, and more.