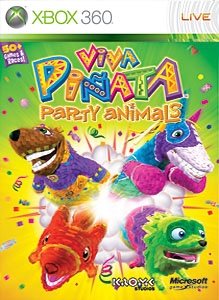 In "Viva Piata: Party Animals," players control the fame, fortune and destiny of their favorite characters: Fergy Fudgehog, Paulie Pretztail, Franklin Fizzlybear and Hudson Horstachio, as they compete in a variety of zany battles and races. This outrageously fun new social party game for players of all ages and types was inspired by the critically acclaimed and uniquely innovative "Viva Piata" Xbox 360 video game and 4Kids Entertainment animated television series.