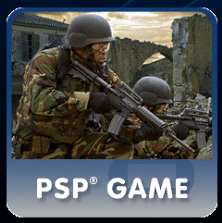 Wherever Freedom is Threatened, the SEALs Are There.

*For wireless play, this game may not be compatible with the UMD disc version of the game.