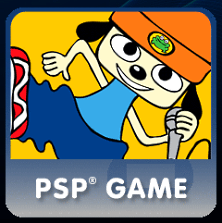 The Original Music Game Comes Back for a PSP system Encore!

In 1997, Parappa the Rapper released on the Playstation introducing the music genre to console gaming. The game was a living cartoon, where players would listen to catchy rap songs and attempt to "rap" by pressing buttons to the beat.

Now Parappa returns to win over another generation of fans with all new PSP system exclusive features! Join Parappa once again in his quest to win the heart of Sunny Funny and learn from favorite Rap Masters like -- Chop Chop Master Onion, Instructor Mooselini, and Cheap Cheap The Cooking Chicken. Complete with all the music and addictive gameplay that made it an instant classic, Parappa the Rapper is sure to please fans both old and new!