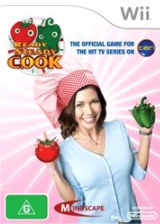 A true adaptation of the popular TV show, “Ready Steady Cook – The Game” lets you master delicious recipes; against the clock!

A player starts by choosing a kitchen: red tomato or green pepper and a Chef to play along with (from 5 different chefs and cuisines – Mediterranean, Continental, Indian, Asian, Mexican)

A player can select 1 from 4 of the value bags available. From Budget and Classic to Bistro and Gourmet (which will need to be unlocked as play progresses.)

The player cooks against the clock while following the Chef’s instructions. Pick ingredients, mixing, breaking eggs, cutting, frying, opening cans, serving up to the plate.

During the show, the player gets feedback from the chef, such as “well done” or “I’ll fix it”.

After the time is up, the audience will judge who the winner is with the stage light system. The audience’s vote will be influenced by the number of tasks completed and the difficulty of the ingredients involved.

If the dish is good the player will wins and new ingredients will be unlocked in the supermarket and the recipe will be written into the cookery book.