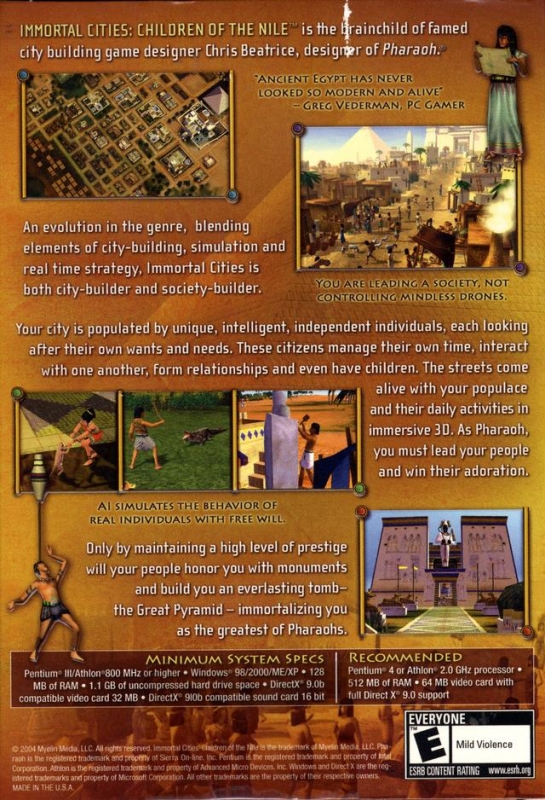 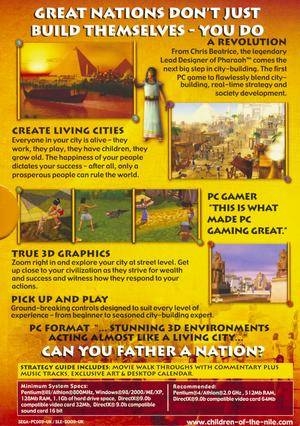 Children of the Nile™ is a unique gem of a city-building game, unparalleled in both grandeur and attention to detail.

As Pharaoh you will guide your people through thousands of years of history: from simple hunter-gatherers to the creation of an immortal civilization. Guide your people well and you will build breathtaking pyramids, explore the ancient world and wage war against your enemies.

Every inhabitant of your city is a fully developed, living person – part of an individual family and household with wants and needs. From priests to entertainers, scribes to laborers, even the royal family… everyone will need to eat and that’s just the beginning. Every block of stone that is hauled to your pyramid will be pulled by people who pray to the gods in temples of your choosing. Under your supervision, local economies will thrive as goods from reed baskets to gold jewelry will be created, purchased and enjoyed by the inhabitants of your city.

To achieve immortality a Pharaoh must look outside his city’s borders and make an impact on the world. Explore and open trade with foreign neighbors and you will have reason to build commemorative wonders that will tell the tale of your dynasty for all time. As your prestige rises so too will your ability to draw more people to your ambitious endeavors and build cities that are truly epic.

How will your dynasty be remembered?

Children of the Nile: Alexandria Expansion

Using the unique city-building dynamics of Children of the Nile, you will carve out a new dynasty to rule all of Egypt, and build the greatest city of the ancient world! Each person in your city is a fully developed person, with wants and needs. Tend to their needs and they will work for you so that you can create a powerful empire and a lasting legacy.

In Alexandria, you assume the role of the new Pharaohs of Egypt, in a three-scenario mini-campaign set during and after the final stages of Alexander the Great's career. Consolidate your power as Alexander's former lieutenants vie for control of his empire, all while growing a massive new Egyptian capital and constructing new massive monuments: the Great Lighthouse and Great Library of Alexandria!