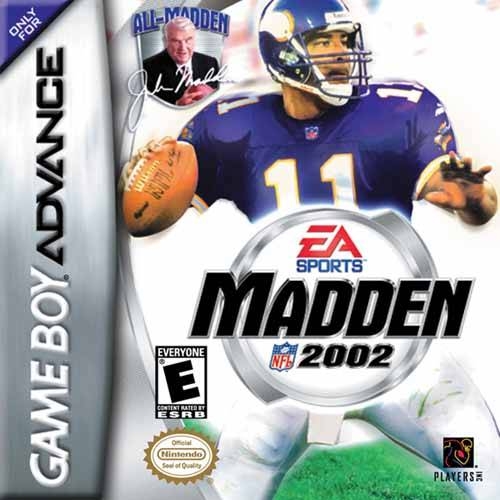 NFL™ football is back, and so is Madden! For the 12th year in a row, Madden NFL Football brings the realism of the pro gridiron right to your fingertips. With all the teams, players, and features that you've come to know and love, Madden puts you right on the field with the big hitters!

Play a full season with your favorite team and take them to the Super Bowl, or try the franchise mode and build a dynasty. You can even create teams and players so you can start from scratch! With all-new realistic player animations, Madden Cards, a training mode, and the Two-Minute Drill, Madden truly has it all!

Gameplay:
Complete with all 31 NFL teams and legendary teams of years past, Madden NFL 2002 delivers the unparalleled heart-felt emotion and hard-hitting action of the NFL.

Taking you beyond broadcast, Madden NFL 2002 lets you play in Exhibition, Season, Playoff, Two-Minute Drill, and Tournament modes. Or play in Franchise mode, where you take complete control of the team in your quest for NFL glory. Madden NFL 2002 brings the real NFL to your fingertips.
Features: