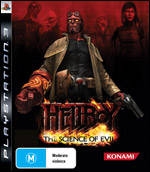 Hellboy: The Science of Evil (PS3)

With one successful film already out and a second due for release during the Summer of 2008, this is the perfect time to be unveiling a new Hellboy game, and Science Of Evil has numerous benefits thanks to the upcoming movie.

The first, and possibly most significant is that the story the game was created from was written especially by comic creator Mike Mignola. His vision and creative mind were the driving force behind the very beginning of Hellboy so all of the same dark humour and action the comics were and still are famed for is here in abundance.

The second is that thanks to assistance from the movie director Guillermo del Toro, at the helm for the movie sequel, clips and action sequences from that film will be present here too and the characters from the movie also voice their characters in the game to add to the realism.

Science of Evil, as you would expect, is a brawling action title that really shows you the brutal strength Hellboy possesses. His powers can rip apart the scenery and levels and use them as weapons against the enemy and this is often a necessity as wave upon wave of attackers descend on Hellboy.