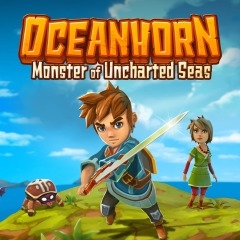 Oceanhorn: Monster of Uncharted Seas is an action-adventure RPG, developed by Cornfox & Brothers and published by FDG Entertainment, focused on an unnamed boy protagonist's quest to find his lost father and defeat Oceanhorn, the living fortress. In the game, players explore dungeons, solve puzzles, and fight monsters in real-time fights.