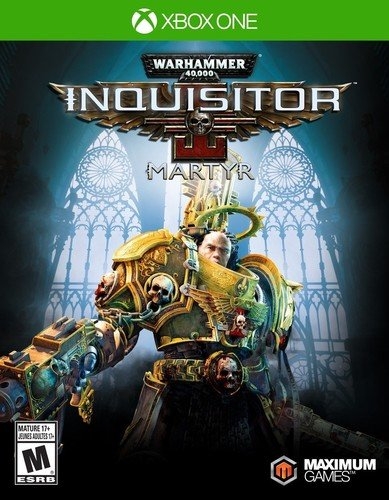 THE FIRST ACTION-RPG in the world of Warhammer 40,000

Set in the dystopian 41st millennium, Warhammer 40,000: Inquisitor – Martyr places the Inquisitors of the grim future into an Action-RPG and pits them against heretics, mutants, treacherous xenos and the daemons of the Chaos Gods.

Your mission is to purge the unclean and protect the Imperium from corruption!

Inquisitors are the fearsome and legendary secret agents of the Imperium with a wide range of unique skills, huge influence and deadly firepower. They come from diverse backgrounds and they specialize in different areas.

THEIR TASK IS DAUNTING, THEIR VIGIL IS ENDLESS.

THE NEXT MILESTONE IN THE EVOLUTION OF ACTION-RPGS

Inquisitor – Martyr is an open-world sandbox Action-RPG set in the Caligari Sector, a secluded region of the Imperium with hundreds of star systems, thousands of planets, which offers a huge variety of mission types on randomly generated maps: a persistent universe with special mini-campaigns and a storyline influenced by the community.

THERE IS ONLY WAR

A MONUMENTAL AND BRUTAL EXPERIENCE

True to the spirit of the Warhammer 40,000 universe, the gameplay incorporates tactical elements like the cover-based combat, a brand new AI and controllable vehicles, not to mention the spectacular display of destruction where attacks noticeably affect the environment.

BRUTAL FIGHTS WITH A TACTICAL LAYER

Battles are not only vicious and bloody, but the more challenging fights just got some extra flavor.

Aimed attacks at giant foes can destroy body parts, getting rid of the special abilities, not to mention the rewarding and special execution moves to finish off the bosses.

In addition to the single-player Story Mode, the Inquisitorial Campaign not only introduces the cooperative gameplay up to 4 players, but gives you the chance to join various Inquisitorial clans.

Participate in unique World Events and go on unique chains of missions that could influence the fate of the whole sector.