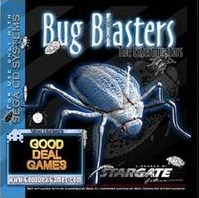 "The Humans have crushed us for years!" -- General Grub

Los Angeles, a quiet little town until... THEY CAME!
Now a terrified city crawling with crime!

A band of warrior insects calling themselves 'The league of Insects' under the control of General Grub and El Roacho, have captured City Hall and are holding Los Angeles hostage! You are the rookie member of the elite fighting force, The Bug Blasters. Accompanied by a crack team of experts, including Team Captain McVay, a veteran of the New York City Roach Wars of '79, you must vanquish the insect threat throughout the city and the long overlooked underground tunnels in which they have been swarming. Prevent these pests from further capturing and cacooning humans. You are an exterminator. Destroy the hive, and get out alive before it's too late!