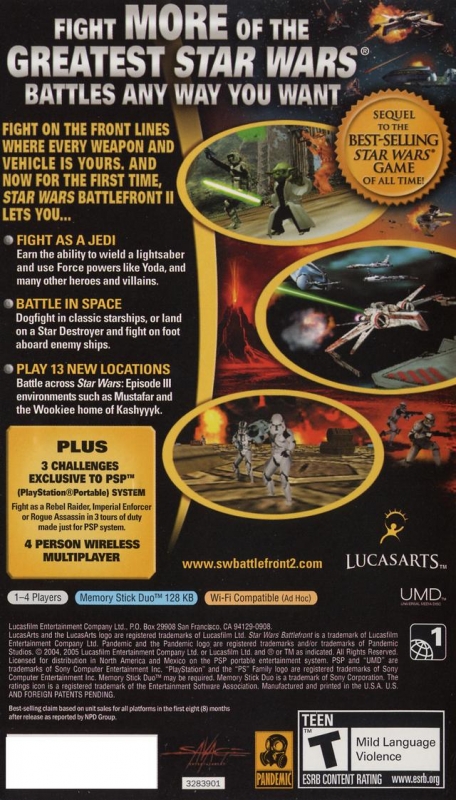 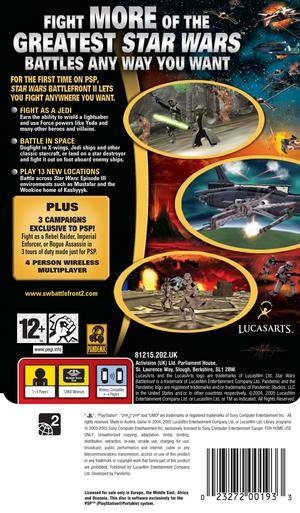 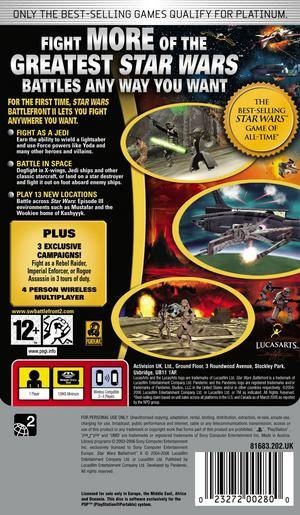 Star Wars Battlefront II takes the best-selling Star Wars video game of all time one Imperial-walker step forward with all-new space combat, playable Jedi, and never-before-seen environments straight out of the Star Wars: Episode III Revenge of the Sith movie. Fans of the original Star Wars Battlefront will also enjoy an all-new single-player experience that takes players through an epic, story-based saga where every action the player takes impacts the battlefront and, ultimately, the fate of the Star Wars galaxy.

Star Wars Battlefront II improves upon the original game's single-player experience with open-ended, mission-based objectives inspired from all six Star Wars films. The compelling storyline spans more than 16 new locations, many from the Episode III movie, including volcanic Mustafar and the space battle above Coruscant. All-new classic movie moments complete the Star Wars Battlefront II experience, as players battle within the interior of the Death Star and visit Princess Leia's blockade runner, the Tantive IV, as seen at the beginning of Episode IV A New Hope. In addition, at certain key moments within the battles, players can earn the opportunity to wield a lightsaber and use the Force as a Jedi.

For the first time ever, Star Wars Battlefront II players can engage in space combat and, during the same battle, board enemy ships to attack from within. Starting on foot inside a capital ship, players can enter the starcraft of their choice and travel into space to dogfight with the rival faction. From there, they can dock within the enemy's capital ship, overtake the ship's command posts, man its turrets to disable its shields and destroy it from within! Or, they can simply stay inside their own capital ship and defend it from attacks and enemy fire. The choice is theirs.